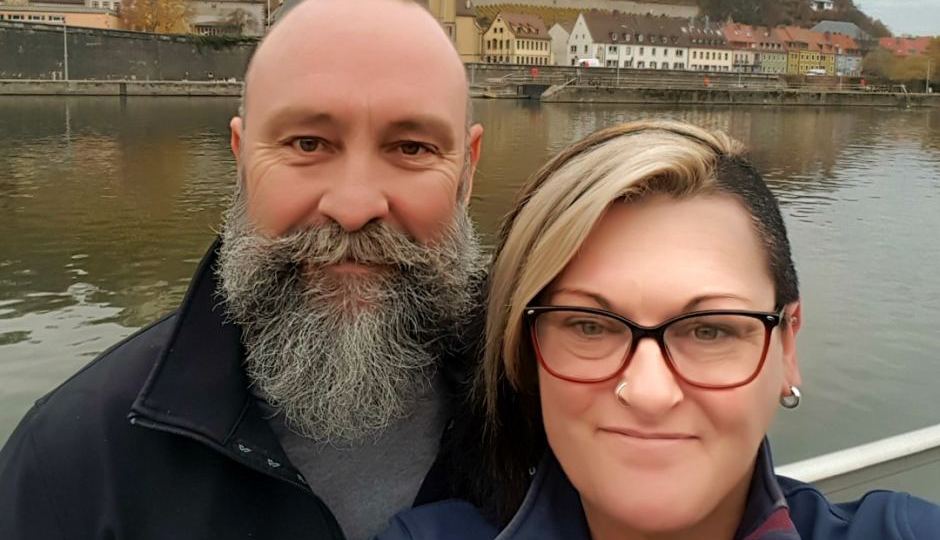 Gavin and Tina Lawrence on one of the few days on board their river cruise. Photo: Supplied

It was a holiday to remember, but for all the wrong reasons.

Gavin and Tina Lawrence had splurged more than $17,000 on a 15-day scenic river cruise from Amsterdam to Budapest as part of their honeymoon last year.

But the couple from Wollongong, south of Sydney, say the holiday quickly turned into a disappointing “disaster” after they were forced to spend half of their trip on buses due to low river levels.

“If I wanted to do a Contiki bus tour, I would have gone on one and saved myself a lot of money.”

The Lawrences are among a group of disgruntled Scenic Tours passengers testing the viability of a class action against the company, claiming it provided a poor substitute to the luxury cruises advertised, following extreme drought conditions in Europe in 2018.

It follows a similar class action against the company after cruises were interrupted due to river flooding in 2013.

The NSW Supreme Court last week determined passengers may have a case against Scenic Tours for the drought-affected cruises and ordered the company to produce documents that could help determine how many Australian consumers were affected.

Lawyer Cameron Graham said at least 14 cruises had been interrupted by low water levels, and many of his clients “didn’t get what they paid for”.

“They booked and paid for a luxury cruise and what they were provided with was something entirely different,” said Mr Graham, of Sommerville Legal.

“They had gone to Europe expecting to receive what was advertised by Scenic Tours in their brochure and what they instead got was a poor substitute.”

The court heard one couple spent less than two days of their two-week cruise on the water.

Another couple who paid more than $40,000 for their trip received just $1,000 in insurance to cover their loss.

‘We didn’t hear it from Scenic Tours’

The court heard that two days into the Lawrence’s cruise they were told to pack their bags late one night, as they’d be changing ships in the morning.

The next day, their planned cruise was substituted for a bus tour and public ferry ride.

When the couple finally boarded the replacement ship, passengers were told the toilet vacuum system was faulty and needed to be repaired.

“It was perfect weather and it was the first time we could sail and the thing broke down,” Mr Lawrence told the ABC.

Mr Lawrence said he did not realise the extent of the problem until a tour guide in one of the cities “let slip” that the boat would not be going any further than Regensburg in Germany as there was “no water in the river”.

“We were shocked, we didn’t hear it from our Scenic Tour guide,” he said.

That night, passengers received a letter on their pillows advising the final eight days of the tour would be by bus.

“We were put up in five-star hotels but we were treated like cattle, herded in, fighting over room keys and the food that was served up was slop — and I’m no snob.

“It was a dream holiday and it was just horrible.”

‘We would have got a refund’

Adelaide couple Darran and Merrilyn Kelly saved for two years for their $37,000 “Jewels of Europe” cruise but say they were bitterly disappointed when Scenic Tours failed to provide the luxury cruise experience for a least five out of the 14 days.

Mr Kelly said while the cruise was suspended, the meals they received were of “ordinary quality” and said passengers were given just one bottle of water a day in the middle of summer.

“It was devastating,” he told the ABC.

“If we had been aware of the significant risk of the river cruise not proceeding, we would have taken a credit note or refund and booked another cruise at another time.”

Mr Kelly said he hoped passengers could get their money back so they could afford another, more positive, holiday experience.

Mr Graham said there were currently anywhere between 400 and 1,200 Australian passengers who had been affected and he urged anyone else on those cruises to get in touch.

“A class action is quite an expensive exercise and because our clients are just regular consumers pursuing a large well-heeled company, they need to make sure there are enough people affected by this before they go ahead and commence a class action.”