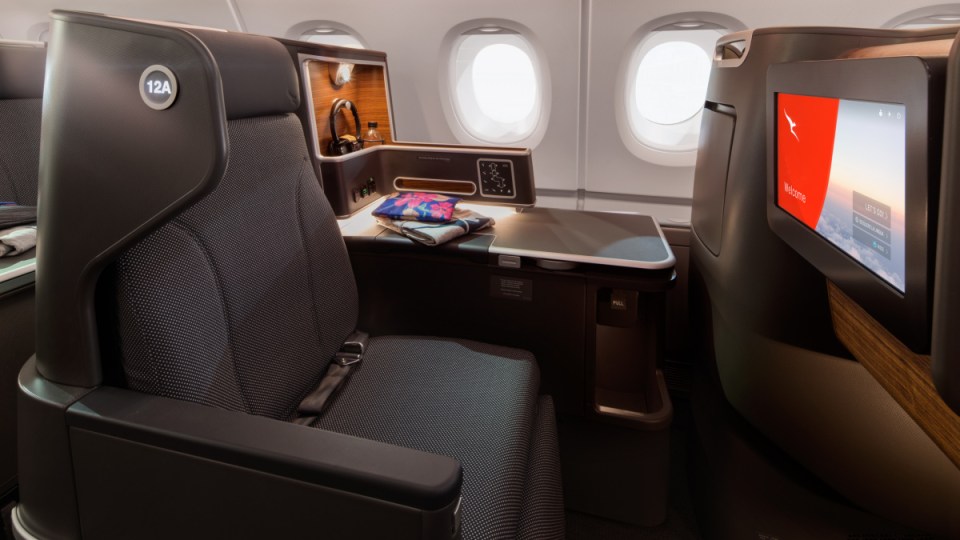 Qantas is refurbishing its fleet of A380 superjumbos, the first of which landed in Australia on October 2. Photo: Qantas

The first of the upgraded Qantas A380s lands in Australia on Wednesday, bringing with it a refurbished upper deck for premium passengers.

But those travelling in the cheap seats will only see minor differences in colour schemes and in-flight entertainment.

It will land in Sydney in the morning, from London via Singapore, and is part of an overhaul to a dozen A380s, pegged to be finished by the end of next year.

The upgrade announcement came earlier this year, at the same time as Airbus announced it was opting out of A380 production.

The aircraft was deemed by aviation experts as simply too big to remain financially viable for carriers.

Qantas started flying the A380 superjumbo in 2008, and has been a cornerstone of the carrier’s long-haul fleet.

The mid-life upgrade means they’ll probably be around for another 10 years or so, taking on the delivery of the carrier’s much-hyped non-stop flights to the US and Europe.

Qantas Group CEO Alan Joyce said the aircraft was one of the most popular among passengers, citing continued demand as the drive behind increased seat numbers in business and premium economy classes.

Onboard a refurbished Qantas A380, the upper deck has been reconfigured exclusively for business and premium economy passengers, and includes upgraded lounges.

Business passengers will notice the Skybeds have been scrapped, replaced by the same suites aboard a Boeing 787 Dreamliner.

It means more space per passenger, upgraded entertainment systems, and direct aisle access for every seat.

The layout also results in seven extra pods per plane.

Premium economy passengers also get a taste of Dreamliner life, with their seats being switched for the Boeing equivalent.

This offers a comfier seat design, more storage space and a bigger personal in-seat screen. It also means Qantas has 25 extra seats to sell in this class, per flight.

“Working with Airbus, we’ve been able to use the cabin space more efficiently and improve the economics of the aircraft while also providing a better experience in every part of the aircraft,” Mr Joyce said in a statement on Tuesday.

However, there won’t be many noticeable changes for passengers travelling the polar-opposite classes.

The fundamentals of the first-class suites will remain the same.

The 14 suites won’t be shifted to the upper deck, but will get better cushioning and bigger entertainment screens.

In economy, the decor will be changed and the entertainment system upgraded.

There will, however, be 30 less economy seats per craft. There’s no indication this will equate to a larger pitch (read: more leg room) for passengers.

Upgraded Qantas A380 lands in Australia for long haul