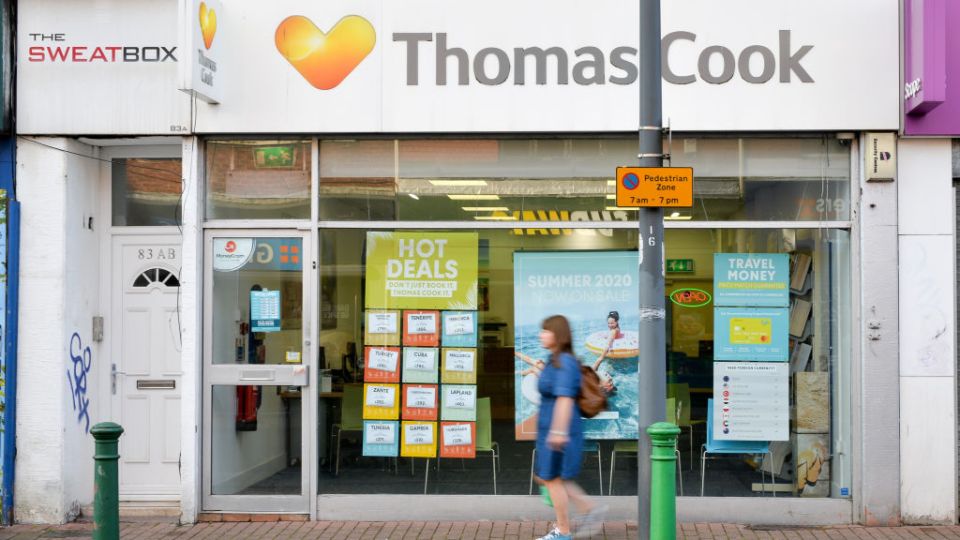 A closed Thomas Cook shop on East Street, Bedminster, Bristol, as the 178-year-old tour operator Thomas Cook which has ceased trading with immediate effect after failing in a final bid to secure a rescue package from creditors.

“We have been approached for support and we’re assessing what help we may be able to provide,” a Qantas spokesman said.

Anyone who has booked through Thomas Cook to come to Australia will be refunded.

Australia’s foreign affairs department is encouraging people affected by the fallout to visit the company’s website or contact the UK’s civil aviation authority.

The request for assistance comes after the collapse of the famous British travel agency left 600,000 holidaymakers stranded in hotels, resorts and airports around the world.

Airline and travel shares soared on hopes some firms will pick up business following the collapse of Thomas Cook. More here: https://t.co/NBogx3llxU pic.twitter.com/LRzBFPOV6a

Dubbed ‘Operation Matterhorn’, it will be the largest repatriation effort since World War II, and overseen by the British government.

A “shadow airline” will run for a fortnight to help repatriate the 155,000 British tourists affected by the travel company’s collapse.

Customers will be on special free flights or booked on to other scheduled airlines, such as Qantas, at no extra cost. Details of each flight will be posted on the company’s website as soon as they are available.

Thomas Cook was the world’s oldest travel company, handling about 19 million travellers a year in 16 countries.

The company went into liquidation after last-ditch talks to raise fresh funding foundered. The collapse has left 22,000 jobs at risk worldwide, including 9000 in Britain.

A £900-million ($A1.65 billion) rescue deal had been secured, led by Thomas Cook’s largest shareholder, Chinese company Fosun, in August. But a recent demand from its banks to raise a further £200 million in contingency funding had put the deal in doubt.

Meanwhile, online travel agent Webjet looks set to take an earnings hit and could write off $43.7 million following the sudden demise of the 178-year-old Thomas Cook.