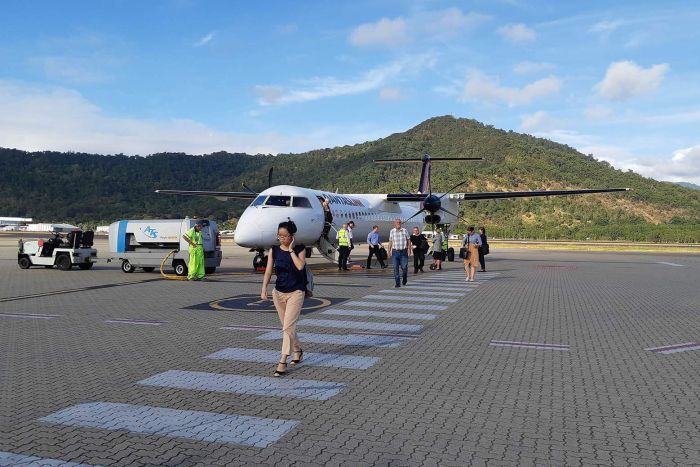 Passengers on a regional Queensland flight have described the moment one of the propellers on a twin-engine plane slowed to a halt mid-air.

The Qantas flight from Cairns to Townsville had only just departed when an engine issue forced it to turn back.

Passenger Rodney Hyman watched from his window seat as one of the two propellers keeping the plane airborne slowed to a stop.

“Probably about 15 or 20 minutes into the flight – it pretty well shut down,” he said.

“We just noticed that it started slowing even further, and then obviously the cockpit staff, I believe, must have shut the engine down.

“The propeller was turning very slowly and the captain came on the loudspeaker and just let everyone know they were turning back to Cairns because of the engine issue.”

The aircraft turned back to Cairns and flew in a holding pattern before landing without incident – to the applause of passengers onboard.

A Qantas spokesman confirmed the engine was shut down as a precaution.

“One of the engines displayed an oil indication warning and the captain of the aircraft made the decision to return to Cairns,” the spokesman said.

“The aircraft landed safely and passengers will be re-accommodated on other services today.”

He said the planes were designed to safely operate on just one engine.

Mr Hyman said he and other passengers remained calm throughout the ordeal, and praised the professionalism of the flight crew.

“It was very calm and rational onboard,” he said.

“It’s one of the more interesting commutes to work I’ve had.”