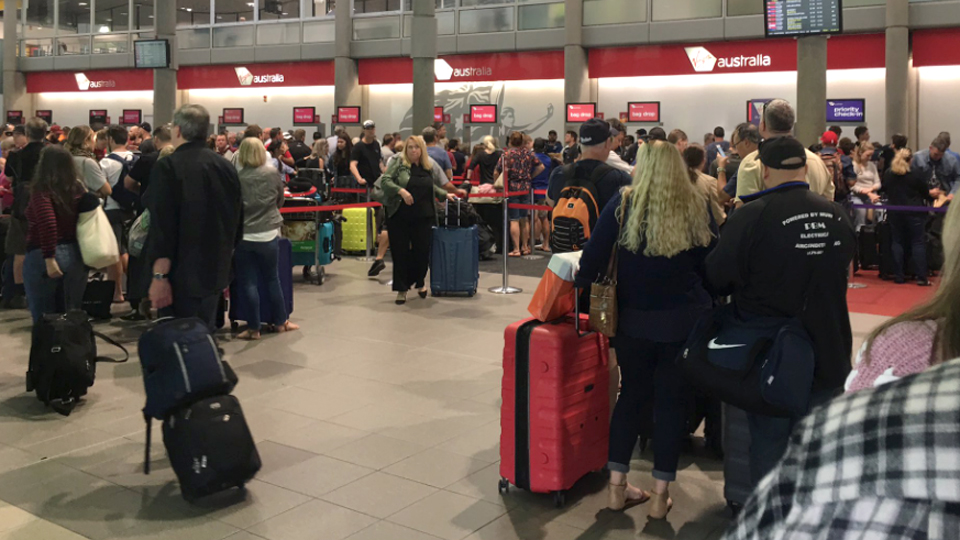 There were lengthy queues at the Virgin counters at Brisbane Airport. Photo: Twitter/Zane Bojack

There was chaos at airports across the country on Monday afternoon when Virgin Australia’s check-in system failed, forcing lengthy delays on customers.

The airline said in a tweet about 1pm that the outage had affected its entire check-in system.

“As a result, we are experiencing congestion at a number of our check-in halls at ports and some flights have been delayed,” it said.

Customers took to social media to complain about the hold-ups, and being unable to print boarding passes or baggage labels. Among them was ABC Grandstand commentator Zane Bojack, who said there was chaos in the terminal at Brisbane Airport.

Impressed to see how VA staff dealt with the chaos. Not easy. Our flight only delayed 1/2 hr at this stage.

Massively impressed with @VirginAustralia staff at the Melbourne domestic terminal today – there is an entire system outage and there’s a lot of confusion, agitated customers.

It’s not fun but these things happen.

Virgin Australia issues again, ticketing system just crashed and half the passengers can’t board….sitting on tarmac for another so far…

Others complained about being likely to miss international connections because of the delays.

In response, Virgin said the outage was a technical issue. IT teams were working to resolve it, is said, but gave no timeframe for resolution.

Our IT teams are currently working to resolve this issue. We apologise for the inconvenience caused and will keep you updated as more information comes to hand.

The Virgin Australia IT outage follows the failure of electronic passport machines at Sydney, Melbourne and Brisbane airports on April 29, causing lengthy delays for international passengers.