Subscribe direct to our news source →
Life Travel Why tourists might get a nasty surprise on this world-famous walk 2:55pm, Apr 5, 2019 Updated: 4:16pm, Apr 5

Two hours into our first day walking the Cinque Terre, we came across a hiker on one of the steepest parts of the beautiful, world-famous trails.

He was fit, well-equipped with poles and proper boots, but clearly terrified. To pass each other, we had to turn sideways on the narrow path which dropped off vertically to one side.

“Not easy, is it?”, we joked as we came face to face. “I’m not enjoying this,” the traveller replied, his face dripping with sweat, “I’m scared of heights”. He’d travelled thousands of kilometres to tick the Cinque Terre off his bucket list, but found the reality very different from the romance.

As he discovered, over-tourism and erosion have left the Cinque Terre’s stunning, vertiginous paths often poorly maintained and difficult in many places. Local authorities are considering fining travellers who tackle the paths in flip-flops or poorly prepared, making headlines around the world.

Italian tourist authorities told The New Daily that “you have to be really careful to wear the right type of shoes for the hiking activity, otherwise you might be fined”, but added they were still discussing whether to introduce penalties.

The trouble is, the Cinque Terre draws millions of travellers from around the world with the notion of wandering an old 13-kilometre seaside path between five picturesque cliffside towns.

“People assume because it’s so well-known it’s going to be easy, but it’s challenging, even difficult, in parts,” says Australian walking tour operator Simon Tancred, whose company, Hidden Italy, has been bringing travellers here since 1993.

He recalls a walker collapsing on the trail, and the rescue requiring 11 people because of the path’s inaccessibility. Tancred’s local contacts believe “the law will go through and they fully agree with it, mainly because the nature of the trail requires suitable footwear and also means that rescues are very difficult and expensive”.

In March 2019, two of the most popular portions of the famous blue path or Sentiero Azzurro are closed indefinitely due to land slips. The detours that replace them require fitness and proper gear.

While it’s still possible to walk between the southernmost villages of Riomaggiore, Manarola and Corniglia, detours take hikers up steep, rocky paths away from the sea. The trails are rough, with holes and gaps, often beside steep plunges down cliffs to the sea or into valleys. 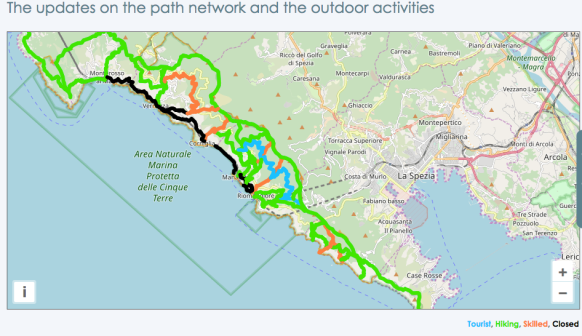 Some walkers tackle it in flip flops, or platform shoes; we even passed a group in bikinis. And at the beginning and end of every day’s hike, the trains and platforms are crowded with commuting hikers.

On the upside, says Simon Tancred, the detour paths may leave the coast, but are scenic and more interesting than the closed coastal path which can be “quite dreary, and goes along the railway line”.

Overall, travellers shouldn’t be obsessed with walking between the five towns only. There are hundreds of different paths in the region – including within Portofino Natural Park and to San Fruttuoso abbey – that can be done as day walks linked by trains, ferries and buses. Tancred suggests visitors will find worthwhile coastal walking on less-famous trails close by, and elsewhere in Italy, too, such as on the Amalfi Coast, or Sicily and the Egadi Islands.

But many will continue to be lured by the Cinque Terre, which stars on the cover of Lonely Planet’s Italy guide.

Lonely Planet rhapsodises of the Cinque Terre: “Set amid some of the most dramatic coastal scenery on the planet, these five ingeniously constructed fishing villages can bolster the most jaded of spirits”, while warning the Unesco World Heritage Site “isn’t the undiscovered Eden it once was but, frankly, who cares?”.

It’s a Saturday when we decide to start our Cinque Terre walk by taking the train to Manarola and walking to Corniglia via the detour pah.

At Manarola, it’s tricky finding the right way. We follow the crowds and hit two dead ends along the coast before finding a track that zigzags up, and further up, for more than an hour, through vines and small farm plots.

It’s steep, often rocky, sometimes narrow, with sheer drops and alarming bits where much of the path has crumbled away, but at least it’s too demanding to get really busy. After a small village, it levels out and the views are spectacular.

We refuel on Fanta and tiramisu before continuing, learning we are only one-third of the way. But we’re inspired by increasingly gorgeous views across the vines and terraced farmlets down into the midnight-blue sea, dotted with boats.

After three and a half hours, we descend into Corniglia … the stations are incredibly busy with people coming and going. It’s been solid walking, much of it uphill. But at least we can tell ourselves we’ve earned our bubbly-crusted pizza and an espresso.

10 things you should always do before you fly
Today's Stories