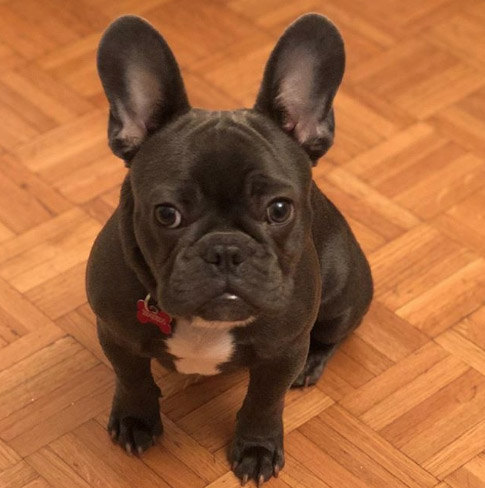 French bulldog Kobe has been flown back to the United States. Photo: Instagram

Qantas has chosen to remain tight-lipped after allowing a French bulldog, which experts say could have posed a rabies risk, to fly into Australia undetected in hand luggage.

Ex-NBA player Lamar Patterson, 27, who signed with the Brisbane Bullets earlier in the week, was detained at Brisbane Airport on Thursday, when his dog Kobe was discovered in his carry-on bag following his flight from Los Angeles.

Patterson flew with his dog on an internal American Airlines flight, which permits small pets to travel as carry-on luggage, before boarding his  flight from Los Angeles, where the dog went undetected by the Qantas cabin crew.

Kobe was seized at Brisbane Airport by Biosecurity officers, and has been sent back to the United States.

Patterson has been slapped with a $420 fine for providing a false declaration on his incoming passenger card.

“Australia is currently one of the very few countries that prides itself on being rabies-free, and because this dog was coming un-quarantined from the United States it poses a real risk,” Dr Cavey told The New Daily.

“The United States is a rabies endemic country and the dog would’ve had to have had a rabies blood test to prove that it was protected against the disease and sent to a quarantine facility for a period of time at about $177 per day,” he said.

Dr Cavey said the dog would not have had any issues flying in the cabin if it was provided food and water.

“The only issues with French bulldogs is that they have a short-breathing system and because of this it means they need adequate ventilation, he said.

The New Daily asked Qantas several specific questions, including how the national carrier allowed this to happen and why there wasn’t appropriate screening prior to Patterson boarding the flight.

It also asked if the dog made any sounds and if it went to the toilet or ate any food during the flight.

But Qantas has refused to answer The New Daily‘s questions or provide an official statement.

‘Wasn’t aware of the policies’

Speaking at a press conference on Friday, Patterson said he wasn’t aware of the travel policies and regulations in Australia

“I wasn’t aware of the policies, the rules here and the regulations so once I got here I got welcomed with a little surprise,” Patterson said.

He said he wasn’t trying to “scam” his way into Australia.

“It was on my ticket that I was travelling with my dog. I didn’t scam my way here. If this is the biggest news then Australia is a great place to be at.”

He said the dog slept more than him on the flight, but didn’t reveal details on how the dog was able to go to the toilet.

“He’s a quiet dog, he doesn’t bark, he’s settled, he slept most of the flight.

“Once I got to Australia the only reason why people found out about him is he started barking at the search dog. But it was on my ticket I was travelling with an animal.

“So I guess it was just a misunderstanding.”

In 2015, Johnny Depp and ex-wife Amber Heard failed to fill out the appropriate paperwork to bring their two Yorkshire terriers Pistol and Boo into the country.

Heard later pleaded guilty in a Queensland court to falsifying quarantine documents and copped a $1000 fine. She also issued a now infamous video apology alongside then-husband and fellow actor Depp.

In the lead-up to the court case, then-deputy PM Barnaby Joyce threatened to euthanise the pets.

“It could mean better communication and signage at airports or even a physical check – there definitely needs to be some system put in place,” Dr Bruce said.

“It could even mean that security see a boarding pass and are aware of the pet if it’s travelling to Australia to communicate the laws with the passenger,” he said.

Dogs imported to Australia must be accompanied by a valid import permit, and have undergone relevant testing and health checks signed off by a government veterinarian from the exporting country.

Then they must spend a minimum of 10 days in a government quarantine facility once arriving in Australia.