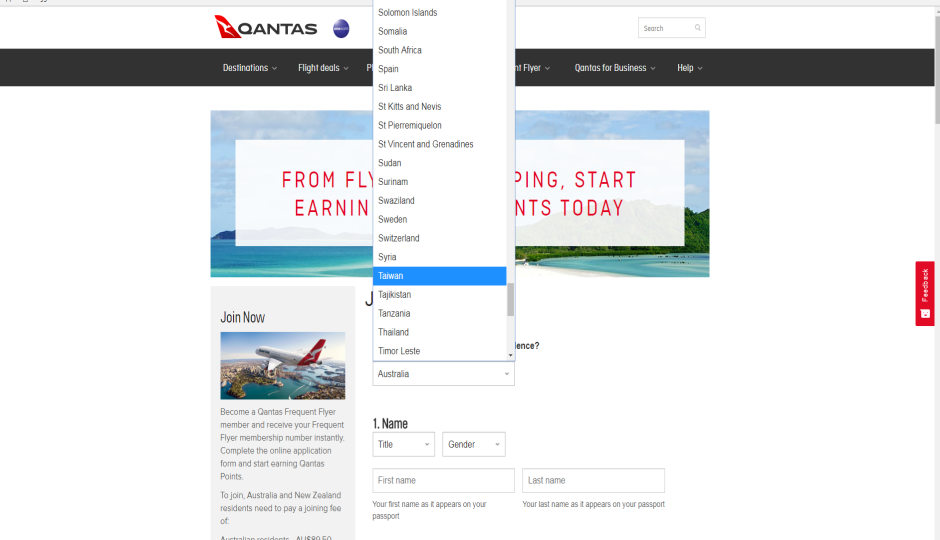 Qantas lists Taiwan as a country on their Frequent Flyer website. Photo: Supplied/ABC

Qantas has admitted an “oversight” in listing some Chinese territories, including Taiwan and Hong Kong, as countries on parts of its website, adding it would be correcting the error.

The clarification comes on the heels of a string of international companies being rebuked by Chinese authorities for incorrectly labelling Chinese-claimed territories as countries.

Late last week, Marriott International was ordered by Beijing to suspend its Chinese website and mobile app for one week in order to conduct a full review and audit, after it sent out an online customer questionnaire that listed Tibet and other regions as separate countries in a drop-down menu.

Marriott International apologised for the mistake, and is reportedly in the process of sacking an employee who liked a Twitter post by a group that supports independence for Tibet in a separate incident.

“Marriott International respects and supports the sovereignty and territorial integrity of China,” the company’s chief executive, Arne Sorenson, said in a statement.

“We recognise the severity of the situation and sincerely apologise.”

The incidents led to further crackdowns on foreign companies.

The Civil Aviation Authority of China (CAAC) has since ordered all foreign airlines operating routes to China to check their respective websites and apps.

‘We are correcting this error’, says Qantas

In efforts to unearth other infractions, Shanghai-based newspaper The Paper reported it had found 24 other foreign airlines, including Qantas, United Airlines and Air France, with websites listing Taiwan, Hong Kong or Macau as countries.

“Due to an oversight, some Chinese territories were incorrectly listed as countries on parts of our website,” a Qantas spokesperson told the ABC.

“We are correcting this error.”

Beijing considers self-ruling Taiwan to be part of its territory, and Tibet is governed as an autonomous region.

Hong Kong and Macau are both special administrative regions of China.

The mouthpiece of the ruling Communist Party, the People’s Daily newspaper, said in an editorial “the essence of the problem is the ‘political arrogance’ of foreign companies unafraid to hurt the feelings of people from other countries”.

While China is usually quick to responded to statements and actions supportive of separatist movements, many websites that have listed the Chinese regions as countries for years are only recently being rebuked.

Merriden Varrall, director of the East Asia Program at the Lowy Institute, attributed the strong reaction to Chinese President Xi Jinping’s emphasis on the rejuvenation of the Chinese nation, which was creating a sense of confidence and intolerance of being insulted.

“For some time, [there has been] this perceived injustice and narrative of persecution in China, and this idea that westerners are trying to keep China down and trying to insult China,” she said.

“They feel like now they have the strength and will to resist from their point of view what seems like being pushed around and being bullied.

“And they’ve had that sense of being bullied for a long time, but now they feel like ‘we’re coming back, we’re rejuvenating and we’re not putting up with it anymore’.”