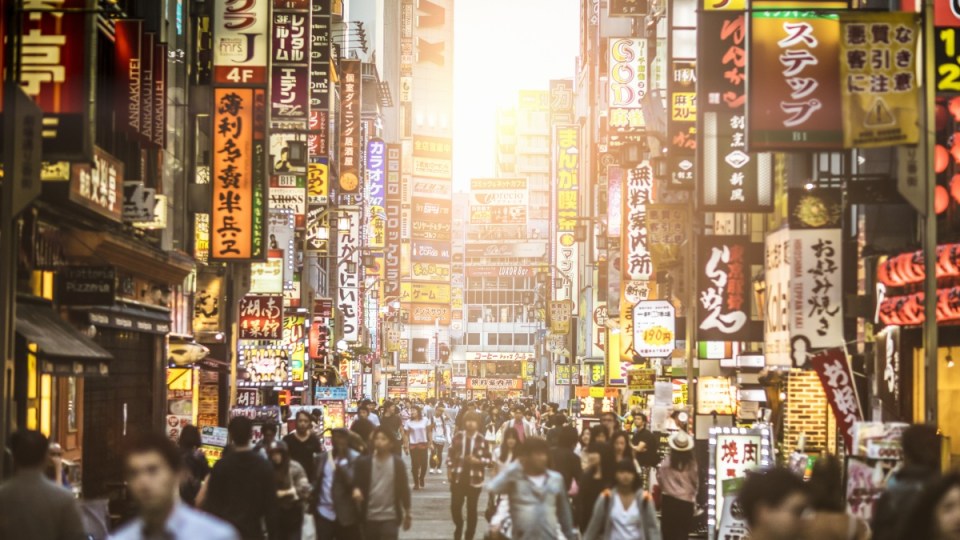 For a newcomer, Tokyo's barrage of food, sights and people can be overwhelming. Photo: Getty

Despite Tokyo being one of the trendiest destinations for Australian travellers, few visitors actually know what to expect when touching down there.

Perhaps the best thing about the captivating city – and Japan in general – is also what makes it challenging for tourists: it feels surprisingly untouched, meaning there’s little English used and it’s not entirely optimised for international visitors.

In fact, for a destination that’s only a nine-hour flight from most parts of Australia, Tokyo can be something of a culture shock for the unprepared.

I was one such unprepared visitor ahead of my maiden voyage to Tokyo in February last year.

Arriving smack-bang in the middle of cherry blossom season (which can be any time from early February to mid April), I had anticipated balmy spring weather, an ample number of English speakers and abundant and easy access to the kind of Japanese food I craved at home – fresh sushi, curries, ramen and miso soup.

I wasn’t entirely wrong, but I wasn’t right either. Straight off the flight, my travel companion and I spent half an hour attempting to figure out the train ticketing system, which is not user-friendly, especially when you’re underslept.

To our surprise, none of the airport station attendants could speak English. We managed to get onto a train with a valid ticket after an impressive mime performance involving printed-out maps of the route to our Airbnb, and guest appearances from fellow travellers.

Throughout the train ride, we sustained ourselves with perfectly crafted onigiri (rice balls) from 7-Eleven, which sells better, more affordable fresh food than many Australian restaurants.

My travel buddy is 💯

There are two main airports in Tokyo: Narita and Haneda. We flew into Narita. It is about an hour’s journey from the Tokyo CBD on the Narita Express, which connects the airport to most of the major stations. Cabbing is far more costly, but given the battle we had to get on the train, it might be advisable.

I’d recommend getting a Pasmo pass, which is similar to a myki or Opal card – you just top it up and it deducts the fare every time you enter the station. You can buy them at Haneda and Narita stations as soon as you arrive, or at a handful of other participating stations.

The entire train experience is extremely orderly. There are female-only cars, markings on the ground indicating where you should line up to board, cute little musical tones and signs to indicate which station you’re at, no pushing or shoving – and trains are never late. We even saw someone vacuuming one station.

Enjoying the subtlety of Harajuku.

The trains, particularly of the bullet variety, run like a military operation, so get everywhere at least 10 minutes early because there’s little leeway for unforeseen delays. They’ll leave without you – even if half your leg is on board!

Another tip: have cash on hand when you arrive. ATMs are not as readily available in Japan as they are in Australia and many places are cash only. On that note, Japan might be the only country where the official advice is DON’T TIP! Hurray! It’s considered rude.

Etiquette is a huge thing in Tokyo. We spent several days chowing down on delicious snacks from shopping mall food courts (which offer a wealth of incredible food options – don’t miss them) before we realised people were staring in shock. It turns out eating in public is frowned upon, as is blowing your nose (you’ll hear lots of sniffing on the trains), jaywalking, and being generally obnoxious.

But while politeness is prevalent, Japanese people know how to party. Friday and Saturday nights in Tokyo are wild, with plenty of drunken businessmen or college students stumbling out of bars. Check out Instagram account Shibuya Meltdown for visual evidence of this.

If you’re going to go drinking, it’s best to head to the Golden Gai – a few streets of tiny bars where tourists mingle with locals and the spaces are so tiny you have no choice but to get to know your fellow patrons and bartender. Another social hub, especially during cherry blossom season, is Yoyogi park, where tourists and locals alike gather to have the world’s biggest, most beautiful picnic.

These cherry blossoms are blooming so hard they're giving Orlando a run for his money.

Food wise, don’t expect to eat the same Japanese food you get at home. Often, the prevalence of certain foods is dependent on the region you’re in. There’s plenty of sashimi, ramen and udon in Tokyo – not as much katsu curry, okonomiyaki (pancakes) or takoyaki (octopus balls). For those, you’ll have to travel further afield, to places like Osaka or Kyoto.

One thing that irked me as a traveller in Tokyo who was consuming lots of food on the go – there are no bins anywhere. Prepare to carry your rubbish with you. Miraculously, there’s no litter either.

As well as being meticulously tidy, Tokyo is incredibly safe – there’s very little crime and walking around by yourself at night is no problem because it’s constantly busy. As two women travelling alone, we didn’t encounter a single situation that made us uncomfortable.

While Tokyo stays open late, it’s fairly quiet in the morning, with most places remaining closed till 11am. If you plan on visiting temples, wear socks with your shoes as it’s not advisable to enter with bare feet.

Important announcement: this is a pram full of cats. Tokyo you are so special.

As for the weather – I packed for what I thought would be crisp summer temperatures – 21 degrees or thereabouts – but found it to be surprisingly cold – closer to 12 or 13 degrees with plenty of rain. Pack a coat because, especially in spring, they’re surprisingly hard to come by in Tokyo stores.

Other things that are tricky to find include deodorant – pack antiperspirant because most places don’t sell it – and free wi-fi. Unlike lots of other international destinations, chains and hotels don’t always offer wi-fi. Instead, most Tokyo residents use something called “pocket wi-fi”, which is a cute name for what is similar to a dongle. Most Airbnbs come equipped with the portable routers, but you can also rent them online and organise to collect them from an airport or hotel.

Most importantly, keep your eyes peeled for the weird and wonderful. In my fortnight in Tokyo, I said hello to Steven Tyler walking down the street, came across a pram full of cats, ate multicoloured fairy floss bigger than my head and had experiences I will likely never replicate again. Arigatou gozaimasu, Tokyo.

China’s No.2 surprises Anthony Albanese with congratulations before PM’s first big test
Queen all smiles in flower show buggy
No evidence monkeypox has mutated, WHO says
Russian diplomat resigns over Ukraine war
Naomi Osaka ‘not sure I play Wimbledon’ after French Open loss
UAE star Omar Abdulrahman returns for must-win Socceroos clash
Australian passports are the ‘most expensive’ in the world
Today's Stories

A first-time visitor’s guide to Tokyo