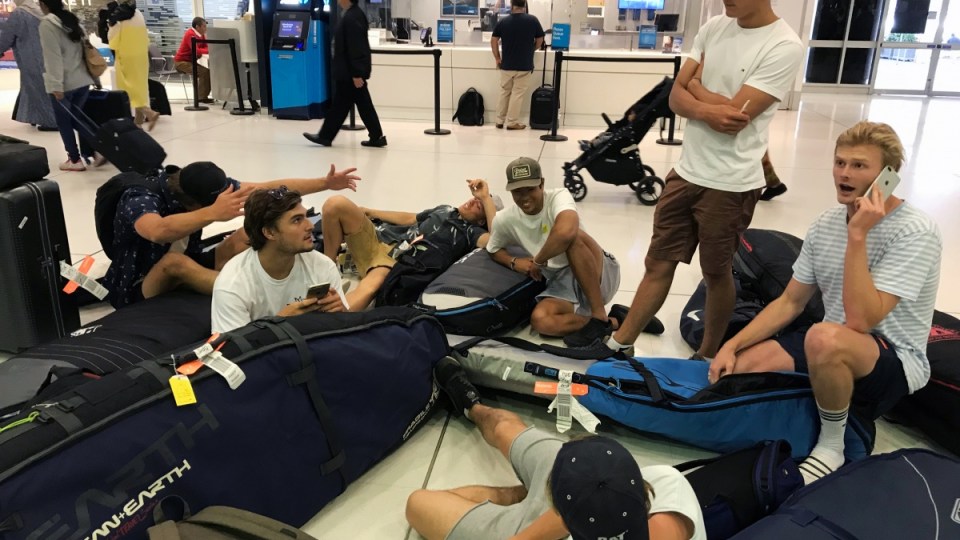 A group of surfers from Sydney wait for updates on their cancelled flight to Sumatra at Sydney Airport. Photo: AAP

Some young Australian travellers stranded in Bali in recent days have claimed insurance companies have ripped them off, but they may have left booking their trip too late to make a claim based on the volcano disruption.

According to insurance experts, those who purchased insurance well in advance would most likely be covered, but anyone who booked after September 22 – when the Indonesian government warned an eruption was imminent – was unlikely to be covered by travel insurance.

Airlines cancelled inbound and outbound flights earlier this week due to the danger posed by the ash cloud after Bali’s Mount Agung volcano erupted for the first time in more than half a century.

About 120,000 travellers have been stranded in Bali since Sunday, including an estimated 6000 young Australians on the Indonesian island for schoolies after their final exams.

Emily Martin, 19, who is on her first overseas trip without her family, said she felt “left in the dark” by insurance companies.

“They don’t really tell you that you’re not covered by the insurance for the volcano,” she said on Tuesday.

Her friend Dannielle Hicks, also 19, was reduced to tears when she realised she would run out of money in a foreign country.

Perth resident Aniwa Graham-Siliva and her husband also found themselves stranded in Bali, after arriving last week with the intention of flying out last Monday.

“There are easily more than 150 people here,” she told The New Daily on Thursday as she waited in the queue at the Ngurah Rai International Airport for a rescue flight out of Bali.

“The magnitude of the volcano erupting on a much larger scale frightens us … it’s the first time being stranded for us, but many friends have been stranded before.

“We have booked accommodation a day at a time at the same hotel.

“We booked our flights about three months ago. I haven’t even tried to claim insurance yet, just waiting until I return home.”

Insurance claims consultant Dr Allan Manning said he would be surprised if Ms Graham-Siliva was not able to claim her additional accommodation costs on insurance.

United States resident Ryan James, from Dallas, Texas, said he and his husband were not aware of any volcano danger when booking their flights.

“We did not have travel insurance. But it didn’t make a difference since the airport was closed. We just had to get the heck out of Bali,” he told The New Daily from Hong Kong.

“After seeing that the flights were going to be a mess, we decided to take the trip by car, bus, boat and train to Surabaya, Indonesia to try and get a flight to Hong Kong.”

Mr James said their 16-hour journey across Indonesia had been “very scary” to reach the next airport.

“We were completely clueless about the volcano before arriving,” he said.

“Never in a million years would I have imagined that a volcano would ruin our trip to Bali like this.

“Who researches volcanos before going on vacation? We clearly didn’t.”

Dr Manning said that when the volcano started creating difficulties, it became a likely risk and many travel insurers introduced an embargo on new policies that excluded claims relating to volcanic activity.

“A lot of the time people take the attitude that it’s never going to happen to them, but it’s really important that you take the time to read your insurance policy and make sure you understand it,” Dr Manning said.

“I use the motto ‘hope for the best but plan and insure for the worst’. I think anyone who doesn’t get travel insurance is mad.

“There are so many heartbreak stories. It’s just not worth it.”

However most companies would cover for natural disasters, providing it is unexpected.

Bali volcano eruption: Stranded tourists may have no insurance claim