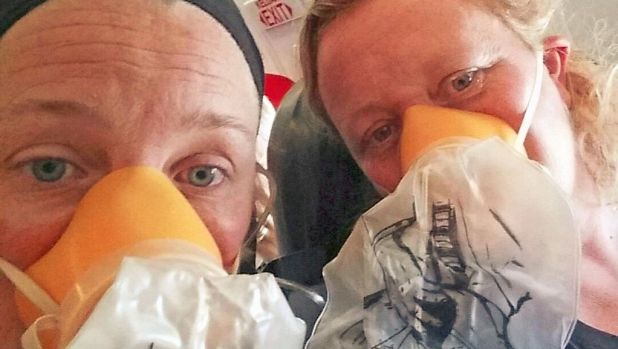 Passengers on an Indonesia AirAsia flight from Perth to Bali on Sunday feared for their lives when the cabin lost pressure. Photo: Channel Seven

Aviation experts have warned that saving a buck isn’t worth your life, after a frightening mid-air incident on budget carrier AirAsia on Sunday.

AirAsia Indonesia’s QZ535 from Perth to Bali reportedly plummeted 20,000 feet when a technical issue caused the cabin to lose pressure just 25 minutes into the flight, which came after a series of near-misses in recent months.

Passengers claimed flight crew added to the chaos by screaming and appearing to panic in the aisles.

“Before you spend and make your booking, have a look at the safety rating of your carrier … for a difference of maybe $200. What’s your life worth?” Mr Hansford said.

AirAsia Indonesia received a safety rating of two stars out of seven, while its sister airline AirAsia X was awarded seven out of seven in the latest Airline Ratings. AirAsia and AirAsia X were also awarded by Skytrax for being the best low-cost airline.

Greg Bamber, co-author of Up in the Air and an aviation specialist at Monash University’s Business School, said he believed AirAsia was a lax employer.

He told The New Daily pilots and crew were banned from joining their union and were not adequately trained.

“My take is that AirAsia is not a great employer of people, and it does not invest in as much training and development of its staff as good employers do,” Professor Bamber said.

“Without union representation, the staff are to some extent cowed and reluctant to speak out about issues they see.

“Engineering issues occur from time to time, but this is why you want the staff to be well trained to identify them, to stop them, and to get them fixed – and to respond in the right kind of way when they manifest themselves.”

Professor Bamber said the aircrafts and engines were made by the same manufacturers.

“But the planes need to be well maintained and flown and crewed by staff who are well trained and will speak out,” he said.

Professor Bamber said AirAsia subsidiaries were attractive to travellers because the airline is a “ruthless cost-cutter”.

“People often seem to think about air travel through their hip pocket, or through their purse … But how much is your life worth? Is it worth $100?”

The incident on Sunday came after a slew of dramatic AirAsia Group incidents.

In June, an AirAsia X pilot told passengers to “say a prayer” when an engine issue forced an A330 aircraft to return to Perth.

An AirAsia X flight from the Gold Coast to Malaysia was forced to land in Brisbane in July after a bird hit its engine.

In December 2014, an AirAsia Indonesia flight carrying 162 people crashed into the Java Sea. All 155 passengers and seven crew were killed on the flight from Indonesia to Singapore.

“It’s about time somebody at CASA got some big cahoonas and actually said, ‘until you resolve your maintenance issues, your flights to Australia are suspended’.

“But CASA are more worried about the external relationships with Indonesia than fixing the problem. They don’t want a diplomatic incident … despite the fact that the safety of Australians is being jeopardised.”

He alleged AirAsia Indonesia was not required to meet Australian standards, a claim which CASA denied.

“CASA closely monitors the safety performance of all foreign carriers operating to Australia,” a spokesperson told The New Daily.

AirAsia Indonesia apologised for the Sunday incident and said passenger and crew safety was its priority.

The airline did not respond to further questions.

‘Is your life worth $100?’: Aviation experts warn against flying cost-cutter AirAsia