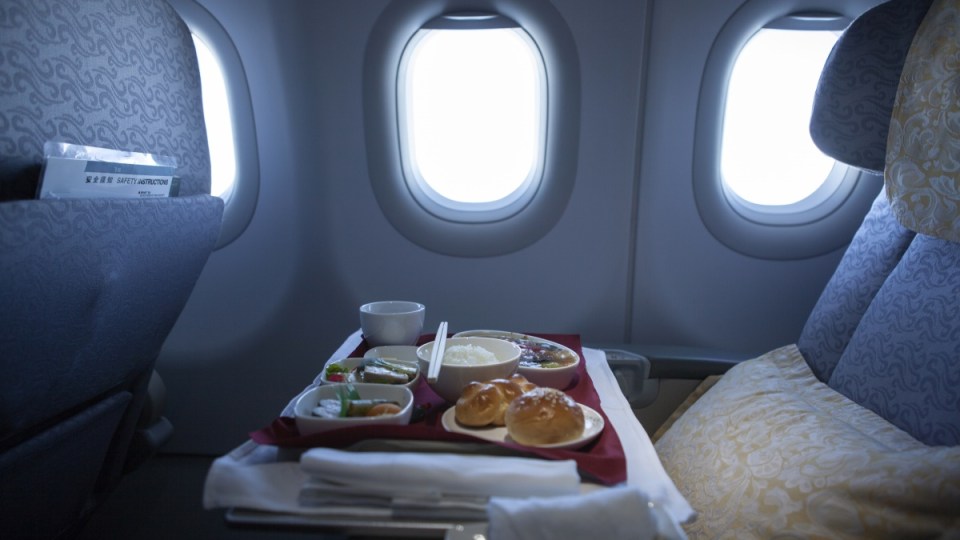 It seems impossible to enjoy a good meal when you're on a flight. Photo: Getty

Tasteless and shrouded in mystery, airline meals are the butt of jokes and the element of travel we all love to hate.

But what are the facts behind the most maligned food on the planet?

What’s with the bland taste?

Blame it on altitude. Dining at 30,000 to 40,000 feet (the average cruise altitude of commercial planes), impairs our taste and smell receptors. Reduced air pressure and humidity within the cabin is responsible for the effect.

“Food and beverages are perceived as if they were sniffed,” explains Fraunhofer Institute aroma-chemist, Dr. Andrea Burdack-Freitag.

Cornell University researchers also found airplane noise affects our palate, making us crave unami, a fifth taste described as savoury by the Japanese, and attributed to glutamate, an amino acid rich in tomatoes and other foods.

It’s why so many reach for the tomato juice inflight.

How fresh is it?

Your hot meal has a maximum shelf life of 72 hours (from cooking to departure time) thanks to world food safety guidelines set by the International Flight Services Association.

Cold food, like a fruit salad, must be consumed within around 48 hours of preparation or thawing.

In reality, hot food is only partially cooked and not long before takeoff, then chill-blasted, with the final phase happening onboard.

Where does airline food come from?

Most of the 55 million airline meals made globally each year are mass-produced by three companies (LSG Skychefs, Gate Gourmet and DHL).

That’s a revelation from a 2015 industry report by food safety specialist, Erica Sheward.

Our biggest beef with airline food

Forty per cent of passengers on a domestic or overseas flight complained they were still hungry after their meal.

Thirty-eight per cent of passengers choosing a vegetarian or vegan meal, rated it “Yuck” or “Super Yuck.” Those left unimpressed felt airlines were confused about the difference between vegetarian and vegan.

Children’s meals were another major cause of dissatisfaction, considered inappropriate for age and lacking in options.

Nik Loukas, Melbourne-born reviewer of airline food and founder of InflightFeed, has flown 503,000 miles and consumed 284 in-flight meals in the process.

He’s also glowing about the business class meals on Air Europa: “It’s like eating from a farmers market, so fresh, and unique,” while SAS business class “is like dining in a cool Scandinavian restaurant”.

According to Mr Loukas’ blog, those needing to lift their game include Ukraine International Airlines, Air India and Sri Lankan Airlines.

Nonetheless, he appreciates the difficulties in delivering food in the sky and is currently filming a documentary exploring the behind the scenes of how the industry meets this challenge.

“They have to think about so many different issues in order to serve us a meal inflight.”

The meal-high club: Why airline food tastes so bad