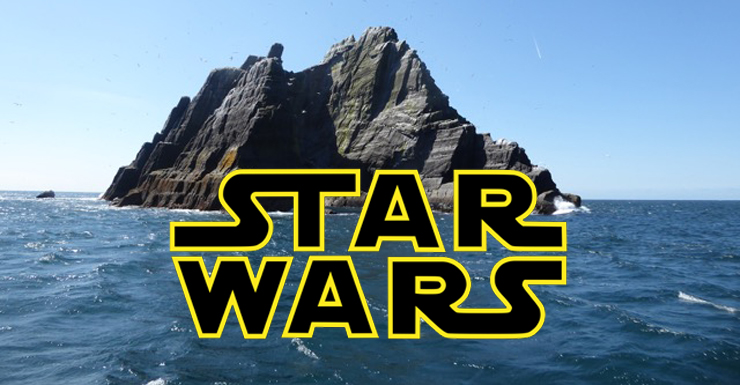 Something strange is going on in Ballyferriter.

The small Irish-speaking village on the Dingle Peninsula, a stop along the Wild Atlantic Way tourism trail, has been keeping a multi-million dollar secret, albeit poorly.

Across the fields of grazing cows, high on the cliffs about 2km west of the village on Slea Head Drive, two cranes loom like giant insects over a cluster of beehive-looking structures. A special road has been laid to this mysterious stone hive.

• How to spend the perfect Sunday in Paris
• Gap year or no? Successful Aussies decide
• The adventure every traveller should have

Inquire in one of the village pubs what’s going on, and the locals switch from Irish to English and whisper in that lilting accent: “Oh that’s a secret now.”

There’s a glance to the left and the right in search of eavesdroppers, a slight lean forward, then a breathless rush of words: “Well now, I shouldn’t be telling you but it’s Star Wars. They’re going to be filming some of the next one up there and they’re building a new road to get to the set and there’s security to keep people out and they’re making these beehive structures and it’s all right on the cliff edge but you won’t be let through now because they’ve got security.”

The last Star Wars movie raked in more than $US2 billion, so Ballyferriter is already welcoming a reawakening of the Force up the road. Who knows, there may even be a permanent theme park after the film crews leave.

It is the second time the Wild Atlantic Way has starred in the film franchise. About 30 kilometres away from Ballyferriter, and nearly 12 kilometres out to sea in the Atlantic Ocean, is the island rock of Great Skellig, the location of the important final scene in Episode VII: The Force Awakens.

Atop this 300-metre high rock is one of Ireland’s most astonishing examples of perseverance and commitment — a hand-hewn monastery.

The stars of the Great Skellig scene, Mark Hamill and Daisy Ridley, were carried over the heaving seas by helicopter, and the unlucky crew by boat. That showbiz experience was a great deal more comfortable than 1500 years ago, when a handful of monks decided the island would be the perfect place to commune with God.

The monks built a flimsy currach — an Irish dinghy made of hazel branches and animal skins — and rowed it across the dangerous mass of cold currents, wearing nothing but draughty woollen smocks. With the rough tools of the time, they hacked into the black rock an astonishing stairway of 618 steps up to the island’s summit, then carved by hand the blocks for their monastery, all while battling vicious storms, scarce food and Viking raids.

A boat trip out to the island, where you can scale the stairs, will leave you literally breathless at their achievement — and will have you treading the same rocky steps as Luke Skywalker (Mark Hamill).

On the way you will pass the smaller Skellig island, host to another marvel — one of the largest gannet colonies on Earth, numbering about 30,000.

But by no means is Star Wars the only attraction of The Wild Atlantic Way. Driving the trail is epic experience, where you will witness the raw beauty of Connemara, The Burren, the Ring of Kerry, the soaring Cliffs of Moher and Slieve League, the spectacular Giant’s Causeway, and the Wicklow Mountains.

You’ll also learn more of the potato famine that halved the island’s population between 1845 and 1852.

Many famine-era cottages still exist. Some are ruins, some museums and others renovated as tourist accommodation. They are there on the view-drenched Green Roads built during the great hunger, when the starving earned a pittance by hefting rocks from the paddocks and piling them into useless walls to line the muddy tracks.

It was a time when little mercy was shown by their English overlords, who exported what food was left for their own domestic needs.

One of the most notorious episodes was the Derryveagh evictions when tycoon “Black” Jack Adair brutally threw out 244 impoverished men, women and children in the dead of night and destroyed their cottages on his land around Glenveagh Castle in County Donegal after one of his Scottish shepherds was murdered.

The Donegal Relief Fund of Australia came to the rescue of most of Adair’s victims, subsidising their passage to New South Wales, where their descendants spread.

Another stop on the Way is Titanic Belfast, an exhibition devoted to the great liner’s doomed maiden voyage, which claimed the lives of 1517 people, including one Australian, 32-year-old Arthur Gordon McRae from Adelaide.

The original Titanic cost $US7.5 million to build in 1912 (about $US166 million in today’s terms) and required 3000 men to build at the Harland and Wolff dockyard, now home to the exhibition.

Three million red-hot rivets were individually hammered into the hull. When you watch how it was done, you realise that health and safety wasn’t big on the agenda in 1912. One man would hold a mallet against one side of a steel plate to resist the blows while two men on the other side took alternate swings with mallets at the hot rivet. The noise and heat would have been excruciating. Eight men died building the ship.

No wonder that after a hard day’s work, the men would have flocked for a cooling pint of the dark stuff.

The Force can be with you in different ways in this magical country.

Secret of Ballyferriter: it’s out of this world