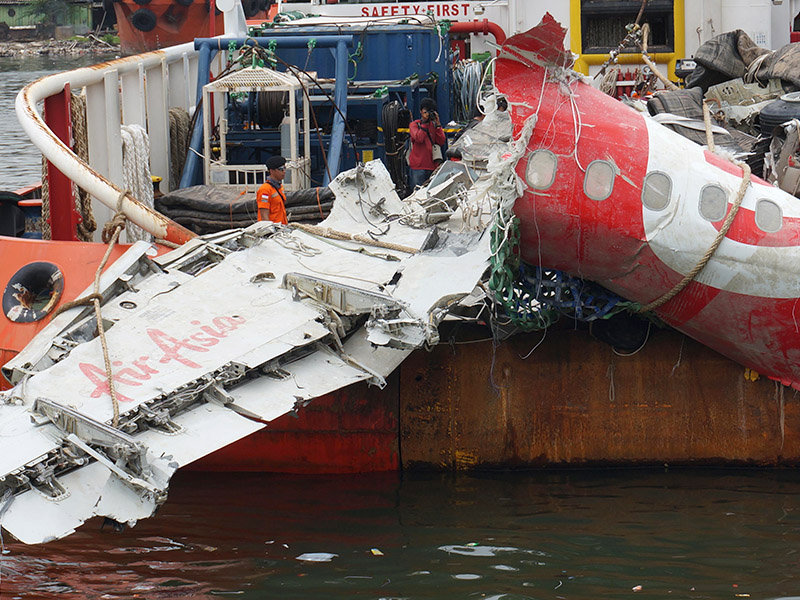 An Indonesia AirAsia plane that crashed into the Java Sea in 2014 killing all on board had carried thousands of Australian passengers while flying with a mechanical fault for the 12 months before the tragedy.

Aviation experts were asked by the ABC’s Foreign Correspondent to track the plane 12 months before the crash while it had the mechanical fault. The details of the aircraft’s flight path over that period have been uncovered with disturbing questions raised about the role of Indonesia’s aviation regulator, including allegations of corruption.

There are now calls for the Indonesian arms of AirAsia to be suspended from flying to Australia until they pass an international safety audit.

All 162 passengers and crew died when the Airbus 320 stalled at high altitude during a flight from Indonesia’s second-largest city Surabaya to Singapore on December 28, 2014.

The final report into the crash, released in December last year, found the aircraft had a fault with its rudder limiter which went unfixed for 12 months before the crash.

Foreign Correspondent has revealed thousands of Australians had flown on the same aircraft while it had the fault.

Perth-based aviation expert Geoffrey Thomas said airlines like Qantas would never a fly a plane with that sort of defect.

“I believe there’s evidence around that some airlines that fly to Australia don’t meet international standards and they should be banned,” he said.

“It’s simply not good enough that you’ve got aeroplanes flying around with potentially catastrophic faults with them.”

The crash investigation report says the rudder limiter defect did not in itself cause the crash, but instead the flight crew’s reaction to a warning alarm about the fault was to blame.

Further, Indonesia AirAsia was not even approved to fly the route to Singapore on that day.

Directly after the crash, the Australian Transport Workers Union called for all Indonesian AirAsia flights to be suspended.

CASA’s spokesman Peter Gibson said it would not be appropriate to give a running commentary on individual airlines.

“But rest assured if any airline has issues remaining that need to be watched carefully then we continue to watch,” he said.

CASA confirmed the so called “ramp checks” on Indonesian planes are continuing.

There are also allegations that staff of the Indonesian equivalent of CASA, known as the DGCA (Director General of Civil Aviation), have engaged in corrupt activities.

Among the claims is that one Indonesian pilot who failed a flight simulator test in Australia because he was deemed to be too “uncoordinated” to fly went on to receive his flying licence in Indonesia after a bribe was paid to an inspector.

That allegation was raised with both the Indonesian and Australian Transport Ministries at the time.

Mike, a whistleblower pilot and senior captain with 28,000 hours flying experience, also raised concerns about pilots’ qualifications during the program.

“We had an Indonesian co-pilot who we failed outright, he’d been with us a number of years, but we failed him outright and he came back and he joined one of the local airlines,” Mike told Foreign Correspondent.

All Indonesian-operated airlines are banned from flying into the United States, while Europe has also black listed most carriers with some exceptions.

Indonesia’s national carrier Garuda can fly to Europe but not the US.

“We have made our own assessments of the airline, of the Indonesian safety system and we believe that they are meeting the required international operational standards,” Mr Gibson said.

“If other parts of the world don’t do that then of course that’s a matter for them.”

The DGCA and AirAsia declined to be interviewed by Foreign Correspondent.

AirAsia says it has improved pilot training and maintenance standards since the crash and their full response can be found on Foreign Correspondent‘s Facebook page.

‘These airlines should be banned in Australia’