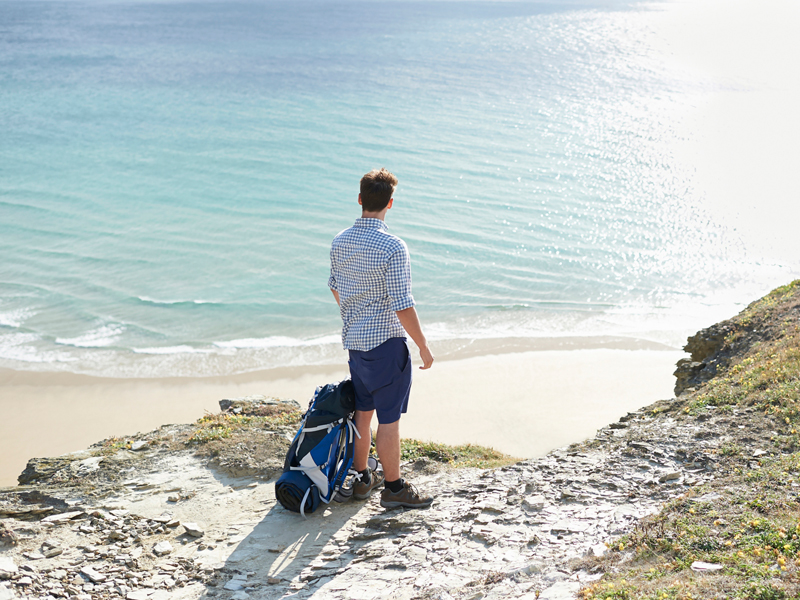 It’s a month into my four-month backpacking adventure across Europe and I’m as sick as a dog.

Countless stops at Italian pharmacies are a massive struggle as the staff barely speak a word of English.

I’m frustrated and annoyed, but I press on. Setbacks are inevitable when you’re exploring 26 European countries.

• Why now is the perfect time to fly to the USA
• Why do we still need to carry passports?
• Stop kicking my chair! Flying etiquette explained

From the United Kingdom to Greece, Spain to Turkey to Iceland, and even a detour to nearby Morocco and Egypt in Africa, I saw as much of this breathtaking part of the world as possible, despite being sick most of the time.

I experienced the thrills of skydiving over the Swiss Alps, getting lost on a quad bike in Mykonos, trying to understand the accents of Liverpudlians at a football match, lugging around a broken suitcase and plenty of all-nighters.

If you follow me to Europe, I can guarantee the demands of backpacking will get to you. You’ll want to bring cold and flu tablets, vitamin C and stay hydrated and eat healthy.

But it’s an exhilarating adventure you should definitely try, so long as you prepare thoroughly. Here’s everything else you’ll need to know before jetting off.

I always booked flights/trains/buses for early in the morning.

I’m talking alarms set for 3:30am for a 7am flight to Iceland. It’s better for early starts as I still had a full day in Iceland that day.

You will get tired but it is worth it as you can sleep when you finish travelling.

Take a backpack, not a suitcase

Ah the cobblestones, how they ruin the wheels of a suitcase.

For three of the four months in Europe, the wheels on my suitcase were broken due to rough surfaces. They just wear and tear.

A Hybrid or Terrain backpack is a must for any big adventure.

Don’t go over the top with clothing. Most hostels have cheap laundry facilities that make it easy to clean.

Do bring a shower towel (most hostels don’t supply or charge for use) and also prepare for Europe’s varying climate.

You never know what surprise is going to smack you in the face. Whether it is that unexpected hospital visit or simply forgetting an important accessory, prepare for it.

I didn’t set a daily budget, but I always checked my daily spending.

Keep spare change for the loo

For Australians, paying to use a toilet seems ludicrous.

But in Europe, they think it’s ludicrous we don’t!

It’s a small cost (usually under one euro) so make sure you have spare change on you, otherwise you could be caught out in a desperate situation.

Not all of Europe accepts the euro as currency.

Most of the eastern European countries have their own form of legal tender, whether it be the koruna or krona, lek or lira, dram or denar. So converting euro to the local money can come at a cost.

Convert less than what you think, as most countries throughout Europe may not exchange that currency.

Don’t get lost in translation

Trust me: you need to give the local language a go.

The people of the country you are travelling to will give you more respect if you greet them in their language and at least attempt a sentence.

Some cities, especially Paris, will ignore you if you don’t give French a go.

Not every hostel is what the brochure claims it to be.

Read the comments on Hostel World to see what people say. My keys to a good hostel are: close to transportation, free breakfast and hostel activities.

But don’t let a bad hostel ruin a city…

There are going to be massive lines during peak periods at Europe’s biggest sites.

Take the stairs when going up the Eiffel Tower and go to sites early in the morning.

Don’t try and cram in all the major sites in one day. You may just want to spend more time at one.

There is so much to see in Europe.

Some cities like Dublin and Belfast you can do over two days, but for other cities like London, Budapest, Paris and Prague you will definitely need more time.

Research your cities thoroughly and don’t cram it all in.

When you’re rushing from place to place, sometimes you forget to take it all in.

When you are walking through the Colosseum in Rome, stop, look around and think about where you are.

It might seem simple, but when you are travelling you do forget to embrace what you are doing and the importance of where you are.

Backpacking Europe: we give you a basic guide