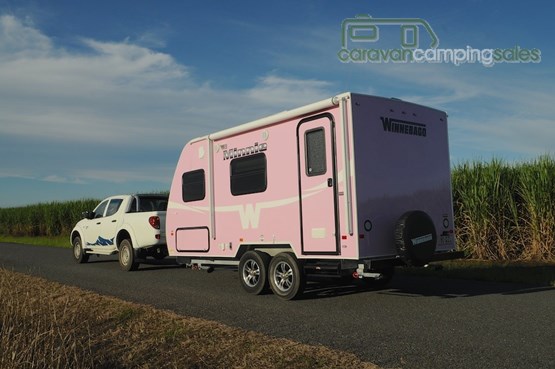 You’re certainly not going to miss them on Aussie roads.

Along with a stylish grey gel coat fibreglass exterior colour, the four-model ‘Minnie’ range stretching in size from 15 feet to 23 feet, can also be ordered in eye-catching yellow, green, red, orange and pink body colours.

Pink? Well it’s certainly a colour for the brave, but there’s another reason, as Apollo Motorhomes is supporting the National Breast Cancer Foundation with that van, donating $500 from the sale of every unit.

• Most incredible scenic drives in the world
• Australia’s best beach camping spots
• The most beautiful, isolated towns on earth

As one of the first batch of 50 – mostly grey – to land here, our ‘Minnie’, like its brothers, incorporated a number of changes to make it less ‘American’, including a new, lighter interior finish and more modern fixtures such as flick mixer taps.

Packing a lot of wanted features into a small footprint, Apollo calls this Minnie a ‘studio’ van and sees it ideal for adventurous couples looking for a compact, easy-to-tow caravan without sacrificing on features.

A large bed, full kitchen, dinette and a corner bathroom tick off these boxes.

But the 1806AUS also comes with a number of items that you only find on the option list of most Australian caravans in the $40,000-$50,000 bracket, such as a power-operated awning, four-speaker JVC sound system, TV, a roof-top mounted reverse cycle air conditioner, four gas burner cooktop, grill and oven, microwave and a decent-sized 186-litre fridge freezer.

Al-Ko ESC stability control is optional, as is a rooftop panel for the pre-wired solar.

About all that’s missing from the standard Aussie coterie is a body-mounted picnic table and a stubby holder in the cutlery drawer!

Perhaps the most appealing thing about this Minnie Winnie, however, is its ease of towing.

With its short length and 2150mm (7ft 1in) width and maximum laden weight of less than two tonnes, the 1806AUS can be hauled effortlessly by most compact SUVs and barely needs towing mirrors because of its slim hips.

On the downside, the standard Al-Ko rubber suspension – as with most British and European vans – can make the Minnie a little ‘bouncy’ on uneven road surfaces when lightly laden.

While certainly given an Aussie ‘twang’ by Apollo, there’s no taking the American completely out of a US-built caravan, with some of its hardware a little unfamiliar and ‘clunky’ compared with locally built caravans.

The bi-fold step, for example, is solid and works well, but you can’t wind the left rear body leg down unless it’s folded.

Then there’s the sliding Perspex screen in the secondary flywire entry door that needs to be opened before you can access the latch.

We also found the concertina block-out and flyscreen blinds inside a bit stiff and not particularly user-friendly, while the wind-out windows themselves are things we don’t see these days on Aussie vans.

However, these are relatively small issues that may not trouble owners once they become familiar with their ‘Minnie’.

This isn’t a caravan for a long road trip, but rather one to take on shorter holidays and to live in and enjoy, regardless of the weather.

But they will be battling to find a more truly compact caravan for the money and if they can live with the gloomy décor and adjust to the American hardware, we think they will be tickled pink with this Minnie Winnie.

The Minnie Winnie is a great new addition to the Australian caravan scene that goes a long way to accommodate Australian tastes.

While there are much larger, slide-out models available with up to six berths and $70,000-plus price tags, the smallest and cheapest 1806AUS, combines the sturdiness of Australian and US design with the size and weight to match many of the Europeans.

And you can really make a statement if you’re game enough to tick the ‘colour’ box!