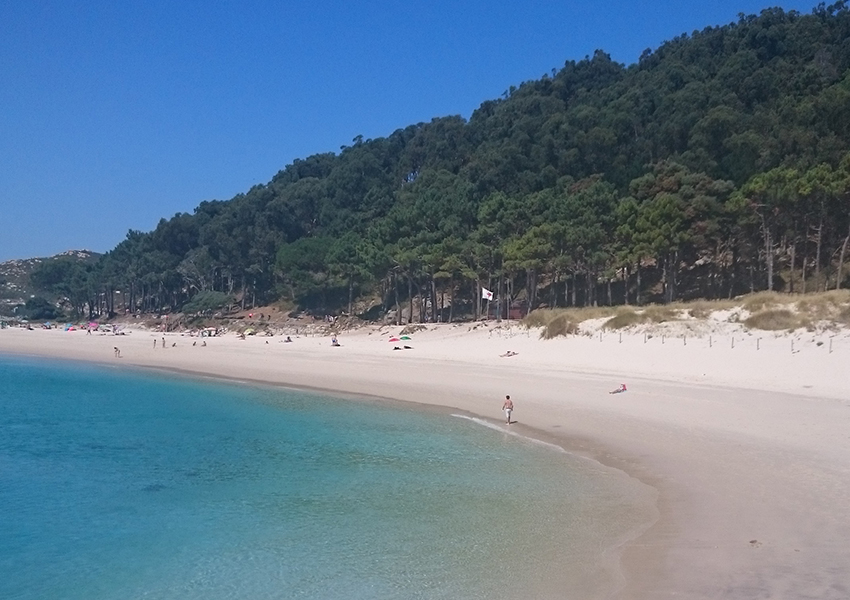 This summer has been record-breaking for Spain.

For the first time ever, 29.2 million tourists flocked to the country in June 2015 to take advantage of its pristine beaches and tapas bars – that’s 4.2 per cent more than June 2014.

Unsurprisingly, Spain regularly tops the rankings for world’s best beaches, but wading through the nearly 5000km of coastline to find gems that haven’t been completely overrun with tourists can be tricky.

While many people flock to Barcelona, Madrid and Seville and find whatever beautiful beaches they can between these three major cities, there are a number of stunning stretches of white sand and azure water on the other side of the country.

Ilas Cíes is a group of three islands off the west coast of Spain, not too far from the Portuguese border in the provence of Galicia.

Located about one hour by ferry from Vigo, the islands have a number of pristine beaches as well as a nature reserve for those that enjoy hiking.

The islands are protected under national park status and the number of tourists allowed on the islands is capped each day to prevent destruction to the environment.

This means that the chance of you having to fight someone for a spot on the perfectly fine, white sand is slim and there won’t be any jet skis or party boats disrupting your peace.

While you can camp on the island, we recommend staying at one of the many hotels located near Vigo’s port where the ferry leaves for the islands several times each day.

Located in the central-north coast, Santander is steeped in history with the famous Magdalena Palace once serving as the Spanish royal family’s holiday house.

While reasonably crowded during the summer months when many locals are enjoying a break, Santander has more than enough beaches for everyone to find a spot.

And after a long day of swimming, there are worse ways to unwind than at one of the many tapas bars or pintxos in the town.

When you think of ‘off the beaten trail’, San Sebastián probably isn’t the first place that comes to mind – but its popularity is well-deserved.

Located near the French border, the beaches are surrounded by a number of beautiful old buildings and churches, as well as some of Spain’s best bars, clubs and restaurants.

Both of San Sebastián’s beaches are easily accessible and have sun lounges for rent if you’d like a little more luxury that lying on your towel. La Concha in the west is the larger of the two beaches, its bay protection means the water is safer for beach-goers looking for a calmer experience. La Zurriola in the east is outside the bay and is popular among surfers and bodyboarders.

You can’t talk about San Sebastián without mentioning the gastronomy. With seven 3-Michelin star restaurants in the town, fine cuisine seems to be contagious, and the good news is that you don’t need to visit a Michelin restaurant and empty your bank account to have an exquisite meal.

Getting there: RENFE train from all over Spain, Portugal and France. Fly to Biarritz (France) or Hondarribia (San Sebastián).
Eat: La Madame (three courses for €40-€50 per person, including wine)
Sleep: Hotel de Londres y de Inglaterra (from €128 per night)

The top three beaches in Spain