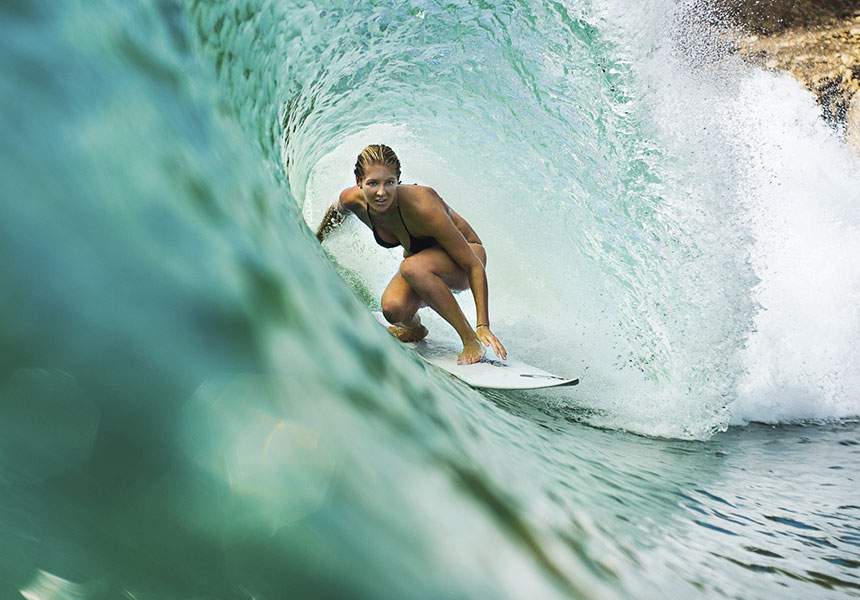 Stephanie Gilmore is in a familiar pose, with her fist in the air and triumphant after another perfect ride. She got the job done, this time clinching her sixth world surfing title during the season’s final event in Hawaii.

But she’s never celebrating for long.

Soon she’ll be heading for the airport for another flight, to another country, another culture, and another surfing event.

Recently, the 26-year-old from Rainbow Bay on the Gold Coast was in an Alaskan fishing village called Homer for a surf wear company photo shoot. From there, it was to California for a women’s pro event, then more competitions in Europe, and finally Hawaii.

Gilmore is not only the master of cutbacks and carves, but also an expert on travel.

Her frequent-flyer points (undisclosed) may be in the millions as she jets around the world following the ASP World Surfing Tour.

“We compete everywhere from the Gold Coast to Hawaii, California, Rio de Janeiro, France and Portugal,” she says. “Then, in between I get to places like New York, London, Paris, Japan and Alaska for photo shoots.

“And when I’m really lucky we chase swells in the Mentawais (Indonesia), Fiji and Mexico. It’s a really lucky lifestyle but travelling this often isn’t always as glamorous as it may seem.”

Homesickness can bite at any time, but Gilmore says her strategy is to be in “the moment”.

“Help your friends and family at home understand that staying in touch is sometimes difficult,” she says. “It’s important to be present for the people you’re around in the place you are, rather than texting elsewhere.”

She goes to Rio

Gilmore says her favourite hotel is The Fasano in Rio de Janeiro, located in the heart of Ipanema Beach that was made famous by the 1960’s Brazilian hit song, The Girl From Ipanema.

“The rooftop infinity pool and lounge looks over the beach and at sunset it’s the place to be,” Gilmore says.

Depending which room you select, some of the features of this trendy boutique hotel on one of the sexiest strips of beach in the world include marble bathrooms, Espresso machines, leather-upholstered day-beds, balconies with Sergio Rodrigues wooden chairs, and even a bathtub with ocean views.

The hotel also has a private strip on the beach where guests can relax.

Then, for Gilmore’s favourite restaurant, it’s across to the Bahamas to The Landing, at Harbour Island which is known for its pink-sand beaches and turquoise water.

“An Australian guy (Toby Tyler) actually owns this boutique hotel and restaurant. It’s similar to a beautiful old Queenslander house with a fabulous balcony to dine on,” Gilmore says.

The menu of crab stack, pan roast lobster and Afro Head Tiramisu has Conde Nast Traveller sharing Gilmore’s enthusiasm, with the magazine listing it on its hot list and simply writing “dazzling food”.

The stylish interiors of the plantation-style guesthouse have been done by former Ralph Lauren model India Hicks and her interior-designer partner David Flint Wood. Think of antique four-poster beds, colonial furniture, hardwood timber floors and white walls and you get the picture.

For surfing, Gilmore is a rap for Mexican waves.

“Mexico is always a lot of fun, and cheap once you’re there,” she says. “Boat trips in Indonesia with a bunch of friends can also be one of those ‘must do’ lifetime experiences.”

In Australian, she likes the Western Australian coastline. “It is beautiful and has great surf, but also the Sunshine Coast and Byron Bay.

“I live close to Snapper Rocks and Rainbow Bay. I surf there as much as possible. It’s a world-class wave and when a swell hits it’s magical.”

Gilmore travels with five surfboards and is constantly hit with excess baggage charges.

“The excess charges are a little ridiculous and change with each airline,” she says. “The thing that always baffles me is that golf bags and snowboards travel for free, but surfboards are charged.”

Apart from the boards, she travels light and says she has her packing under control.

“I’ve learnt that less is more when it comes to packing. You can always buy what you need wherever you are, and if you can’t you don’t really need it. I have learnt the principle of quality over quantity. And sticking to one color scheme helps. “

When she’s home, Gilmore opts for the simple life.

“I love cooking with a bunch of friends at my house. We start early, share some wine, good music and conversation in the kitchen and always finish with dessert!”

Gilmore was back in Australia recently for the release of a movie about her called Stephanie in the Water.

It’s filmed by Ava Warbrick, daughter of Rip Curl founder Doug Warbrick, and follows Gilmore around for three years, chronicling her highs and lows from being attacked by a man with a crowbar, to the day-to-day pressures of being a surfing superstar.

Mr and Mrs Smith has double rooms at Fasano Rio de Janeiro on famous Ipanema Beach from about $400 a night, including a 15-minute welcome massage, personal trainer and use of the rooftop pool.

The Landing, Harbour Bay, Bahamas, is a 12-room boutique hotel and restaurant in a plantation style property built in 1800. Mains about $45, harbourislandlanding.com.

Stephanie in the Water is available on DVD and in digital.