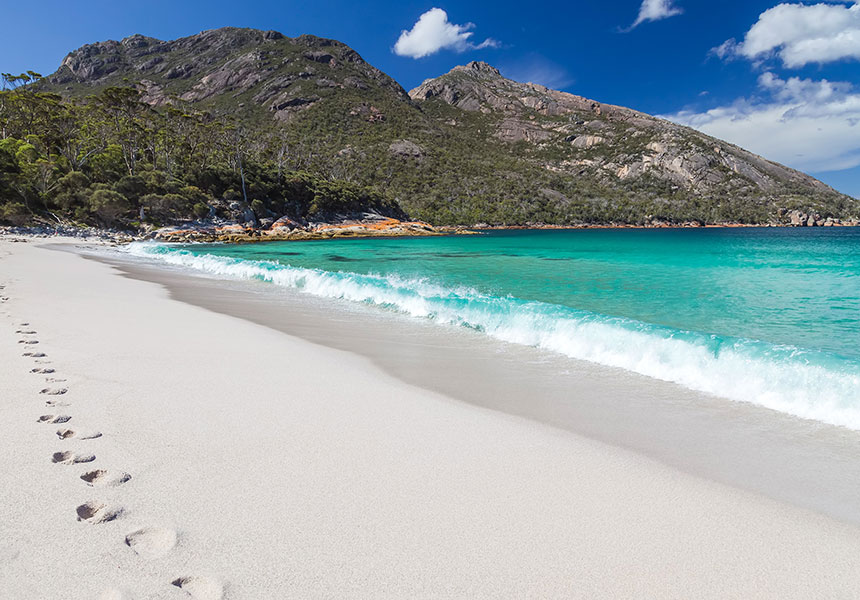 Comparing areas from around the globe, the renowned travel guide’s Best in Travel 2015 gives Tassie fourth place in its top-10 regions category.

“Modern Tasmania has adopted a fresh, hip and inclusive attitude sparked by the brilliant revival of its now super-cool waterfront capital, Hobart, and the development of an eclectic year-long events calendar,” Lonely Planet’s Chris Zeiher writes.

An extension of the Three Capes Track in the state’s southeast – due for completion in the new year and offering walkers a “stunning” view of sea cliffs in the Tasman National Park – gets a big thumbs up.

There’s also Hobart’s Museum of Old and New Art and a food scene that is a “gourmet’s paradise”, Zeiher writes.

Tasmania has emerged from its humble convict origins to become a “wild and dramatic, cultured and quirky, isolated yet accessible” travel destination.

Tasmania is no stranger to the Lonely Planet guide. Hobart was named a top-10 city in 2013 and the east coast Bay of Fires was a top-10 region in 2009.

It is Australia’s only listing in the latest publication, and the Tasmanian government says the island state is punching above its weight and well on track to its goal of attracting 1.5 million visitors a year by 2020.

Hundreds of regions were nominated for the Lonely Planet listing before a panel of in-house travel experts scored each on a criteria of topicality, excitement, value and “that special X-factor”.

TOP 10 REGIONS IN 2015 ACCORDING TO LONELY PLANET Gallipoli commemorates 100 years since the ANZAC landing in 2015, which will bring scores of Australians to the rugged Turkish coastline to pay their respects. Rocky Mountain National Park’s 1000 square kilometres feature the most pristine mountain scenery on the planet, with the full spectrum of wildlife, climates, trails and terrains. Holy Toledo! This massive slice of Central American rainforest is a treasure-trove of caves, rivers, sinkholes and Mayan culture that feels like stepping back in time a few centuries. The virtues of this little island are well known to us – stunning natural scenery, forests, beaches, animals, innovative cuisine and one of the world’s best art galleries. Go now! Want to explore the end of the earth? Look no further than the isolated climes of northern Norway, known for its mystical Northern Lights and infamous Midnight Sun. For hardcore adventure seekers, a visit to Khumbu is out of this world. It’s better known as being the gateway to Mount Everest, with an elevation ranging from 3300 to 8848 metres. An offbeat alternative to overrun Bali, Flores is widely tipped to be Indonesia’s ‘Next Big Thing’, a tropical paradise that’s like stepping back to a forgotten time. This South American plateau is the driest non-polar desert in the world, and offers a spectacular landscape that’s about as close as you can get to strolling on Mars. Regularly dubbed Asia’s answer to Las Vegas, Macau is 65 kilometres west of Hong Kong and a world away from mainland China. Tinged with Portuguese influences, this city is a temple for extreme wealth.