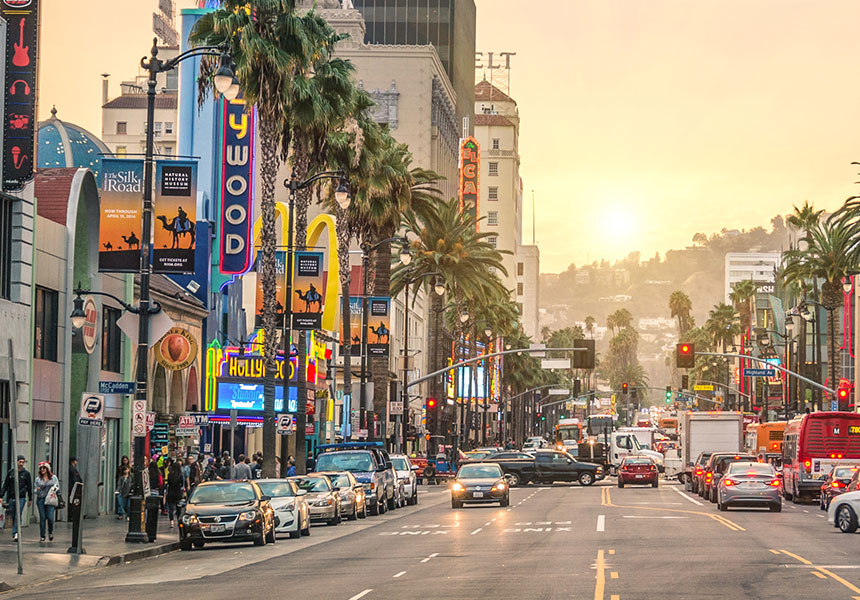 Think LA and the words bargain and cheap may not come to mind, unless you’re picturing the oh-so-seedy charm of Hollywood Boulevard.

• Seven clever ways to save on your next holiday
• The 10 best feelings only travellers understand
• Addicted to shopping? Meet the people buying nothing

However the thrifty thrillseekers among us know there are always bargains to be had, no matter what the city.

So stick your cap on backwards, strap on your rollerblades and fake abs and bring your best celebrity-style swagger, as we present … 10 ways to do LA on the cheap. Cheap takes on a whole new meaning at the city’s tourist-heavy Hollywood Boulevard, where the world-famous Walk of Fame collides with bong shops and cut-price stripper gear.

However, for the first-time visitor it’s still an exciting, not-to-be-missed (and free, hoorah!) experience.

Meet a faux superhero and breathe in the scent of celebrity as the stars descend on the Chinese Theatre for regular film premieres, and take a trip down memory lane by spotting more than 2500 stars inlaid in the pavements along the Walk of Fame.

A short detour will lead you to The Beatles’ stars outside the Capitol Records building, which was designed to resemble a stack of 45rpm records. Search your favourite star via the official Hollywood Walk of Fame website or app.

The Hollywood Chamber of Commerce holds 24 star ceremonies a year, which are free to watch. Next to be honoured is ‘80s boy band NKOTB. With lyrics as catchy as these, it’s only a shock the lads didn’t get a guernsey earlier: If time is at a premium, you’re trying to save a few bucks or you’re just lazy, forget a guided tour and catch a view of the iconic Hollywood sign from the top floors of shopping and entertainment complex Hollywood & Highland. The centre’s designers made a point of featuring the distant sign as the centrepiece of their architectural composition.

A few free facts for you: the Hollywood sign, which originally read ‘Hollywoodland’ was erected in 1923, by a development company wanting to flog land. Sadly for them, the idea didn’t take off until much later, by which time the ‘land’ part of the sign had been washed off the side of the mountain.

In the late ’70s, the Hollywood Chamber of Commerce started a campaign to save the sign, with patrons shelling out $27,700 per letter to save it. It’s been an icon for the motion picture business ever since. Everyone else is famous in this town, so why not get on board? Muscle your way into the audience of one of LA’s many TV shows. Try Jimmy Kimmel Live, filmed in the heart of Hollywood Boulevard, or others including Ellen and The Voice. Book ahead through website 1iota.com.

If you’ve got a little more time up your short-sleeve, you may as well become a fully-fledged extra. Try your luck via classifieds website Craigslist. One doesn’t like to overuse the adjective AWWWWESOME! but that’s exactly what this rooftop dance class is. If you’ve ever done jazz ballet, watched MTV, danced in front of a mirror or simply breathed, this one-hour, open-air cardio class will rock your socks off.

I stumbled upon Groov3’s class on a Monday night, learning to nail the choreography (well, stumble through) of Britney Spears’ (You Drive Me) Crazy alongside about other 100 fun-lovers. I enjoyed it so much I thought I had actually climbed the stairs to Heaven, not just to the roof of the Montalban Theatre, just off Hollywood Boulevard.

If you’re lucky enough to be visiting LA at the right time for one of these classes, you might catch burlesque, a soul choir or in-class surround sound. Cost: $15. When you get your fill of Hollywood, make like a buff Angeleno and head down to Santa Monica for some walking, running, rollerblading, cycling or posing. Take in that fresh sea air, buy a bargain-priced lunch at a local food truck and take a spin over to nearby Venice Beach. There you can take an eye-opening wander down the famous ocean front walk, complete with ‘medicinal marijuana’ stores, souvenir fun, fortune tellers and poets.

You could also go for a surf, shoot some hoops or watch some disco rollerskating.

No visit to Venice Beach is complete without a look at Muscle Beach Gym, an open-air bodybuilding area where ripped visitors such as Arnie Schwarzenegger come to commune with their abs. An episode of Baywatch apparently also took place here, featuring wrestling megastar Hulk Hogan.

The good news is you can just stroll by and take a perv, which would undoubtedly please the not-so-shy users of the gym greatly. For just $10, you can press some iron for the day. BYO orange Speedos. You’re probably no chance of getting into Michael Jackson’s old Beverly Hills home, however entry is almost guaranteed at the Historic Greystone Mansion and Park.

The stunning site is owned by the City of Beverly Hills, who open the park’s grounds to the public on most days.

The mansion has a torrid history – its first owner was killed in an apparent murder-suicide in 1929.

It has since been used as the backdrop for countless Hollywood blockbusters and TV series including The Big Lebowski, The Bodyguard, Entourage, Ghostbusters II and The Bold and the Beautiful. Ditch the theme parks and be a culture vulture for a day – or two – at Getty’s two separate locations.

The first, the Getty Center, presents world-class art in a stunning setting that’s in itself worth the trip. There are masterpiece paintings and drawings from the Middle Ages to the Impressionist period, changing exhibitions and outdoor sculptures. The cheapest way to get there is via Metro Rapid 761.

The Getty Villa, in Malibu, is modelled on a first-century Roman country house and features 1200 works in 23 galleries. Get there via Metro Bus 534.

Both Getty’s cultural centres are free, but for the Getty Villa you’ll need to reserve a timed ticket online. Once you’ve seen the stars on the Walk of Fame, head up to the Hollywood Rockwalk, where you can see the handprints of music gods including Queen, Stevie Wonder, Alice Cooper and AC/DC.

Inside, the Guitar Center has a selection of guitars that have surely inspired many a blistering guitar solo in-store. This is not so much an actual attraction, as a way to find some cut-price adventures that might suit your particular tastes. The app allows you to plug in your location and interests, and users share tips on discounts, happy hours and more. Many establishments offer deals for those that check-in using the app, so get searching! The traffic is a shocker in LA, so unless you want to watch your taxi meter going up for an interminable period of time, ditch the taxi and find a cheap bus. Try the LAX FlyAway Bus, which will ferry you direct from locations including Santa Monica, Hollywood and Union Station (in downtown LA) for $8.

Ten ways to visit Los Angeles on a shoestring