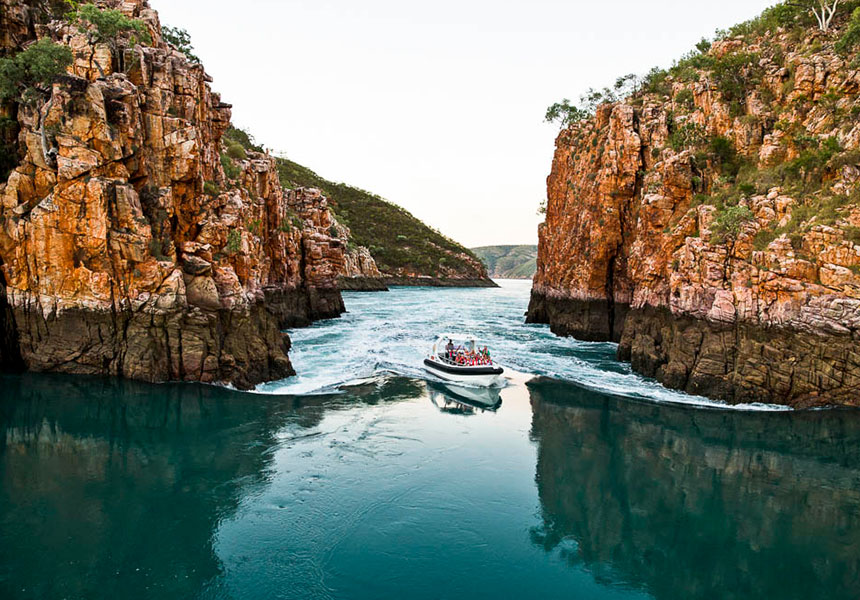 I’m being swept along by a waterfall. A white-knuckled stranger next to me yells: “We’re gonna die! We’re all gonna die!”

But moments later the hurtling stops. We’re in dead-calm water, a couple of grinning elderly women near the front of the jet-boat plead: “Please, can we do that again?”

• Castaway: eight of the best island escapes
• NZ’s most popular hike in Hobbit country
• The 10 best feelings only travellers understand

I’d rate the scary waterfall among my top 10 Aussie travel adventures. Of course, such listings inevitably spark vigorous debate – with furious arguments about why particular experiences are on or off the list.

But this, anyway, is my list of not-to-be-missed remote and adventurous Aussie holidays. The hardest work passengers encounter is choosing between road (usually 4WD) or light aircraft trips. Various operators with Australia Post mail-run contracts supplement incomes by taking passengers to some of the country’s most far-flung rural properties.

Popular starting points: Queensland’s Mt Isa and Quilpie or South Australia’s Port Augusta. While some rural folk chat, inviting visitors for a cuppa, others shy away from outsiders.

Last of the Coastal Freighters From Cairns, the Trinity Bay, plies its weekly Cape York-hugging Thursday Island route. The 80m ship, last of Australia’s coastal vessels, is a Torres Strait lifeline. Some of the 38 passengers put vehicles aboard for two or three-night cruises, driving one way. Mid-market Trinity Bay is so popular it seldom advertises. Close to the park, the little town of Tibooburra calls itself the “hottest town in New South Wales” – true only in the literal sense. Other sights in the area include Cameron Corner, where a plaque marks where NSW, Queensland and South Australia meet. There’s also a section of Australia’s famed 5614km Dingo Fence.

Inside the park, arid flatness is pockmarked by ridges called jump-ups because they appear to “jump up” from the ground. Emus and kangaroos dart in the distance while shingle-back lizards bask roadside. A vista from a jump-up’s summit reminds me of old cowboy movies: I imagine bad guys ambushing me between clusters of strangely-shaped rocks. A campground is called Dead Horse Gully. From a boardwalk above Kangaroo Island’s Seal Bay, boulders seem to be moving across the white-sand beach. I blink and discover the rocks are actually sea lions, part of a 1000-strong colony. Escorted by South Australian rangers, visitors stroll among these basking leviathans, making sure not to walk between protective mums and babies or between sea lions and the ocean. Among the world’s best up-close wildlife encounters, it’s also one of Australia’s most memorable. No, not near Katherine (though those are undeniably impressive) but farther west at little-known Karajini National Park. The Pilbara’s red earth is scarred by deep gorges weathered over millions of years. Some have rivers at their bases. Options encompass lazy ambles to boardwalk look-outs and challenging climbs or hikes. On far-north Queensland’s Thursday Island, 10-minute boat rides head for Friday Island where Kazu Takami of Kazu Pearls shows tourists how he seeds farmed oysters to make them produce pearls – and his staff serve Australia’s best Japanese meal to up to 20 guests.

Fish for sashimi and sushi is alive moments before being served; other just-caught fish is cooked. “Caged diving” with great white sharks is offered at South Australia’s Port Lincoln as is swimming amid farmed tuna. Off Western Australia’s coast, tourists swim alongside placid whale sharks (not really sharks at all).

But the most adrenalin-producing, in my book, is being lowered into a tank filled with 5m saltwater crocodiles. Mind you, you’re in a Perspex cage. In the Northern Territory, head to Darwin’s Crocosaurus Cove. There’s no feeling quite like having a fully-grown saltie making a beeline for you.

Some visitors, feeling brave behind protective shields, kiss the Perspex as croc snouts press against the other side.

Have you been anywhere in Australia off the beaten track? Let us know in the comments section below.