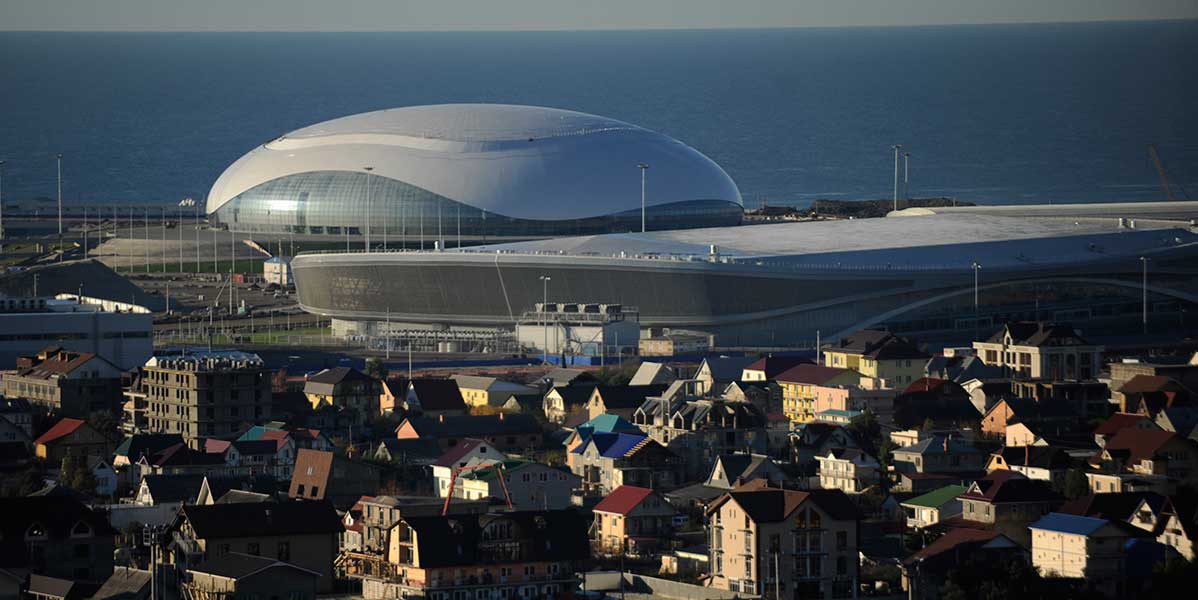 – You’re unlikely to find yourself roped into a skolling game with thigh-slapping man-mountains. Sochi is a bubble, sealed from everyday Russia. Instead you’ll confront international cuisine, with not a bowl of borscht to be seen. – The Black Sea spa town of Sochi – not to be confused with the Olympic village – was Joseph Stalin’s summer getaway in the ‘30s. Relic Soviet-era hospices hint at the years when factories sent their employees for R&R. – Rumours abound about one ski lift that you won’t find on the trail map at Sochi – Russian President Vladimir Putin’s private gondola. Sochi’s most famous holidaymaker – and the only head of state who appears to be auditioning to be the Old Spice guy – got wind of the town’s charms from other Moscow heavies. The tiger-taming leader stays at a compound-within-a-compound at the resort owned by government firm Gazprom. Sightings of a private cable car which rises about 800m from his residence to the ski slopes have been dismissed by others as a myth. – Sochi is at the same latitude as Cannes and weather can be mild, even in winter. Dress for Vancouver. – The Olympic Village may be toy town, but the mountains are the real thing. Vertical drop at the the alpine centre Krasnaya Polyana averages 1600m and the terrain will satisfy devoted skiers. Light, dry snow comes from the west and settles on sheltered slopes. Fans of Japanese powder can expect similar snow texture at Krasnaya Polyana in January and February. – For tips from local ski bums, go to Trikoni Tavern in the centre of Krasnaya Polyana. – Compared with the rest of Russia, everything is expensive. Expect to pay at least $3.50 for a coffee, $4.40 for a beer and $5 for a souvlaki. You won’t get a dinner reservation under  the antler chandeliers at Krasnaya Polyana’s Red Fox restaurant unless you pay a deposit of $367 a head, in advance. Lunch is a snip, with a deposit of just $150pp when you book. – Glamorous Russian waitresses staff the bars, but don’t expect their customer relations to live up to their looks. In Sochi, service isn’t one of their KPIs. – Abhazian cuisine is the local grub. Meat is served chunky, with spicy pastes. The historic Greek influence means that you can count on a good souvlaki. Sochi’s wines are similar to Australian dessert wines: sweet and sticky. – Local organisational culture is built on fear, so getting anyone to make a decision is a  struggle. Expect to be handballed up the tree before someone will change something for  you. – Games visitors can expect a precision-perfect stay with hosts who know how to put on a  show. Pomp and ceremony? Da! For four years, observers have been left slack-jawed at the speed and scale of Sochi’s construction achievements – claims of workers’ rights violations notwithstanding. – Islamist rebels in the nearby North Caucasus mountains, Russian nationalists and local mafia are all causing bomb-sized security headaches for Games organisers. In contrast, the worst that gay rights activists protesting Russia’s recent anti-gay law have been so far able to manage is rainbow-painted fingernails. – Athlete to watch: Aussie snowboarder Belle Brockhoff, who came out in September and is threatening to wear logos protesting the ban on gay “propaganda”. – The current DFAT advice about travelling to Russia is to “exercise a high degree of caution”, unless you’re going to the North Caucasus, in which case DFAT advises that you “do not travel”. Under this security shadow, spectators will, for the first time at any Olympics, have to be accredited. To enter the Olympic Park, ticket holders will need to have a “spectator’s pass”, for which you’ll need to provide a passport number and photo. – If you’re going to the old township, get a phrasebook and learn to say, “I’m not the guy you’re looking for.” Then you’ll be better off than the Australian who was in a restaurant toilet recently when two Russians started banging the door down. Turns out it was a case of mistaken identity by local mafiosi who were collecting money. – Expect every phone call, every email and text you send to be monitored. Aside from organisers’ efforts to keep terrorists at bay, Aussies doing business in Sochi say the old KGB culture still exists. Things you didn’t know about Sochi