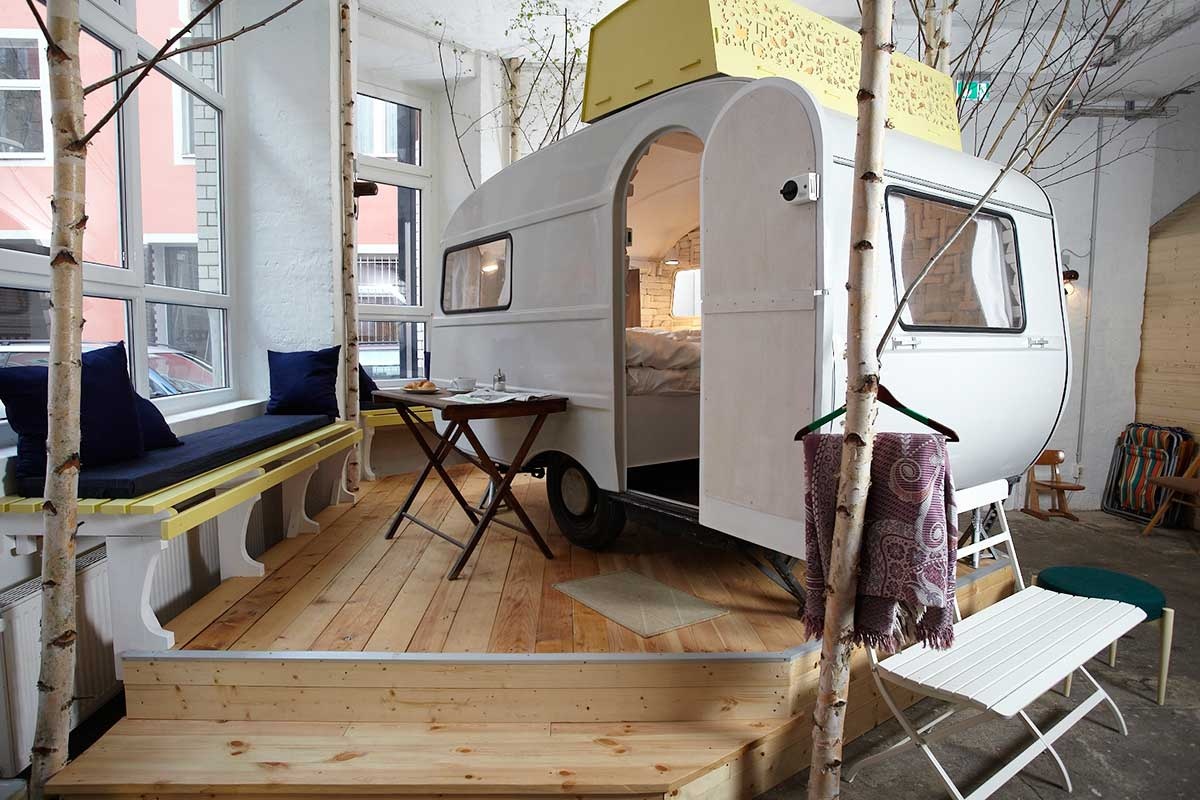 An indoor caravan park? So it seems. In creatively thriving Berlin, this whimsical hotel in a former vacuum-cleaner factory is home to several cute, neatly fitted-out retro caravans and cabins. And you won’t get wet on your way to the showers. There’s a café and garden and you’re in the heart of an area known for its bars and Turkish restaurants. By day, dazzling reef fish scoot past the glass-walled underwater bedroom, anchored four metres below the surface of the Indian Ocean. At night, spotlights highlight octopus, squid and other more reticent sea creatures. The three-level suite includes a roof deck for a spot of sunbathing or stargazing, and a sea-level deck. There’s only one underwater room at the resort, so book early.

Craning for a great view

Towering above a former shipbuilding precinct in Amsterdam, this monumental restored crane houses three split-level designer hotel suites in an extreme example of up-cycling. Each suite has its own designer theme (the moody Mystic Suite is ‘based on the language of the Orient’). The crane turns slowly in the wind, there’s an open-air jacuzzi (at 50 metres) and access to a sleek private boat or a scooter. Spectacular views. The hotel officially opened on January 1, 2014. A decommissioned 1800s fort, on its own island, turned 007-style luxury hotel. A private boat whisks guests from the Royal Clarence Marina to this coastal hideaway with its rooftop hot pool and sauna, open fire pit, bars, restaurants and restored lighthouse. Guests can gaze across to the Isle of Wight, practice their golf swing (with biodegradable golf balls) or perhaps sip a vodka martini (shaken not stirred).

I’ll have ice with that…

Sweden’s Icehotel – completely rebuilt every year – has just re-opened for the 24th season. Every year it’s different, with artists from around the world helping create unique rooms. You can sleep in a room that never gets colder than -7 degrees Celsius (that’s reassuring) but there is also ‘warm’ accommodation (chalets and hotel rooms). Snow-mobiling, ice-sculpting and dog-sledding are typical activities. A 12-metre high (3-storey) wood-and-straw ‘elephant villa’ with two-bedrooms and a lounge are at the heart of this eco-resort, beside the rushing Kumbukkan River and on the edge of Yala wildlife sanctuary. While sleeping ‘in the belly of the elephant’ may be most memorable, a timber tree house and a traditional mud-and-thatch house are other options. Real elephants still roam this part of the country.

For stargazers and moon watchers

Okay, it’s a long way to go (580 km from Santiago) but the crystal-clear sky in the Elqui Valley means that your PVC-geodesic dome room (with detachable roof) or your custom-built, glass-roofed wooden cabin-cum-observatory are stellar for stargazing. There’s a giant geodesic dome (the reception/restaurant/lounge) and an observatory with powerful telescopes. There’s even a pool. And wi-fi.

Rock of the ages A hotel of 18 rooms in caves carved into volcanic rock over the centuries, in southern Italy’s remote, UNESCO-listed village of Matera. Fittings are minimal but design-savvy (a freestanding Starck-design bathtub, traditionally woven fabrics). The restaurant is in an ancient church, hewn into the rock. Five unique tree rooms (and more on the way) but you have to love the Mirrorcube, floating magically in the trees in the arboreal forest. There’s also a UFO room, and a Bird’s Nest (seriously – it looks like a giant bird’s nest). Oh, and a tree sauna for 12 people. Everything has been designed for minimal enviro impact. Serene forest views. The restaurant’s organically farmed and wild produce includes reindeer, bear, moose and cloudberries.

You stayed WHERE? Hotels with a twist