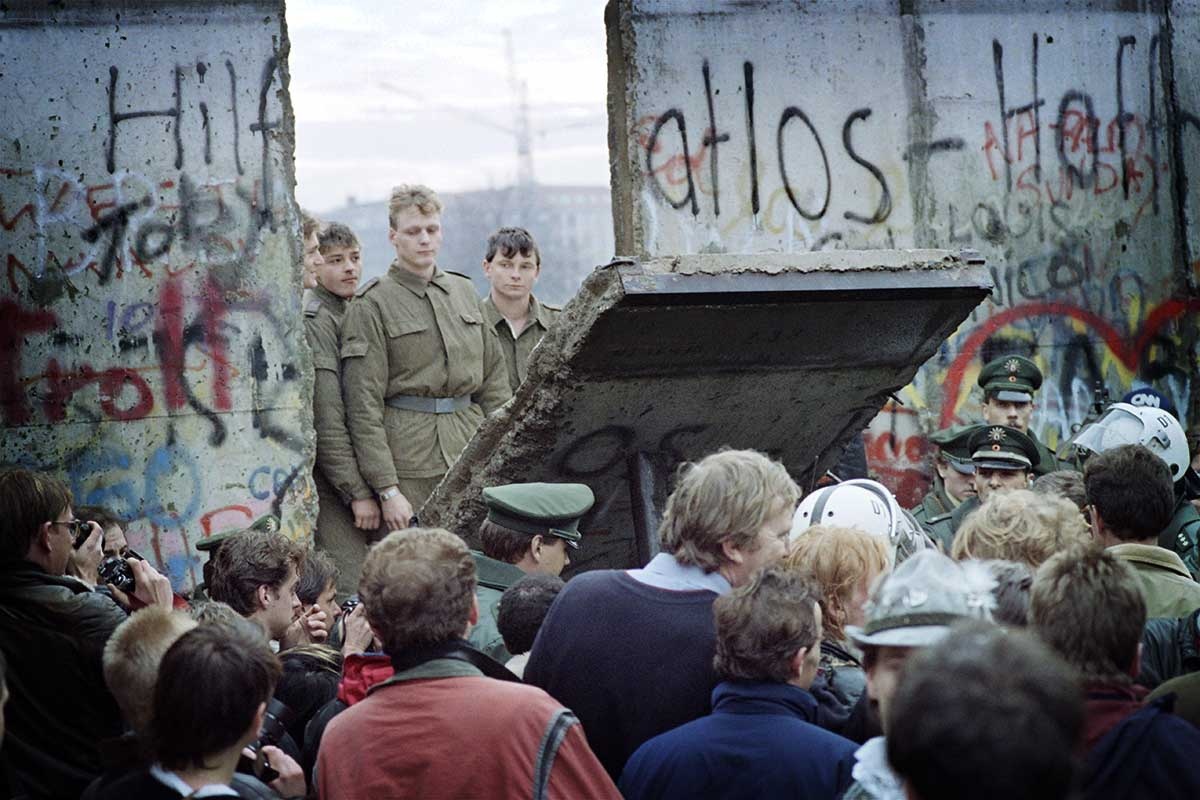 The Berlin Wall comes down in 1989. Photo: Getty

Each year, the hot spots are not just the “happening” places, but also the places where major events happened in years gone by. In the past year, for example, significant anniversaries brought travellers everywhere from Canberra (a year of centennial events) to Virginia (the 150th anniversary of the Battle of Gettysburg) to 50th anniversary commemorations in Dallas (JFK’s shooting), London (Doctor Who), Liverpool (Beatlemania) and elsewhere. If you like anniversaries, here are 10 of the places to be in 2014.

Nelson Mandela’s passing (Pretoria, South Africa)
Of course, it is still too early for details, but it’s safe to say that Mandela’s recent death will be commemorated with gusto upon its anniversary in December 2014. Many South Africans are calling for a public holiday. (Mandela Day, his birthday on July 18, doesn’t have that status.) If you missed his memorial, you might have another chance.

Fall of the Berlin Wall (Berlin, Germany)
To honour this anniversary on November 9, special events and museum exhibitions are planned throughout Berlin, focusing on the divisions of Germany and Berlin, the Cold War, and the reunification. One of the highlights seems slightly ironic: along the former site, a new temporary Berlin Wall will be built for the weekend – albeit not with bricks, but with thousands of illuminated white balloons (which should be visible from outer space). In one piece of nostalgia, visitors will also be able to drive into East Berlin in an original GDR Trabant car.

D-Day (Normandy, France)
As we approach the June anniversary of the seminal World War II battle, 14-day (including a London-Normandy ferry trip), 8-day and 5-day anniversary tours are on offer, following in the footsteps of the Allied forces.

World War I (all over Europe)
Naturally, many nations will commemorate the centenary of the Great War (and to a lesser extent, the 75th anniversary of World War II). Germany will have many “lest we forget” memorials, Anzac Day in Gallipoli will probably be even busier than usual (bracing for its own centenary in 2015), and Britain has hatched a £50 million ($92 million) plan, including special events all over Britain, culminating on August 4, the day the war began. London’s Imperial War Museum in will reopen in mid-2014, unveiling a £35 million ($65 million) refurbishment of its World War I galleries.

Civil War (Petersburg, Virginia)
If you are surprised that the world is still so fascinated by World War I, observe the American South’s obsession with the U.S. Civil War. The six-year sesquicentenary is still under way, with commemorations in 48 states tied in to every major conflict and event. Virginia had the most battles, and highlights will include “living history” reenactments of skirmishes at Buchanan (April), New Market (May), Trevilian Station (June), Briscoe Station (October) and Cedar Creek (October).

Christoph Gluck’s birthday (Salzburg, Austria)
Mozart Week, from 23 January to 2 February, is a festival for highbrow music-lovers. Despite its name, this year’s focus won’t just be Salzburg’s favourite son (though Mozart’s music will certainly be heard), but the 1714 birthday of Bohemian composer Gluck, one of the greatest pre-classical composers. The big show will be Gluck’s opera Orfeo ed Euridice, along with orchestral concerts featuring musicians from around Europe.

Shakespeare (Stratford Upon Avon, UK)
For the anniversary of Shakespeare’s death, his home town of Stratford-Upon-Avon (which usually has the Bard’s works in frequent rotation) will offer a year-long program of events, particularly in March’s ‘Shakespeare Week’. Meanwhile in London, the candle-lit Sam Wanamaker Playhouse will open in January, resembling Shakespeare’s own theatres as closely as safety restrictions will allow.

Founding of Trinidad (Cuba)
You might not have considered visiting Trinidad, the charming Cuban city with Afro-Cuban dancing, Caribbean beaches and a place (second behind Paris) in Lonely Planet’s latest list of top 10 cities. It is celebrating the 500th anniversary of its foundation by Spanish conquistadors with a series of fiestas and cultural events. If you want to be somewhere hip this year, this would be hard to beat.

Battle of Bannockburn (Scotland)
If the U.S. Civil War is too recent for you, Scotland’s most famous battle will be reenacted (with similarly obsessive precision) on 28-30 June. The National Trust of Scotland promises it will be “brutally realistic”. But the weekend will also offer highland feasts, mediaeval markets, contemporary music concerts and a busy children’s program.

Battle of Clontarf (Dublin, Ireland)
People seem to like commemorating battles – and in this case, it’s fair enough. It is nearly a millennium since Ireland’s proudest moment, when their army, led by King Brian Boru, drove out the Viking invaders on Good Friday. Rather than reenactments (after all, the battle took the lives of 10,000 people, including Brian Boru himself), Ireland is providing something far more peaceful: “Battle of Clontarf millennium tours” of Ireland, going from six to 10 nights, focusing on the major historical areas – but taking in some splendid countryside all the way.