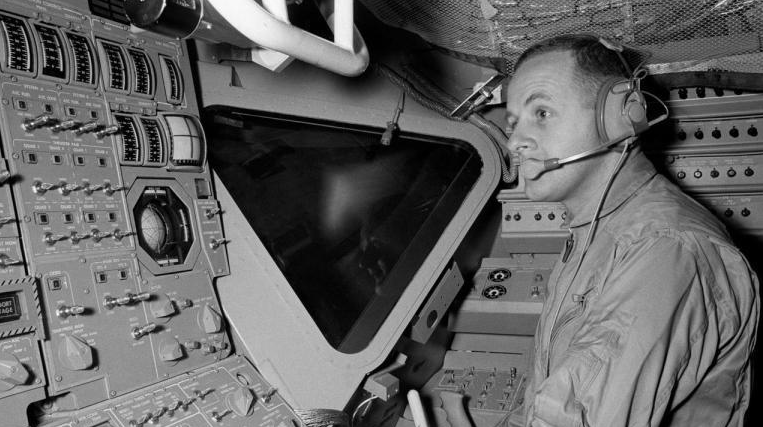 Phillip Chapman trained in an Apollo capsule but never made it into space. Photo: NASA/AAP

Had it not been for then-president Richard Nixon’s decision to trim NASA’s budget, Melbourne-born Philip K. Chapman’s name would be a fixture in the history of space exploration.

Dr Chapman, who died 12 months ago at the age of 87, was slated to rocket into space in 1975 as part of the SkyLab B mission, but in 1972 the launch was aborted as a cost-saving measure.

He would have been the first foreign-born astronaut to ride an American rocket into orbit.

Now, finally, the frustrated astronaut and pioneer of orbital commerce will have his greatest wish posthumously fulfilled when some of his ashes will be taken on a memorial flight into orbit before returning safely to Earth.

The flight is scheduled for November 30 this year.

Dr Chapman’s ashes will then be launched again, this time permanently, on a deep space mission.

His wife Marie Tseng says she is pleased he is finally getting to live out his boyhood dream of getting off “this little rock” and venturing into the vastness of space.

“He was an adventurer and was committed to supporting commercial space businesses so the Celestis flights resonated well with his life goals and personality,” Ms Tseng told AAP.

“He would be sorry that his living self will not be flying because he would want to conduct scientific experiments and revel in the experience.

“The joyful and exciting Celestis flights are wonderful ways for us, the survivors, to commemorate Phil.”

Eyes on the skies

Born in Melbourne in 1935, Dr Chapman spoke of his intergalactic dreams from the age of 12 and dedicated his life to advancing space exploration and civilisation.

He trained as a pilot in the Royal Australian Air Force before joining the Australian National Antarctic Research Expeditions for a winter on the frozen continent to experience living in isolated and difficult terrain.

Eager to get to the US, which had the only space program in the 1960s, he joined MIT’s Experimental Astronomy Lab and in 1967 became NASA’s first foreign-born scientist-astronaut.

He was mission scientist for Apollo 14 – one of the six that landed humans on the Moon – and claimed to be the man behind the televised ‘feather and hammer’ experiment, where moon walkers tested the three centuries-old Galileo Galilei theory that all objects fall with equal speed in a vacuum. (They did.)

“The Skylab in which I had hoped to live is now a tourist attraction … I sometimes visit it when I am in Washington but it is very sad to see it wasted,” he would tell author Colin Burgess for his 2019 book Shattered Dreams: The Lost and Canceled Space Missions.

Dr Chapman resigned from NASA not long after his mission was scrapped but never gave up on his passion.

An early space business pioneer, he continued to work in the field, developing the private sector commercial space industry – significant as it is that industry now enabling his life’s ambition to be realised with this posthumous space flight.

“We are honoured to provide Dr Chapman with his ‘first’ launch to space,” said Charles M Chafer, co-founder and CEO of Celestis, Inc – the memorial spaceflight service.

“His legacy as a scientist, astronaut and business leader is reflected in his family’s choice to honour him with a final journey among the stars.”

Alan Kohler: The hubris of central bankers and the limits of money
James Webb space telescope may be about to transform quest for alien life
Today's Stories