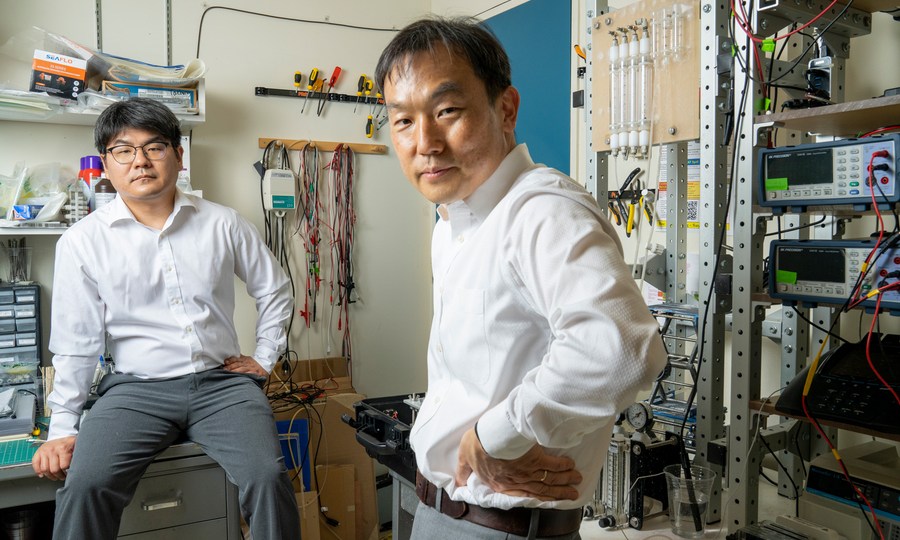 The new invention from Junghyo Yoon, left, and Jongyoon Han could save communities in crisis. Photo: MIT

If you’re planning to maroon yourself on a desert island – or making a sea change to a town running out of fresh water – you might want to include a recent invention from the Massachusetts Institute of Technology in your survival kit.

MIT researchers have developed a portable desalination unit, the size of a suitcase, weighing less than 10 kilograms, that requires less power than a mobile phone charger.

So don’t forget to also buy a small portable solar panel. You can get them online for about $70.

The desal unit runs with the push of one button and “automatically generates drinking water that exceeds World Health Organization quality standards”.

There are portable desal units already commercially available but they “typically require high-pressure pumps to push water through filters, which are very difficult to miniaturise without compromising the energy-efficiency of the device”.

The filters also need to be replaced.

A no-fuss solution in a crisis

The MIT uses a technique called ion concentration polarisation (ICP), which was pioneered 10 years ago by Dr Jongyoon Han, a professor of electrical engineering, computer science and biological engineering.

Rather than filtering water, the ICP process applies an electrical field to membranes placed above and below a channel of water.

The membranes repel positively or negatively charged particles – including salt molecules, bacteria, and viruses – as they flow past. The charged particles are funnelled into a second stream of water that is eventually discharged.

The process removes both dissolved and suspended solids, allowing clean water to pass through the channel. Since it only requires a low-pressure pump, ICP uses a modest amount of energy.

In a prepared statement, Professor Han said the unit could be deployed in remote and severely resource-limited areas, such as communities on small islands or aboard seafaring cargo ships. It could also be used to aid refugees fleeing natural disasters or by soldiers carrying out long-term military operations.

“We worked for years on the physics behind individual desalination processes, but pushing all those advances into a box, building a system, and demonstrating it in the ocean, that was a really meaningful and rewarding experience for me,” he said.

Who was the King? How Elvis Presley devoted his life to a consuming passion
G7 nations vow to quit coal – but they won’t put a date on it
Today's Stories