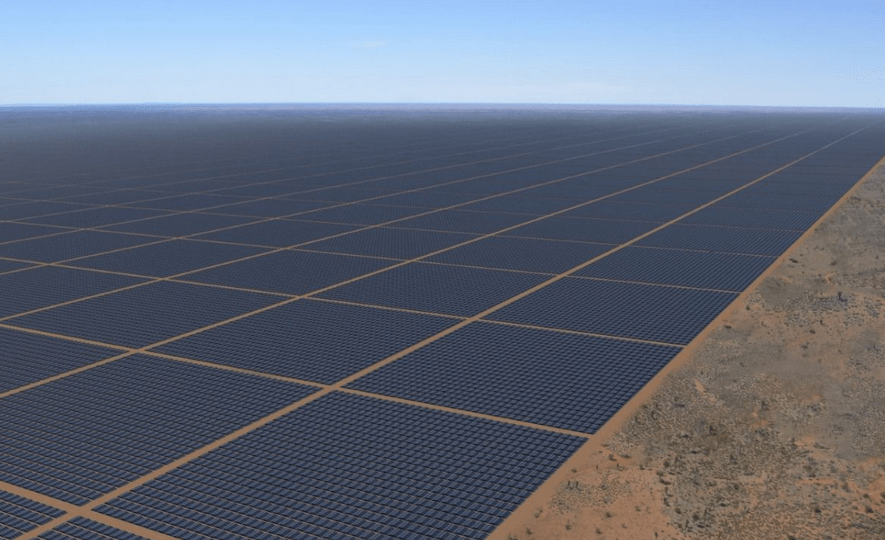 Solar panels carpeting the Outback as far as the eye can see, that's what's coming to the Northern Territory.

Backed by billionaires Mike Cannon-Brookes and Andrew Forrest as cornerstone investors, the Sun Cable project will connect Darwin with Jakarta and Singapore.

They say the world’s first intercontinental renewable power system, the Australia-Asia Power Link, is a blueprint for exporting across the globe.

The project will harness sunshine from an array the size of a cattle station in one of the sunniest locations on the planet, halfway between Darwin and Alice Springs.

The audacious undertaking dreamed up by Sun Cable will include a 12,000 hectare solar precinct and energy storage near the NT town of Elliott.

“This is a reality,” Charles Darwin University’s Emeritus Professor of Physics Jai Singh told AAP. “This technology is mature.”

The site was selected for high solar radiation, low annual cloud cover metrics and a long history of ecological disturbance from pastoral activities, according to environmental approval documents.

It is also close to the Adelaide to Darwin railway, which is handy for delivering prefabricated solar units and other components, and the Stuart Highway for vehicle access and fibre optic cable connection.

Solar innovators at Sydney-based 5B are the preferred solar technology supplier to Sun Cable but expect to compete with others.

Their pre-fabricated, pre-wired array – that can take solar panels from any of the major module makers – can be rolled out using automation, which saves time and is safer in hot working environments.

The Maverick system also requires less packaging to get it there, which means less waste.

5B co-founder and CEO Chris McGrath says there are challenges in ramping up a supply chain to build 20 gigawatts – whether it’s across 20 projects or one large one.

“The Sun Cable project will absorb around 250,000 5B Mavericks, deployed at a peak rate of approximately one per minute,” he says.

Automation will play a big part in addressing the scale challenge.

“When you start talking about gigawatt projects everything becomes scarce – workforce, transport and logistics to move equipment around, land, accommodation.

“That’s why the prefabrication, minimal intervention to deploy, robotics, becomes so critical.”

Vast amounts of solar energy will then be transmitted, first through a high voltage direct current (HVDC) cable system and then under the sea.

Ahead of the build, 5B will set up a factory in Darwin.

All the technology exists

Mr McGrath says renewables are now the cheapest form of new energy generation and can also be used as a diesel replacement at remote mining operations.

“All the technology exists, we just need to crack on with deploying it at scale, quickly,” he says.

“Australia has this enormous opportunity to both export green electrons and use ultra-low-cost massive scale solar energy to drive our domestic economy.”

As well as sending clean energy to Asia via the 4200km subsea extension cord, a new digital precinct in Darwin will be able to host and cool bulk data using abundant renewable energy.

The last legislative hurdle, a bill for the development of the solar generation plant and power link to Asia, was introduced to the NT parliament on Thursday by Chief Minister Michael Gunner.

“It will be a major economic driver and it will put the territory on the international map when it comes to renewables,” he said.

Sun Cable founder and CEO David Griffin says the bill provides certainty for the world-leading project that will also mean 800 megawatts of dispatchable renewable energy capacity to the Darwin region from 2026.

By 2027 the extension cord is expected to supply up to 20 per cent of Singapore’s electricity, with the solar power exports worth $1 billion annually.

“It will do good to both nations and it might even invite more nations, especially in Southeast Asia, to invite Australia to produce more for them,” Prof Singh says.

Alongside these plans, a digital hub is under development by Australian data centre operator NextDC.

Known as D1, it aims to give Darwin businesses a competitive edge and provide a much needed post-pandemic boost.

“We have also secured the rights for an additional and significant land parcel for our second Darwin site, D2,” NextDC CEO Craig Scroggie says.

More than 15 hectares, he says D2 will make room for the long-term development of a “hyperscale campus” to serve the Asia South region connected to Darwin by new international submarine cable networks.

A high-speed fibre network will link the precinct to renewable energy, space and artificial intelligence industries as well as the next generation in agriculture, mining and defence.

“With more than 500 million people within 50 milliseconds of Darwin, the NT’s digital potential is huge,” says HyperOne CEO Bevan Slattery.

He says HyperOne’s $1.5 billion network, which was granted major project status in February by the NT government, will allow traffic to travel from Darwin to the rest of the country.

Sun Cable’s project has a life span of more than 70 years and the proponents say it will create over 1750 jobs during construction and 350 during operations.

Alongside these plans to export solar power, Prof Singh says the Australian government should do more to encourage its use on home soil.

“Solar is good economics and good for the people living on Earth, so we should go for it.”

Back from the brink: Tiny bush carnivore gets a new lease on life
Today's Stories

The Northern Territory’s sunshine will soon be lighting up Singapore