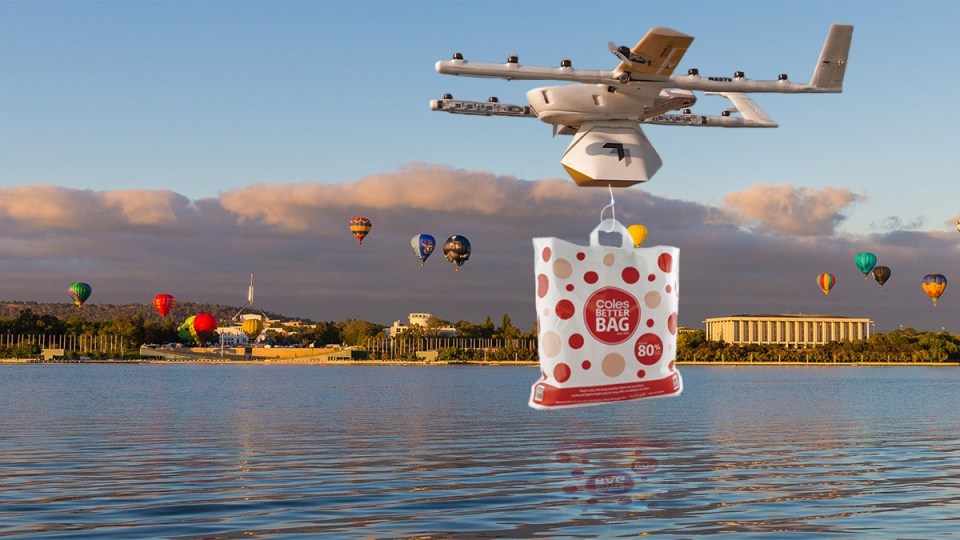 Look! Up in the sky. It’s a bird, it’s a plane – nope, it’s a drone delivering groceries to your doorstep.

Coles has announced it is launching a pilot program in partnership with global drone tech company Wing, to deliver groceries to your doorstep via the unmanned aircraft.

It is the first major supermarket in Australia to offer the unique service, vowing deliveries within minutes.

Wing users in Canberra will be the first to trial the Coles pilot program in Australia, with curious shoppers ordering their groceries through the Wing app.

The drone company is owned by Alphabet, which also owns Google.

For the past few years, Wing has been conducting similar trials across Canberra and Logan, Queensland.

It also operates in Finland and the United States.

Dr Matthew Marino, senior lecturer in the School of Aerospace Engineering and Aviation at RMIT, told The New Daily the pilot program is a natural progression in terms of where the industry is headed.

“They started off with basic things like [delivering] pizzas, coffees and ice-cream, and now they’re trying to see how it copes with proper delivery logistics,” Dr Marino said.

The pilot program enables Wing to test its system as a whole and see if it can cope, both in terms of safety and with demand, and in a way that everyone is comfortable with.

So, how does it work?

Wing is not flying to and from your local Coles. Instead, it has a dedicated facility in Canberra where items from the supermarket are packaged and secured upon order.

Although the drone is autonomous, Wing pilots are supervising the aircraft from behind a desk.

Not everything from Coles will be available for take-off, but the select range of 250 popular goods include bread, fresh produce, snacks, convenience meals, healthcare items, kitchen essentials and toilet paper.

There is currently no minimum spend or delivery fee.

Deliveries typically take about 10 minutes or less, with the quickest record time – from order to delivery – being two minutes and 47 seconds.

That said, one Wing customer in Logan waited 40 minutes for her Boost juice to arrive, so quick deliveries aren’t a 100 per cent guarantee.

A future with drones

Wing drones are designed to deliver small packages that weigh about 1.2 kilograms, suitable for staple goods.

So you would still need to hop down to your local supermarket to pick up heavier items.

“For full delivery loads, 20 to 30 kilograms, you would need a totally new aircraft, a totally new certification and they’re not there yet,” Dr Marino explained.

But he does believe the technology for larger cargo-carrying drones, that can lift between five to 10 kilograms, will be available in the next two to three years.

Wing is far from the only drone delivery service taking off around the world. Its competitors include FedEx, UPS Flight Forward and Flytrex, all based in the US.

And in Ireland, there’s Manna. The word means food delivered from heaven or, in this case, a drone.

CEO Bobby Healy told the TechFirst podcast in August that Manna was doing 2000 to 3000 deliveries a day, from burgers and fries to piping-hot coffee – “foam intact” – and even mobile phones.

“So think that key KPI, one person, roughly two orders per hour. One Manna personnel can do 20 deliveries per hour … So our cost is one-tenth the cost of using the road. It’s literally that simple.”

Mr Healey described drone deliveries as a “trillion-dollar industry being born as we speak”.

“It doesn’t use fuel, it can use sustainable electricity to recharge batteries, you’re not contributing to traffic and you don’t need road infrastructure,” he said.

“It’s basically fly there and fly back and it’s very, very convenient.”

As Dr Marino said, drone deliveries in our future are “inevitable”.

Coles gears up to deliver groceries by drone in Australian first