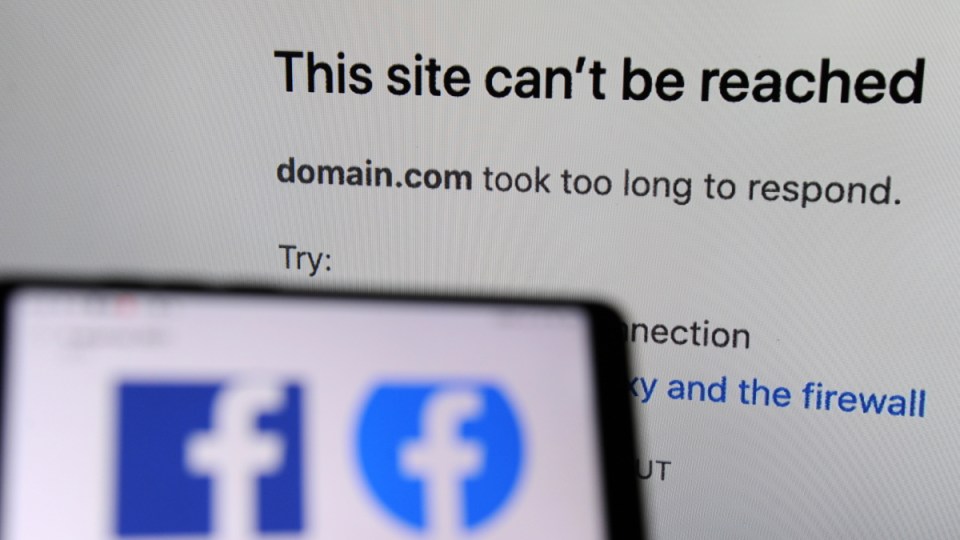 Australians awoke on Tuesday morning to a worldwide social media outage, with Facebook, Instagram and WhatsApp platforms all going down.

Facebook provided little detail as to what caused the six-hour outage, saying only that it was to do with configuration changes to routers.

But how did a wire change cause such chaos?

Read on to find out what we know about the Facebook outage, and what it means for you.

Facebook and its sister platforms Instagram and WhatsApp went offline for about six hours on Tuesday, issuing an error message to users who tried to connect.

The message told users the site or app could not be reached.

This suggested there was a problem with the domain name system (DNS), as this is what enables web addresses to take users to their destinations.

Essentially, Facebook took away from computers and mobile phones the roadmap needed to find its website, leaving millions of users with nowhere to go.

BGP is a mechanism that connects information from internet providers around the world and is responsible for routing internet traffic to specific groups of internet addresses.

It is “the routing of the networks of networks”.

As a result, if you typed in Facebook.com during the outage, the browser or app returned the error message after failed attempts to connect.

And with billions of users trying to connect at once, it slowed down the global internet speed.

“Where this goes wrong is when one aspect of that process between us typing in the name of the website in our computer and the server that contains the information we want to display, something going wrong in the middle there,” Professor Angus told The New Daily.

Facebook said its engineering teams had determined the cause of the outage as “changes on the backbone routers that co-ordinate network traffic between our data centres”.

Professor Angus explained an incorrect update meant the information shared between users and Facebook’s centralised server would be unable to connect.

The outage stopped key digital records that tell computers and internet-connected devices how to find Facebook.com.

“It meant that there were no pathways essentially out and that’s largely the fault of BGP – that protocol could not resolve or find another way to route network packets outside of Facebook’s closed server infrastructure to the wider internet,” he said.

“There was a massive worldwide internet slowdown on account of this going down, because what happens in these kinds of situations is you end up in these time-out states, where it’s still trying to find a way to get the information and get to Facebook.”

Could it happen again?

A centralised server is where there is one central repository of data for all users and one central authority who can access that data: Facebook.

So extensive was the outage that Facebook employees were unable to access their offices as their security passes stopped working.

Professor Angus said he had faith in “robust standards and protocols” that for the most part keep our internet going, and that these outages were rare.

But Professor Burgess said the outage was an eye-opening experience.

“It goes to show if Facebook’s full infrastructure ever broke down, it would have pretty big implications for the basic function of so many services in our society,” she said.

“And it makes you think: Do you want that?”

Should we be worried?

Although professionals stopped short of calling the outage a concern, they said it was a good reminder for people not to put so much trust in one platform.

Independent digital ethicist John Lenarcic told The New Daily humanity has developed a sense of attachment to living off Facebook, Instagram and WhatsApp.

“All of those platforms are ways people have a sense of community and share messages and so forth to loved ones … it’s kind of part of a person’s universe, a lot of these platforms,” Mr Lenarcic said.

“We take technology for granted almost nowadays. We kind of think we log on and we turn on our phones and we are instantly connected and we have this sense of trust.”

“And I think if something disappears and there’s no kind of explanation, there’s a breach of that trust.”

Mr Lenarcic said it is rare for people to have only downloaded one internet browser – and the same should go for social media, too.

He suggested people look for alternatives and embrace diversity in social media platforms.

Echoing Professor Burgess’ sentiments, Professor Angus said the “only thing” he would be worried about is the monopoly on traffic that some of the larger platforms have.

“Underneath all of this, there was a dream of the early internet and early web that has since really been subverted by commercial interests that a few very, very large platforms have come to dominate the internet and web,” he said.

“They are swaying some pretty big weight in trying to get things set up in a manner that would be advantageous for them and their commercial positions.”