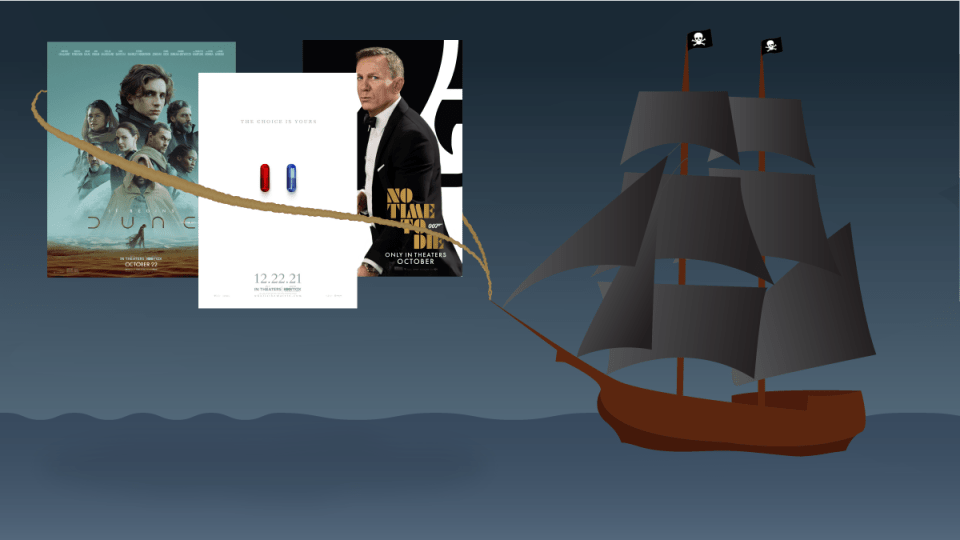 Australians are ready to set sail on a new wave of piracy of films and television, with the delayed release of some of this year’s biggest blockbusters in Australia.

Dune, the new James Bond film No Time To Die, Matrix Resurrections and the second instalment of Venom are all scheduled for international releases up to three months before they are available in Australian cinemas.

And Australians are unlikely to wait.

Film and internet studies professionals expect a significant increase in the piracy of these box office titles in Australia when they release internationally.

“The biggest incentive of piracy has always been to try and get things as early as other people,” Curtin University internet studies Professor Tama Leaver told The New Daily.

“And if Australians aren’t getting access to blockbuster films, then they are going to find other avenues.

“It’s very likely that we will see a meaningful upswing in film piracy in Australia while there are these significant delays.”

In an era of synchronised distribution of content across the world and spoilers galore online, anything more than a two-week wait risks tempting people to pirate content.

For Dune, Australians must wait almost three months to watch it legally, while the titles of Bond, Matrix and Venom will be held back from Australian cinemas for three to six weeks from release.

Delays of releases in Australia

Professor Leaver predicts Dune, No Time to Die and The Matrix Resurrections will be heavily pirated films in Australia.

Both Dune and The Matrix Resurrections will be able on HBO Max – a streaming service unavailable in Australia.

As a result, there will be high-quality versions online the same day as its cinema release.

“That will be peak piracy,” Professor Leaver said.

“What we will see with some of the pirate networks that have edged away just because they weren’t really needed, I think we will see renewed interest.”

Film and screen Associate Professor from the Queensland University of Technology, Dr Mark Ryan, echoed Professor Leaver, saying there is a definite possibility of more piracy due to blockbuster delays.

He said without a consistent flow of films to cinemas, Australians will resort to other ways of watching the movies on time.

Professor Leaver said it is unlikely to be a systemic problem, with cinema distribution dates in Australia to be synchronised again when lockdowns end.

Too many streaming services push Australians to pirate

Dr Ryan said streaming services have already been affected by the new wave of piracy.

With the collection of 25+ streaming services in Australia, many people are already pirating one-off ‘must-see’ films and TV shows from services they haven’t yet subscribed to.

“Content has never been more fragmented than it is now across subscription-based services,” Dr Ryan told The New Daily.

“Now if something exciting comes out that’s on a platform you don’t want to watch it raises the question: ‘Can I shell out another $10 a month to subscribe to three subscription services or four? Is it worthwhile and would it just be better off to download it?’

“It definitely could lead to more piracy.”

Professor Leaver questioned whether “piracy in the old sense” like torrenting and downloading files, was affecting these streaming services, or if the problem of illegal online streams, or sharing passwords, which he did not consider piracy, were more concerning.

He said password sharing among friends and family for streaming devices is already quite widespread.

“I think as we see a huge number of streaming services, people will reach a limit and they will almost certainly find other ways to see that content,” he said.

The damage delays have on Australian cinema

Dr Ryan said the delays of major Hollywood movies to Australian cinemas is already having a significant impact on viewing behaviours.

He said the slow down in the release of blockbuster (or tentpole) films, has meant a lack of consistent flow of high-profile films released in Australian cinemas.

As a result, it’s having a short-term impact and may have a long-term effect upon people’s desire to go and watch movies in cinemas.

“So the delay and slow down in the number of big, high-profile films being screened in cinemas may mean that people just become more comfortable watching these films on pay-per-view on their own entertainment systems at home.”

He said without a consistent flow of products to cinemas, they have to screen more independent films and retro screenings to make up for delayed films.

“The cinema used to be most important because it was seen as that first release point, the first place to see a premiere of something important,” Dr Ryan said.

“At the moment, people can’t trust that because there is an inconsistency in the flow of products into the market.”

Australia to enter new age of piracy with blockbuster delays