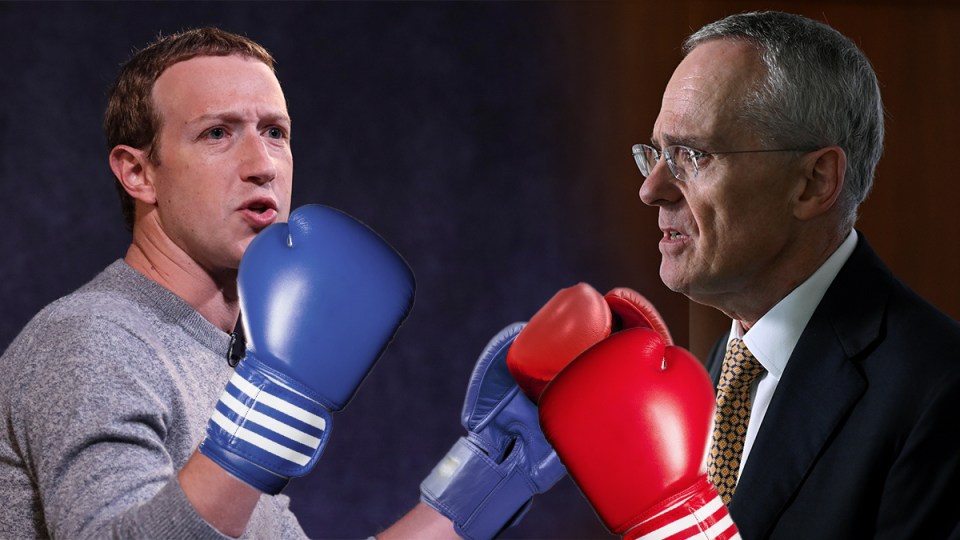 ACCC boss Rod Sims has hit back at Facebook after its "threat" to ban Australian news content.

Facebook has threatened to pull the plug on Australian news if forced to pay for it, in what experts say is a “desperate” attempt to avoid setting a global precedent.

Australians could be barred from sharing local news content on Facebook and Instagram, the firm said, with the threat representing an escalation in Facebook and Google‘s campaign against proposed regulation forcing them to pay for news.

In an online statement on Tuesday, Facebook Australia managing director Will Easton said the Australian Competition and Consumer Commission’s draft news media bargaining code “misunderstands the dynamics of the internet and will do damage to the very news organisations the government is trying to protect”.

“Assuming this draft code becomes law, we will reluctantly stop allowing publishers and people in Australia from sharing local and international news on Facebook and Instagram,” Mr Easton said.

“This is not our first choice – it is our last. But it is the only way to protect against an outcome that defies logic and will hurt, not help, the long-term vibrancy of Australia’s news and media sector.”

“The draft media bargaining code aims to ensure Australian news businesses, including independent, community and regional media, can get a seat at the table for fair negotiations with Facebook and Google,” Mr Sims said.

Curtin University associate professor in internet studies Tama Leaver said the stakes are high for Facebook and Google, as the ACCC’s code would set a precedent that other countries would follow.

“It was inevitable that Facebook would hit back and do something. While Google had jumped into the fray earlier and more loudly, Facebook’s very much been on pause,” Dr Leaver said.

The threat shows the firm is “terrified that we’ll see legislation that could actually set the precedent for Facebook not just paying for news in Australia, but in every other jurisdiction”, he said.

Treasurer Josh Frydenberg did not mince words in his response to Facebook’s statement, saying that Australia does not “respond to coercion or heavy-handed threats”.

Facebook’s missive follows a public letter by Google last month, warning Australians the way they use Google search and YouTube is “at risk from new government legislation”.

Google also added an alert on its home page pointing users to the letter, and created the hashtag #AFairCode.

There is nothing in the new legislation blocking Facebook from following through on its threat to pull Australian news content from its platforms.

I don’t think the ACCC expected Facebook to go quite so nuclear,” Dr Leaver said.

“While they’ve baked in a lot of protections stopping Google from, for example, blocking Google News, they didn’t really put in any protections that would prevent Facebook doing this.”

If Facebook follows through it could mean the site loses relevance to Australian users, but the move could also open the door for the further spread of misinformation on the platform.

“What’s left to fill the void? My real fear would be misinformation. Disinformation would be the only stuff left,” Dr Leaver said.

Such a move would be a bad outcome for Australian consumers and the nation’s democracy, he said.

“A considerable number of people get a good proportion of their news from Facebook for good or ill, and I think people seeing less news is implicitly going to be bad for democracy,” Dr Leaver said.

Facebook could be willing to sacrifice revenue in Australia to deter other countries from following in the ACCC’s footsteps, Swinburne University digital media expert Belinda Barnet said.

They are so afraid of paying for news content that they’re prepared to damage their own business to avoid it,’’ Dr Barnet said.

About 17 million Australians use Facebook each month, while 19 million use Google each month.

“One-third of Australians get their news from Facebook,” Dr Barnet said.

“If Facebook pulls news, they will lose all that data harvesting, all that eyeball time.”

“Google and especially Facebook have become the ‘news’ version of Netflix, however the difference is that Netflix is paying for the content it streams, while Facebook and Google are not,” Dr Mirzaei said.

“It is a long-overdue legislation that has been perfectly summarised by Free TV CEO Bridget Fair, as helping to balance the power.”

Facebook is “not used to balanced power” and “is already under pressure” after being boycotted by many brands​ “due to their lack of policies preventing hate speech content and misinformation,” Dr Mirzaei said.

The social media giant “has now become desperate and irrational by refusing to change its habit”, he said.

“With a lack of clear alternative news platforms, Facebook is hoping that their scare campaign may work, and that the ACCC may revise the legislation,” he said.

“However, Facebook is turning a win-win scenario into a lose-lose in the short term.

“While platforms like Flipboard or Apple News will benefit the most in the short run, the mid-term solution to this will be the launch of news applications covering as many outlets as possible.”

Facebook and Google “not only get to share content for free, but also generate significant profit from advertisers as they gather data and insights from reader’s behaviours”, Dr Mirzaei said.

“They know they will lose a lot of advertising income as readers migrate to other platforms, but they want to hold on to the monopoly they see around their platforms,” he said.

“The government and ACCC will stay firm on this and this is the right move. This could and should have been proposed by Facebook themselves – if they were a higher purpose-driven organisation.”

‘Heavy-handed threats’: ‘Scare campaign’ could backfire on Facebook and Google in Australia