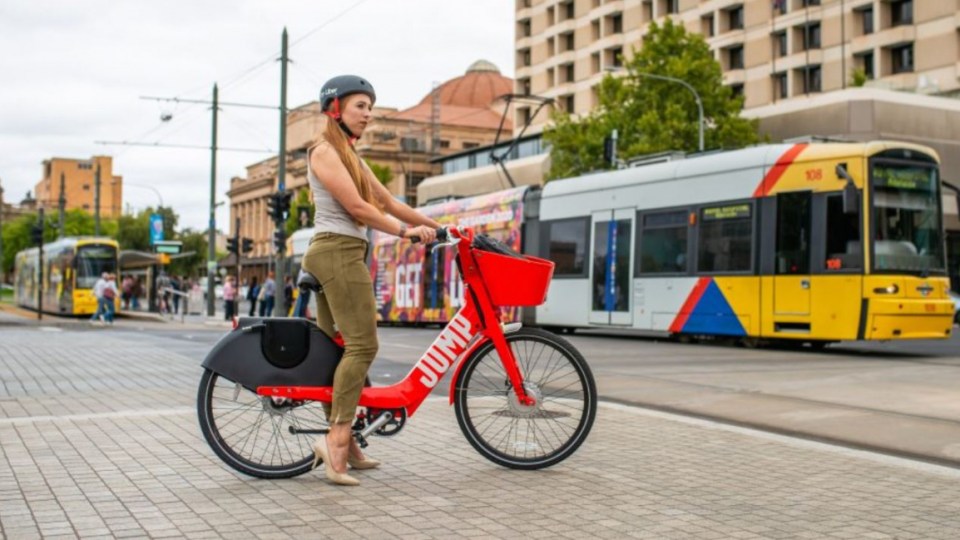 Jump is the latest bike-share program to hit Australian streets, with trials of the Uber-backed e-bikes launched in Melbourne and Adelaide on Wednesday.

The move follows revelations that the rideshare platform has plans to launch a “flying taxi” service called Uber Air, with Melbourne one of three cities selected for trials.

But Uber will need to stay grounded if it wants its e-bikes to succeed in Australia where previous bike-shares have failed.

Last year, the Victorian government axed the Melbourne Bike Share scheme, which was launched in 2010.

The government blamed a lack of riders, saying that each bike was being used just once a day on average.

In 2018, Singapore-based company oBike pulled its dockless bikes out of Melbourne following a spate of controversies.

The yellow bikes were briefly ubiquitous not only on the city’s streets, but also in rivers and trees.

Shortly after Jump’s Melbourne launch, photos of one of the e-bikes dumped in a suburban pond surfaced online.

“We are so disappointed with the launch of the scheme this week we have already seen one of those fabulous bikes end up in a pond,” Melbourne Lord Mayor Sally Capp said.

This sort of behaviour is frankly so passe.”

Despite the shaky start, there are reasons to be optimistic that Jump e-bikes will be as successful in Australian cities “as in other cities around the world where they have been deployed,” Professor Dia said.

Jump uses the Uber app, allowing riders in the inner-city areas where the scheme is being trialled to reserve e-bikes in their vicinity.

Riders then scan the bike in the app, pay $1 to unlock it, and ride it at a cost of cents for each kilometre ridden.

Once finished, the rider locks up the bike and supplied helmet, and leaves it for the next rider.

The bikes feature “a number of technological advances that can work in their favour”, Professor Dia said.

“For example, the company says they have a number of initiatives in place that have been introduced to prevent some of the past incidents from taking place,” he said.

“Each bike is equipped with GPS tracking, which will alert a user if they are trying to leave the bike in a dangerous place or non-parking zone.

The user agreement also outlines the parking guidelines, which stipulate that footpaths must be kept clear, bikes be parked a minimum 1.5 metres from properties and the cable lock be used to securely park the bike.

Users could face a ban from other Uber apps, including UberEats, if they damage a bike.

According to Uber, the bikes will be inspected every 24 to 48 hours to ensure they are charged and have not been vandalised.

At 35 kilograms, Jump e-bikes are heavier than oBikes, and ‘‘would not be as easy to throw around’’, Professor Dia said.

Although these changes should go some way towards preventing the “anti-social behaviour” that dogged oBikes, it “remains to be seen” how Australians “react to this initiative”, he said.

Jump a ‘step in the right direction’

Jump is “a step in the right direction to make this sustainable mode of transport available not only for leisure trips but also for commuting”, he said.

From Barcelona to Brisbane, cities around the world have embraced ‘micro-mobility solutions’ including e-scooters and e-bikes

These low-speed electric transport options have become “a necessary and important part of the mix of urban mobility solutions”, Professor Dia said.

They can help to both alleviate traffic and cut car emissions.

Many cities take these solutions seriously because they can be a huge deal for reducing congestion and emissions,’’ Professor Dia said.

These “emerging” modes of transports are especially effective for “first and last kilometre travel”, between home or work and a train station, and for commuting short distances of less than 10 kilometres.

Around one in five trips from home to work in Australian capital cities are five to 10 kilometres long, the 2016 census showed.

Shifting even a small percentage of these trips to e-bikes or e-scooters would help reduce our reliance on cars, ease congestion and improve amenity.’’

Professor Dia said that micro-mobility solutions “disrupt” traditional modes of transport by cutting the number of short trips taken by private cars, “which is good for cities and for reducing congestion and emissions”.

With Jump, Uber hopes to succeed where other bike-share schemes have failed