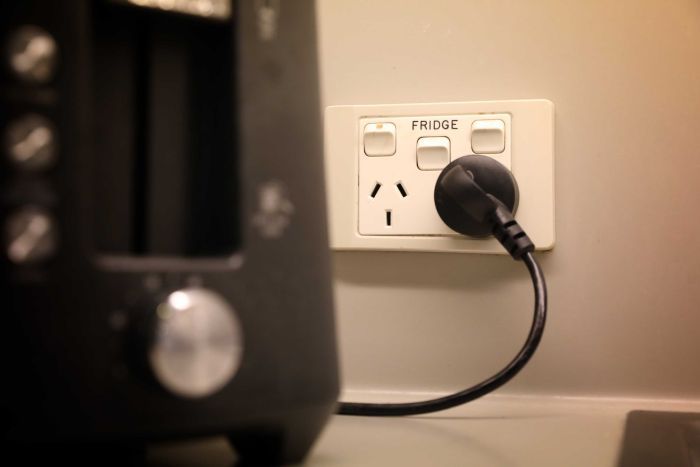 We've had a closer look at whether it pays to be savvy about your electricity usage. Photo: ABC News

Some people can’t stop themselves from reaching for an empty socket and switching it off if it has been left on.

Others can have multiple appliances on standby and not give it another thought.

But who is right? Or more precisely, is one group just wasting their time or is the other wasting money?

We’ve had a closer look at whether it pays to be savvy about your electricity usage.

Does it really matter if I switch off power at the wall?

In a comparison of appliances in 2016, consumer group Choice found that if you had a lot of appliances that were inefficient, you could be paying more than $100 per year for unnecessary power.

According to the Department of the Environment and Energy, appliances that aren’t switched off (so they’re in standby power mode) can account for about 3 per cent of your energy bill.

Overall, Choice’s research found the difference between the most efficient and least efficient devices on standby was marginal in most areas.

But when looking at different multi-function printers for example, the highest standby cost was a whopping $118.24.

There is also a bigger cost.

How do you tell if something is using standby power?

Usually most devices will have a light or some other indication they are on standby. For example, you’ll usually see a blinking light on your television or printer.

Another way you can check is if you can feel heat coming from an appliance that you aren’t using, such as your laptop charger when it’s not attached to your laptop.

Mr Barnes said most appliances and devices have improved in recent years and adopted a 1-watt benchmark when it comes to standby power usage.

“What that basically means is that for every hour that the machine sits there in standby mode it shouldn’t consume more than 1 watt of power, which is not very much,” he said.

That adds up to about $2.50 a year on your power bill (with typical cost usually about 30 cents per kilowatt hour).

Granted, it doesn’t sound like much, but you could have 50 devices on standby, so it pays to switch off when you can.

If you’re still unconvinced, Mr Barnes says air-conditioners are a good example of something you could switch off at the wall.

“[Years ago], 100 to 200 watts standby was quite normal for an air-conditioner, so it made absolute sense to turn them off then.” Mr Barnes said.

“But even in these days it’s still worth thinking about doing.

“If you only ever use your [split-system air-conditioner] over summer – or maybe winter depending on where you live – it’s worth actually turning it off at its power point for the unused part of the year, because it will just be sitting there using power for no good reason.”

There are also just some devices that can’t be turned off, like your fridge.

In those instances, Choice recommends making sure you’ve got one that combines the lowest running cost and best performance.

What about switching off lights?

This one isn’t as clear cut.

Don’t get us wrong, it’s still good practice to turn off lights in rooms you’re not using.

But Carbon + Energy Markets director Bruce Mountain previously told the ABC it doesn’t make that much of a difference to your bill.

“With modern LED lighting there’s not much you can do to decrease your consumption by switching off your light, it’s not going to make terribly much difference,” he said.

So what are some things I *can* do to keep the house cool?

According to the federal environment department’s Your Home guide, heating and cooling take up about 40 per cent of your household energy use. So it’s important to find other ways to cope with the heat.

Your ceiling fans might be set the wrong way

Did you know you can use ceiling fans to warm up the place in winter as well? It turns out they have a winter and a summer setting.

While this might not seem that important in summer, the wrong setting could be a reason why your fan isn’t cooling you down as much as you think it should.

Most fans tend to have this switch on the motor and usually labelled winter or summer or forward and reverse.

The benefit of using fans is that they are the cheapest option to run and have the lowest greenhouse impacts, according to the government’s Your Home website.

It says, typically, the air flow created by a fan provides a similar improvement to comfort as reducing the temperature by around three degrees Celsius.

You should be planting trees … strategically

Using the shade provided by trees seems like an obvious one, but the government’s Energy Department also recommends being smart about your landscaping.

For example, to make the most of shading your home, you need to know the “size, shape and location of the shadow that your shading device casts”.

The government recommends using deciduous trees (trees that drop their leaves) over evergreen if you want to block solar heat but let in sunlight during the winter.

They can shade your roof for about five to 10 years if you plant them about 1.8 metres to 2.5 metres from your house.

Keep the blinds (and windows) closed, instead of open …

… At least during the hottest parts of the day. This is particularly the case if they are lighter and can help reflect the heat (or sun’s rays) back out of your room,” Mr Barnes said

“When it’s hot, you want to close the place up, keep it cool and try and avoid as much as possible that heat getting in.

“You can open them in the evening or at night to let warm air out and cool breezes in.”

I’ve tried everything and my house is still hot

If you’re struggling to stay cool with other alternatives to air-conditioners, it might come down to how your house is designed.

Some homes are just hot in summer and/or cold in winter.

“No matter what, sometimes you can have a house that just isn’t built for the right climate, unfortunately,” Mr Barnes said.

“We tend to not think very much of the cold in winter in Australia and unfortunately sometimes they [houses] have been compared to glorified tents.”

The climate inside your home can depend on a range of factors, including the type and size of your home and how it is designed.

It will also depend on your lifestyle and preferences, including how many appliances you have and the habits of you and your family/housemates.

Should I switch off power at the wall? Here’s what you need to know for your next electricity bill