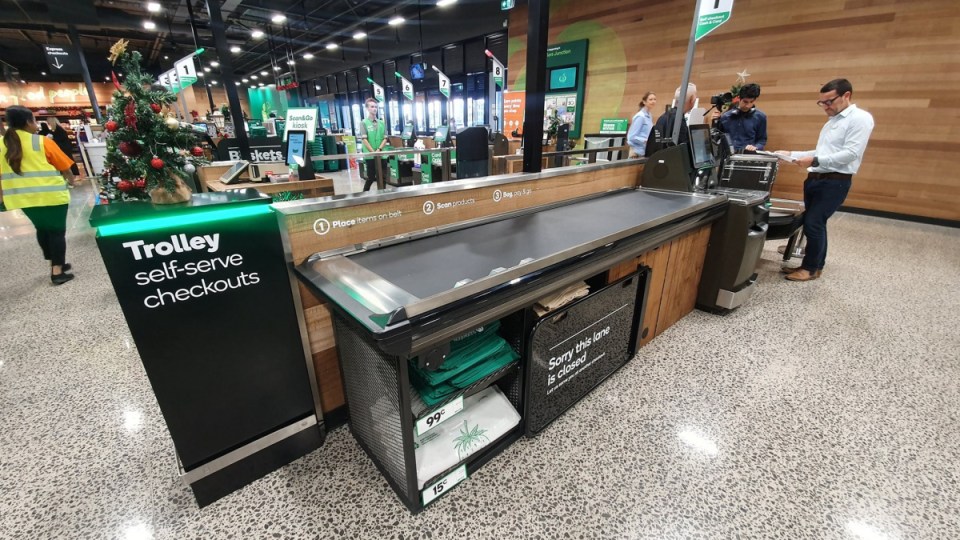 Well would you look at that. Woolworths is trialling its second trolley-friendly, self-serve checkout lane. Photo: Facebook

There’s a special kind of awkwardness that has arisen with the advent of self-serve checkouts at supermarkets: The dance around the shopper trying to scan and bag a shopping trolley full of goods.

No matter how spacious, there never seems to be enough room for the carrier and its owner, not to mention fellow shoppers.

Woolworths is seeking to remedy that woe, with the second rollout of a self-serve checkout trial especially made for trolleys.

The supermarket’s recently opened Millers Junction store in the Melbourne suburb of Altona North is the second across the country to give the new checkout a whirl – the first was at Gregory Hills in Sydney.

A Woolworths spokesperson said they were designed to make shopping easier for customers.

“It’s about providing another convenient option for customers and is designed to complement the manned checkouts and traditional self-serve options at the store,” the spokesperson said.

“We want to give our customers choice, so they can pick the checkout option that works best for the shop they’re doing on any given day.”

Woolies will be monitoring feedback on the lanes before committing to any more rollouts.

Aisles they are a-changing

Supermarkets are trialling and implementing a bunch of new concepts in a bid to keep customers’ loyalty, in an increasingly competitive market.

It’s behind the scenes, but Coles has dropped $150 million on robots at its fulfilment centres so it can double its home delivery capabilities.

It has also jumped on UberEats, meaning you can get a barbecued chicken delivered to your door.

Woolworths is also employing robots – they zoom around the stores detecting and cleaning up spills.

The first made its debut at the Gregory Hills store earlier this year.

On the subject of self-serve checkouts, both supermarkets are testing new ways to stop people scanning gourmet tomatoes as brown onions – Australian shoppers have admitted to ‘forgetting’ to scan something at the checkout, or pitching it through as something cheaper.

To combat this, both businesses are installed cameras and monitors in selected stores to keep an eye on shoppers.

This could all fall by the wayside, however, as supermarkets in the US move closer and closer to fully register-free supermarkets – technology uses shelf sensors and cameras to track customers’ movements throughout a store, then pings the bill to their chosen account as they leave.