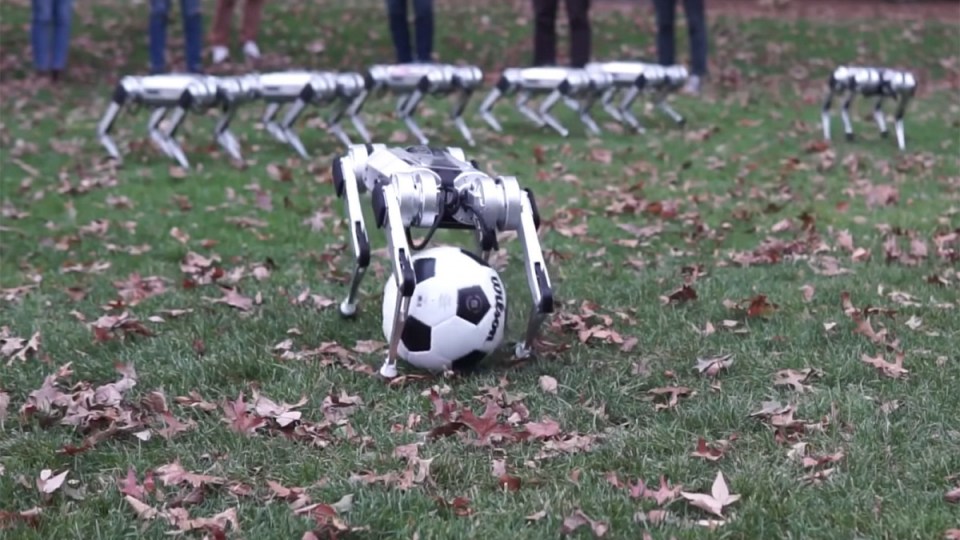 One of the nine soccer-playing robots that were recently unveiled by the Massachusetts Institute of Technology. Photo: Youtube

Everyone loves robots. But what about these adorable pet-size robots that can backflip, dribble like some of the world’s great soccer professionals, and play fight?

Massachusetts Institute of Technology (MIT) robotics students have developed remote-controlled ‘Mini Cheetah’ robots that appear to have the same joie de vivre as a chihuahua.

The MIT invention came to light after a video showcasing a group of nine machines frolicking around a leafy lawn went viral.

Each robot is powered by a series of 12 motors, and can be controlled completely untethered by a researcher.

Unlike their animal kingdom namesake, these cute four-legged droids cannot reach lightning-fast speeds, clocking in at a maximum running pace of around 14 kilometres per hour.

“When it’s running, its feet are only on the ground for something like 150 milliseconds at a time,” lead developer Benjamin Katz said in a statement.

“So it can do really dynamic stuff, like jump in the air with every step, or run with two feet on the ground at a time. Most robots aren’t capable of doing this, so move much slower.”

While it all looks like a bit of harmless fun, MIT researchers believe their robots could one day provide some impactful real-world benefits.

The team hopes to one day see the Cheetah robots used to assist in search-and-rescue missions, aged care services and even with deliveries.