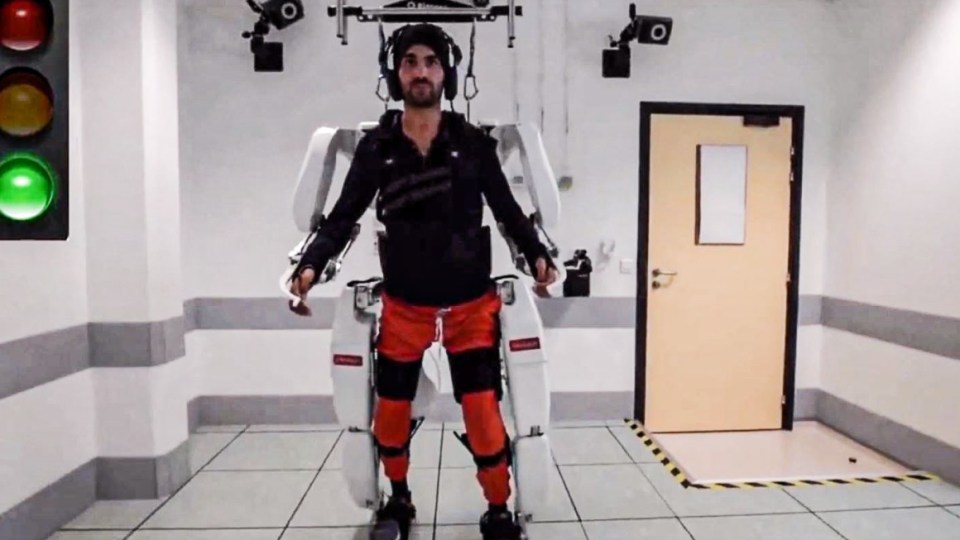 The patient,Thibault, became a teraplegic four years ago following a fall at a nightclub. Photo: University of Grenoble

A man paralysed from the shoulders down has been able to walk and move his arms while contained in a full-body robotic exoskeleton.

Via brain implants, he controlled his movements while in conversation with a computer.

This is news making exciting headlines around the world – and is an amazing breakthrough.

But the severely disabled man remains just that – and will not be suddenly striding down the streets like Robocop.

The man, who has shared his first name only – Thibault, 30 – was suspended from a ceiling frame to keep him balanced.

Thibault worked as an optician before he fell 15 metres in an incident at a nightclub four years ago.

He started work with the scientists from the University of Grenoble two years ago.

Initially, after being fitted with two implants, he learned how to control a virtual character in a computer game.

After mastering this, he moved on to walking in the suit – using his brain signals to control his movements, with 71 per cent success.

At this stage, the technology is a proof-of-concept exercise.

If it were adapted for everyday use, it would be more to allow quadriplegic people to operate their wheelchairs using their minds, instead of struggling with awkward joysticks.

And even then, it would only be available to people with significant financial resources.

Indeed, the French scientists who engineered this elaborate experiment, when publishing their results, were at pains to caution against hype – largely for fear of improperly getting the hopes up of wheelchair-bound people everywhere.

Alim-Louis Benabid, a neurosurgeon and professor at the University of Grenoble, France who co-led the trial, said in a prepared statement his team had created “the first semi-invasive wireless brain-computer system designed … to activate all four limbs”.

Dr Benabid said previous brain-computer technologies have used invasive sensors implanted in the brain, where they can be more dangerous and often stop working.

Previous experiments were “limited to creating movement in just one limb, or have focused on restoring movement to patients’ own muscles,” he said.

In this trial, two recording devices were implanted, one either side of the patient’s head between the brain and the skin, spanning the sensorimotor cortex region of the brain that controls sensation and motor function.

Each recorder contained 64 electrodes that collected brain signals and transmitted them to a decoding algorithm.

The system translated the brain signals into the movements the patient, Thibault, thought about, and sent his commands to the exoskeleton.

Over 24 months, Thibault carried out various mental tasks to train the algorithm to understand his thoughts and to progressively increase the number of movements he could make.

Commenting on the results, Tom Shakespeare, a professor at the London School of Hygiene and Tropical Medicine, said it was “a welcome and exciting advance” but added: “Proof of concept is a long way from usable clinical possibility. A danger of hype always exists in this field.

“Even if ever workable, cost constraints mean that high-tech options are never going to be available to most people in the world with spinal cord injury.”

Paralysed man walks by using his mind, an AI program and robotic limbs