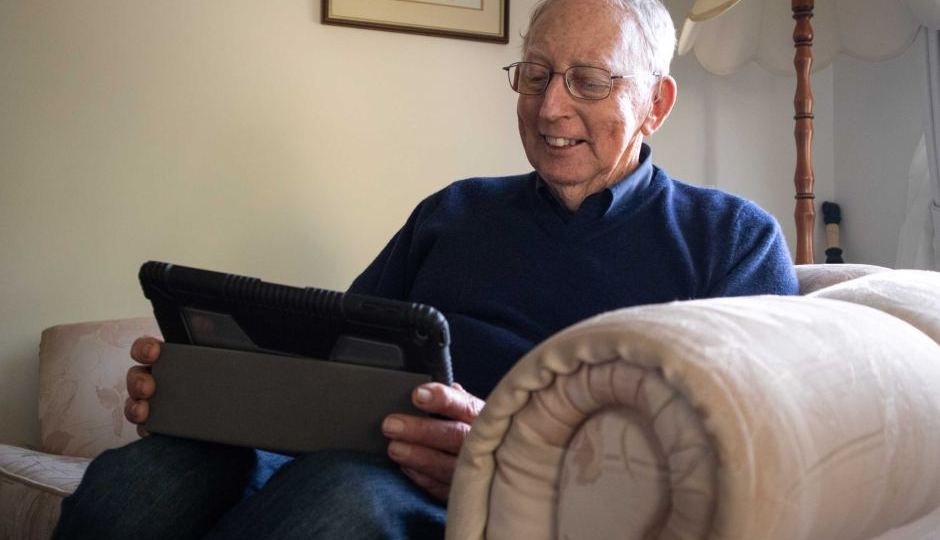 John Broadbent has thousands of pictures on his tablet but does not think there is much worth saving. Photo: Emma Wynne

John Broadbent has a vast trove of correspondence and memories on his iPad.

Since retiring as a school principal 20 years ago, he and his wife have travelled to Pakistan 10 times as volunteer English teachers.

But he is unconcerned with what will become of his emails and pictures after he is gone.

“I’ve never thought about what is going to happen when I toddle off this planet, because there is nothing really important on [the iPad],” he said.

“The family can just clear it if they want to.”

In an era when families talk online instead of writing letters, store their pictures in the cloud and have an array of digital accounts, priceless pieces of history risk being lost because most people do not understand how to manage their digital legacy.

“The majority of older Australians assumed that their digital objects or digital assets will be passed on to the executors or children or inheritors automatically, even if they don’t define it,” she said.

“Some of them believed their digital assets don’t have any value.”

In the pre-digital age, a person’s papers, photographs, diaries and letters could usually be accessed easily by family members – they were stored in a drawer or a box in a cupboard.

“But if they don’t mention which digital objects need to be preserved or passed onto someone else, those digital objects might be lost forever, for instance family photos,” Ms Dissanayake said.

“Sometimes the digital objects have a monetary, legal, historical or sentimental value.”

She said many people also assumed their digital devices and accounts automatically formed part of their estate and would be accessible to their family and executors, but that is not necessarily the case.

“Sometimes you can guess [passwords], but most of the time you can’t,” Ms Dissanayake said.

Barbara Backhouse was unconvinced when she was first given a tablet, and left it sitting in a drawer for several years before she started using it – she now describes it as a lifeline.

“Apart from my car and my wheelchair, it would be the third most important thing in my life,” Ms Backhouse said.

But she is uncertain about whether anything she stores digitally has any value.

“I think they would be for people who are looking into their family tree; I think that would be of value,” Ms Backhouse said.

“You might write a book or your life story.

“One of the things I thought about was putting a note on the iPad about what to do when I die – you can add things to it when you think of them.”

Neither Ms Backhouse nor Mr Broadbent have shared their passwords with family members.

Ms Dissanayake said it was a common misconception that heirs and relatives would have the right to access a loved one’s online accounts, including social media, after their death.

She said governments should do more to raise awareness of digital legacies and look at legislation that might allow people to bequeath their digital objects.

“Most older people assume that just by telling their family members [the passwords] that they have the access or the rights to use their digital account or content, but we should consider putting that in a written document,” Ms Dissanayake said.

“People think their accounts can be transferred, but upon their death some accounts may be shut down or the transferability is not allowed, even to a family member or partner.”

Mr Broadbent has been taking computer classes at his retirement village and recently learned to organise his collection of photographs into albums – but he is still not convinced they are of any value.

“When we were in Pakistan we took photos that were interesting to us, but to anybody else looking at them … well, what’s that?” she said.

“People have so many photos of their own these days, so what they see on our computer doesn’t matter.”

Ensure your digital affairs are in order before you die, researcher warns