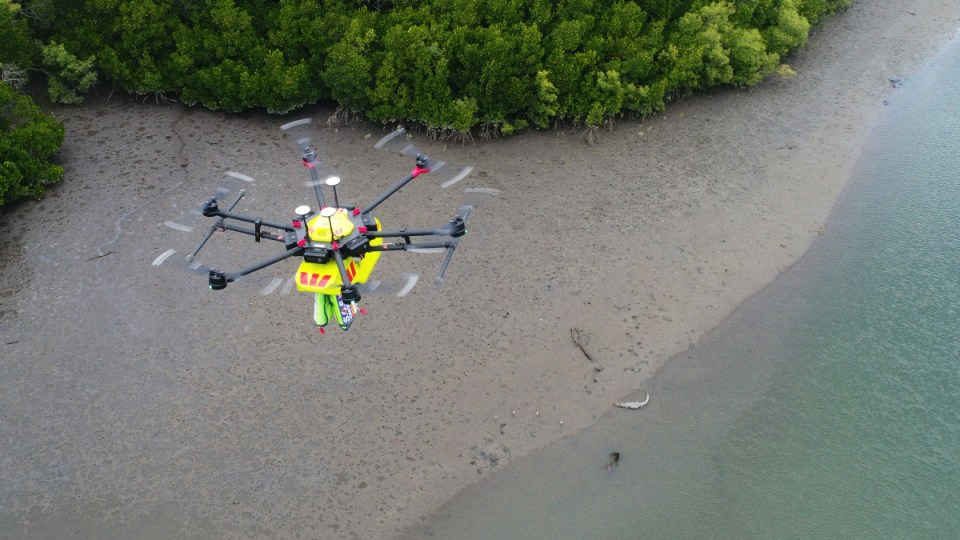 AI-equipped drones can alert lifesavers to the presence of crocs and other threats. Photo: Westpac Little Ripper

Many fear the potential for Artificial Intelligence (AI) to be weaponised against humanity, but Australian lifesavers are showcasing the positive power of the technology with a drone that can prevent crocodile attacks.

On Thursday, lifesavers in Queensland demonstrated how a drone backed by a ‘CrocSpotter’ AI-algorithm can reveal the presence of crocs before they become a danger to humans.

Developed by researchers from the University of Technology Sydney (UTS) in collaboration with Westpac Little Ripper and Amazon Web Services, the technology was initially designed to protect beachgoers from sharks.

CrocSpotter and SharkSpotter are two of five ’spotter’ AI algorithms developed by The Ripper Group and UTS.

In 2018, a Westpac Little Ripper drone performed the world’s first rescue by a drone at Lennox Head in NSW, dropping an inflatable pod to save two teenagers in massive surf.

A Westpac Little Ripper drone beams a live video stream to a pilot on the ground while the AI-algorithm “washes” over the video and alerts the pilot to a possible threat.

The threat – in this case a crocodile – is highlighted by a flashing red box, which draws the pilot’s eyes directly to the part of the iPad used to fly to drone.

The algorithm has a 93 per cent accuracy of identification, making it vastly superior to the naked eye, which has an accuracy of just 16-19 per cent, researchers said.

Lifesavers will run further tests with the CrocSpotter in Far North Queensland and look to deploy it by the start of the school holidays, Surf Life Saving Queensland’s Jason Argent said.

“Any added tool in the lifesavers toolbox is a great thing. Making the beach safer is our primary objective,” he said.

The CrocSpotter is “a very concrete example of the human-computer interface at its best,” Professor Blumenstein said.

“We’re getting all the benefits of the technology and giving all of that to the human to make the final decision and take the proper action.”

The “non-invasive” technology has a range of potential applications, and can be used to protect animals and the environment, he said.

“This technology can mitigate against harming animal life, and help in preservation through monitoring habitats, numbers, and migration patterns,” Professor Blumenstein said.

“Automated technology can help with that – it’s not just a drone flying around but the AI also helping in the preservation strategy.”

There is no simple, universally agreed upon definition of what AI is.

A recent report by the Australian Council of Learned Academies (ACOLA) described AI as “not a specific technology, but rather a collection of computational methods and techniques”.

ACOLA defines AI as “a collection of inter-related technologies used to solve problems and perform tasks that, when humans do them, requires thinking”.

AI can be distinguished from simpler software technologies “in its ability to handle problems involving complex features such as ambiguity, multiple and sometimes conflicting objectives, and uncertainty”.

AI increasingly, but not always, includes an “ability to learn and improve over time” – a function known as Machine Learning.