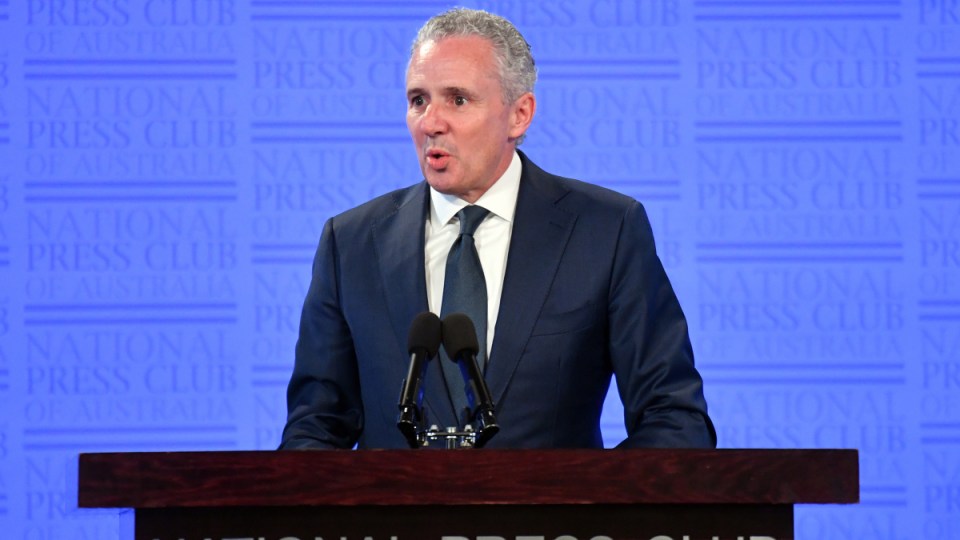 The next decade will be one of "science fiction"-like technological transformation, Mr Penn said. Photo: AAP

Australia must equip itself with the right telecommunications infrastructure and government policies to ride the oncoming technological tidal wave “or be drowned by it”, Telstra boss Andy Penn has warned.

In an address to the National Press Club on Wednesday the chief executive of Australia’s biggest telco said the performance of the NBN and the coming 5G mobile network over the next decade “will significantly influence the success of our economy and our nation”.

“As a society, as an economy, as businesses, and as individuals we have become incredibly dependent on our telecommunication networks,” Mr Penn said.

“That is why telecommunications is fast becoming, and arguably already is, the single most important infrastructure in every company, in every community and in every state in the world.”

The next decade will be an era of unprecedented transformation, with 5G at “the heart of this revolution” alongside Cloud data storage, Artificial Intelligence, automation and robotics, he said.

“We are rapidly approaching a tidal wave of technology innovation where the rate of change will never be as slow as it is today,” Mr Penn said.

“The question we face as a nation and as businesses is, ‘Are we going to surf the crest of this wave or be drowned by it?'”

Will 5G render the NBN redundant?

The successful rollout of the 5G mobile network will be critical to Australia’s future economic success, with about 10 times the capacity of the current 4G network.

Crucially, latency – the lag users sometimes experience when using the mobile network – will be “100 times faster than you can blink”, Mr Penn said.

“While latency can be slightly annoying when streaming a video or loading a web page, it is mission critical in many of the applications in automation and robotics,” he said.

“Imagine for a moment two self-driving cars approaching each other at 100km/h … latency is critically important in that type of situation.”

However, Mr Penn was keen to stress the 5G network will not render Australia’s beleaguered NBN redundant, as some have speculated.

The $51 billion taxpayer-funded mixed-technology network, which experts have said uses “obsolete” technology and creates a “lottery” system that will leave many people worse off is about $5 billion over budget and due to be completed mid-next year.

University of Sydney telecommunications infrastructure expert Tooran Alizadeh disagreed with Mr Penn, saying the NBN, not 5G, will be at the heart of what “makes or breaks” Australia, both from an economic and societal perspective, over the coming decade.

Dr Alizadeh criticised Mr Penn for “hijacking a very important conversation we need to have about the NBN” by implying that “the NBN is the way it is and we have to finish it and move onto 5G”.

“For 5G to work from a technical perspective you need fibre in the ground, and lots of it. You need cell towers, and hard infrastructure for this supposedly soft wireless internet to work.

“Our track record for building hard infrastructure hasn’t been the best.”

NBN Co is currently consulting with telcos, including Telstra, as part of its wholesale pricing review.

RMIT University telecommunications expert Mark Gregory said the proposal demonstrated that “after spending $51 billion on a second-rate obsolete network the Coalition government’s plan for the NBN has been a total failure”.

Surf the tech wave ‘or be drowned by it’: Warning from Telstra boss