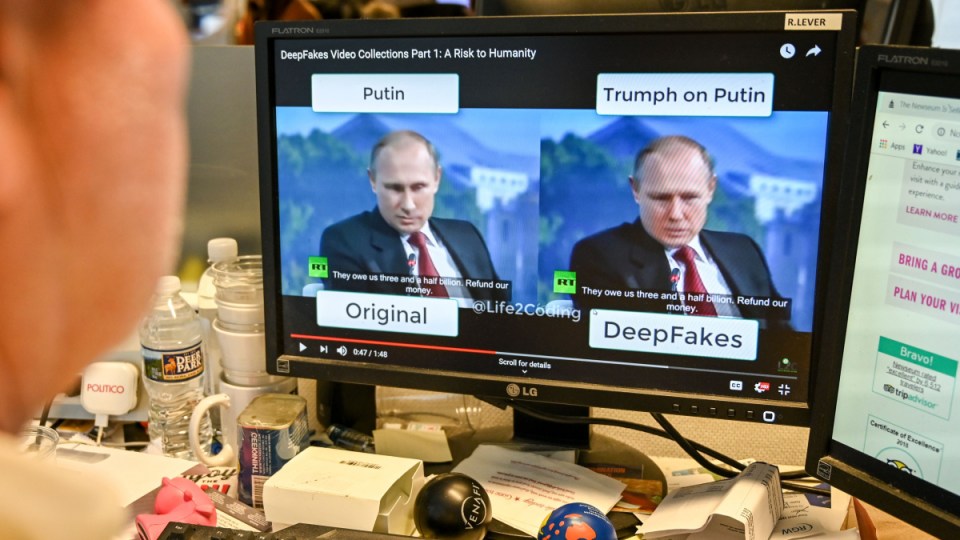 Deepfake videos that manipulate reality are becoming more sophisticated and realistic as a result of advances in artificial intelligence. Photo: Getty

US Congress wants to know whether social media companies have a coherent strategy for handling the threat of deepfake images and videos on their platforms before the 2020 presidential election.

House of Representatives intelligence committee chairman Adam Schiff has written letters to the chief executives of Facebook, Twitter and Google asking about the companies’ policies on deepfakes and their research into technologies to detect the doctored content.

It is the fear of a deepfake disrupting the 2020 election that is propelling Congress into action.

A Deepfake (a portmanteau of “deep learning” and “fake”) uses machine learning to manipulate source material and create content where a person – such as a political candidate – appears to say or do something they did not.

Facebook spokesman Andy Stone confirmed the company had received the letter and said it would respond to Mr Schiff’s concerns accordingly.

Last month Facebook said it would not take action to stop the spread of a deepfake video in which chief executive Mark Zuckerberg appeared to talk about using stolen data to control people’s secrets, lives and futures.

The Instagram video, created by a British art group called Spectre, is being seen as a way to test Facebook’s new fake video policies.

Twitter did not comment on the letter but pointed to a statement last month by Nick Pickles, its global senior strategist for public policy, that said Twitter’s rules “clearly prohibit co-ordinated account manipulation, malicious automation, and fake accounts”.

Alphabet Inc’s Google also declined to comment on the letter.

Major social media platforms have been used to spread disinformation ahead of previous elections.

US intelligence agencies say there was an extensive Russian cyber-influence operation during the 2016 presidential election aimed at helping Republican President Donald Trump get elected. Russia has consistently denied the allegations.

“As we look ahead to the 2020 election, I am gravely concerned the experience of 2016 may have just been the prologue,” Mr Schiff wrote in his letters.

“Social media platforms can catapult a compelling lie into the conversations of millions of users around the world before the truth has a chance to catch up,” the California congressman wrote.

There has not been a well-crafted deepfake video with major political consequences in the United States but the potential for doctored videos to sow misinformation was recently highlighted by a more manually doctored viral clip of House Speaker Nancy Pelosi, slowed down to make her speech seem slurred.

Currently, social platforms exercise total discretion in deciding whether and how to respond. This discretion is thanks to a powerful federal law, Section 230 of the Communications Decency Act, that shields social platforms from civil liability stemming from its users’ posts.

“If the social media companies can’t exercise the proper standard of care when it comes to a variety of fraudulent or illicit content, then we have to think about whether that immunity still makes sense,” said Mr Schiff.