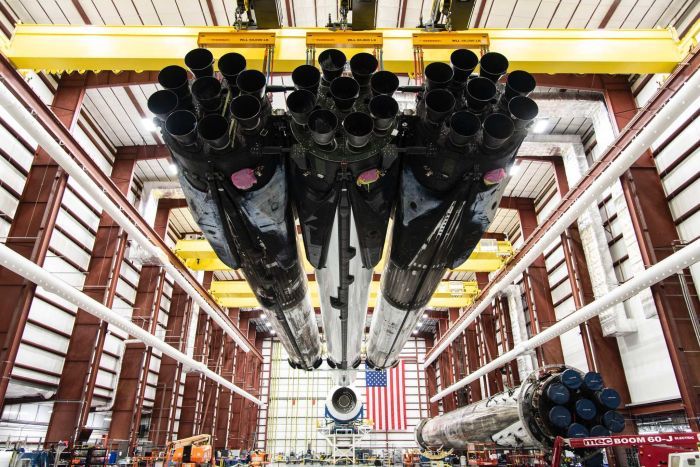 Australian satellites that will improve the nation’s weather forecasting will shoot into space on the world’s most powerful operational rocket on Tuesday, with the help of a small team of experts in the Northern Territory.

SpaceX, the company founded by entrepreneur Elon Musk, and the US Department of Defence will launch two dozen satellites into space on the Falcon Heavy rocket, scheduled to launch from Florida’s Cape Canaveral.

The satellites are owned by a range of stakeholders – including NASA, the Taiwan National Space Organisation, and the US National Oceanic and Atmospheric Administration – and will help improve global weather monitoring accuracy, as well as future spacecraft design and performance.

Australia’s Bureau of Meteorology has booked a ride for six satellites – collectively called the Constellation Observing System for Meteorology, Ionosphere and Climate, or COSMIC-2.

“Personally, being a space nerd, it’s a very exciting thing to be a part of and for the Bureau of Meteorology to be a part of,” chief data officer Dr Anthony Rea said.

“We’re making a contribution to international Earth observation efforts even though we don’t fly our own satellites.”

He said the COSMIC-2 satellites would orbit near the equator and improve Australia’s weather monitoring, particularly for tropical cyclones.

“Once the satellites complete their kind of in-orbit check-out period, the data will start flowing into our real-time operational systems and we will be using the data in our weather models,” he said.

“The satellites orbit around the equator so we expect some benefits in terms of tropical cyclone forecasting and tropical weather prediction.”

It follows the COSMIC mission in 2006, which launched satellites that now orbit the Earth’s polar regions.

According to a statement from the bureau, each COSMIC-2 satellite – which is roughly the size of a standard kitchen oven – carries a precision GPS receiver to determine atmospheric density, temperature, pressure and moisture.

They also carry three instruments that detect electron density and other space weather information in the ionosphere, as a secondary payload.

Using a technique called radio occultation, the COSMIC-2 satellites also collect signals from the Global Navigation Satellite System, including GPS, that are “bent” as they travel through the Earth’s atmosphere.

The bent signal gives scientists an indication of the temperature, pressure and moisture content of the atmosphere – which is used to create more accurate weather forecasts.

Everyone loves a @NASA space launch 🚀and BOM is on board the @SpaceX rocket scheduled to take off 4.30pm AEST today. The #COSMIC2 mission will deliver 6 new satellites, helping us better forecast storms & tropical cyclones watch live from 4pm via https://t.co/dfZ9DQT5vo. pic.twitter.com/62hdSP2Cpf

During Tuesday’s launch, the bureau’s technical experts will be on the ground at Middle Point in the Northern Territory, monitoring the satellite’s deployment and ensuring they work properly.

“This ground station is doing two things. It’s downloading data from the satellites, which will be used in our weather prediction models so we get a direct benefit,” Dr Rea said.

“But this ground station is also providing what we call command and control information from the satellite. So it’s actually sending signals back up to the satellites to tell them how to adjust their orbits or how to do their observation programs.”

He said they would be in contact with counterparts in the US and in Taiwan during the launch and as the satellites settled into their orbits.