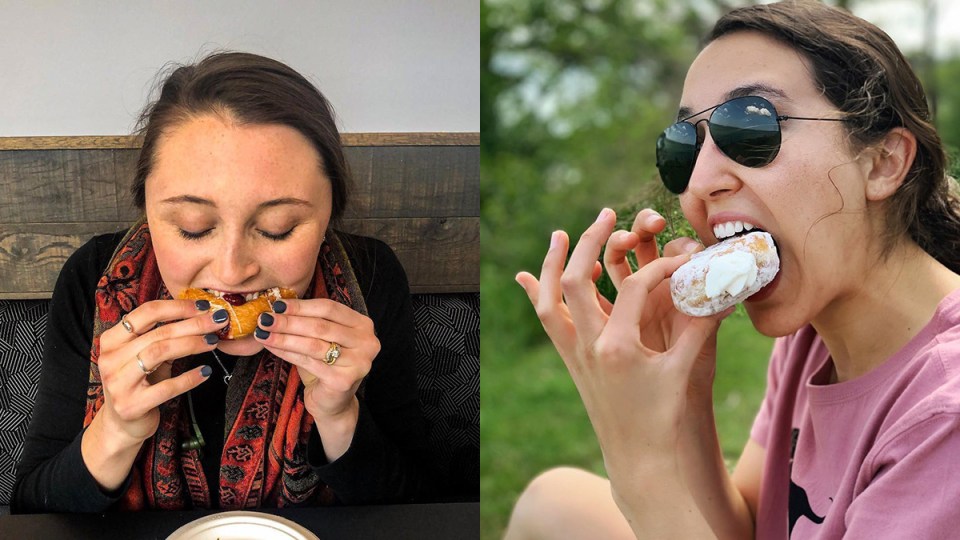 Women are openly sharing photos on Instagram of them tucking into food as a way of pushing back against stereotypes. Photos: Instagram

A while back you may remember the internet had a lot of fun with the “women laughing alone with salad” meme.

As a journalist illustrating food stories, it was rare you could find a stock image of a female actually stuffing the food into her mouth. And even harder to find one where the subject is inhaling a burger or any other type of “unhealthy” cuisine.

It’s also unlikely you’ll see a woman eating on film or television … apparently it isn’t particularly dainty or lady-like. It seems we know women eat, we’re just not comfortable seeing it in action.

It’s not just stock images either. Influencers and bloggers have largely followed the trend of taking photos posing with food, but not necessarily consuming it.

When they do post a photo of themselves “indulging” on social media, it’s often accompanied by some kind of apology or excuse in the caption. – #cheatday is a popular option.

The Instagram account “you did not eat that” fired up to take aim at the trend, and won a following of more than 111,000 people in the process.

Perhaps it’s little wonder that people are reluctant to share photos of themselves eating. Women are body shamed online all the time. Posting photos of yourself scoffing spaghetti or falling face-first onto a buffalo wing leaves you open to comments from trolls telling you to eat less.

American nutritionist Alissa Rumsey has long felt fed-up with the lack of images of women eating on social media. So she and fellow intuitive eating coach Linda Tucker created the hashtag #WomenEatingFood last month, with the goal of collecting pictures of females enjoying a meal “without explaining or justifying what/why they’re eating”.

It soon began trending, with 800-plus women sharing photos of themselves devouring food with gusto.

Ms Rumsey said one of her main motivations in starting the hashtag was to address the body image issues that social media can trigger.

Some people believe that if they follow the eating habits of influencers they too can have their body type, though Ms Rumsey said that was not the case.

“The constant comparison game can lead people down that disordered eating path,” she told The Daily Meal.

Part of Ms Rumsey’s job is to teach clients ways to turn social media into something positive. She recommends a social media “clear-out”, which involves unfollowing anyone who makes you feel bad about yourself or change your eating habits.

“Fill your feed with things that are positive and size-diverse,” she told The Daily Meal.

“Follow people that are sharing non-diet messages and who are in differently shaped bodies.”

Ms Rumsey hopes to see body diversity in the #WomenEatingFood posts. But she pointed out this was no easy feat as there’s “size privilege” at play.

“It’s easy for me, in a more socially acceptable body, to post,” she said.

“I want women to feel safe and empowered posting these photos. But there is a risk of receiving hateful comments if you’re someone posting a photo eating in a larger body.”

“I find it disheartening that anything to do with women having a healthy appetite can be considered a trend,” she told The New Daily.

“It says a lot about society’s warped expectations, but that being said, if a hashtag can take the stigma out of women being able to enjoy a hearty meal, then I’m all for it.”

Levin’s main aim with her food-eating happy snaps is to foster curiosity and empathy through food, using the #EatCuriously hashtag.

“You won’t see Instagram pictures of me applying make-up or a flat lay of my room service, because that’s not what I want to communicate,” she said.

“I post pictures of myself eating lesser-known things in interesting places because I want to encourage others to try something new. Every meal is an opportunity to open your mind, and I’m proud to put my food-stuffed face to that.”