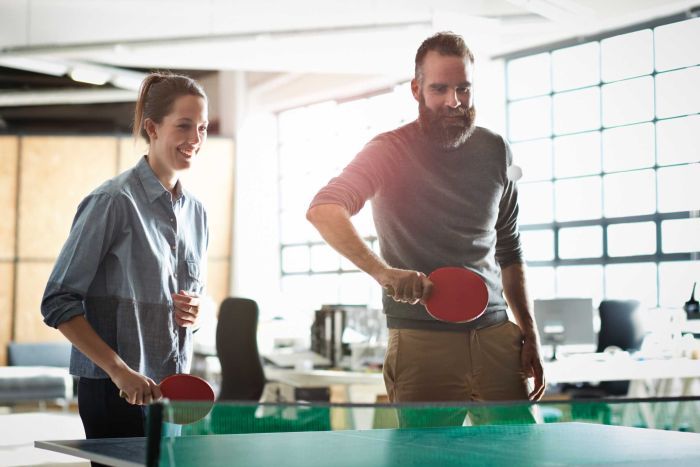 Expect much more socialising in your future office. Photo: Getty

The humble office is set to evolve.

In a world where you can increasingly work from anywhere, companies are still spending money and time on designing and building offices.

She tells RN’s This Working Life that, with four generations working together for the first time in history, staff needs are varied and evolving – and the current office model isn’t cutting it.

This is what she says we’ll see in our offices of the future.

A literal cone of silence

In the future, voice-activated devices will make our offices even noisier than they are now, Gillen says.

She believes they’ll become “one of the biggest disrupters in the workplace”, in more than one sense.

You could throw on your headphones, but a better solution? Acoustic cones.

Forget moving to meeting rooms – Gillen predicts “a situation where the meeting room would come to the people”.

“We would be able to create this acoustic environment,” she says, whereby “a physical hood” can be pulled down to mask sound, effectively cocooning a group of people.

It could then be lifted when it’s not required.

Gillen believes one day workers will wear their own “environmental conditions” to avoid feeling hot or cold at work.

She says there are projections that graphene, a form of carbon that can radiate or extract heat, will become a “super material” that can be woven into clothing.

Once in your clothes, you should be able to control and “personalise” your temperature, Gillen says.

That would have an impact extending beyond an individual’s comfort.

“One of the interesting implications then, for office buildings, is we may no longer be fitting expensive mechanical and electrical heating, and air-conditioning into buildings,” Gillen says.

“We may simply be wearing it ourselves.”

Research on “wearable technology” in clothing has already begun with a high-end sportswear company launching a collection of jackets containing graphene-based products.

The modern open-plan office design is “not a new idea”, Gillen says.

The layout mimics the early 1900s factory environment, where workers were put into rows so they were easily observable and manageable.

The layout mimics the early 1900s factory environment, where workers were put into rows so they were easily observable and manageable.

“It was very much … a command and control structure,” she says.

“What is really fascinating is in all of that time we are still putting people into rows. It has hung on so well as a concept.”

That’s despite the fact that workers’ needs have evolved.

“Now, of course, open plan doesn’t work today because we don’t work the same way as we did in 1904.

“We have video calls. We have voice calls. We collaborate. We need to put things up on walls. We need to spread things out. We need to look over shoulders [of co-workers] to talk about what they are doing on their screens,” she says.

Gillen says open plan has no place in the offices of the future.

“In 20 years I have never designed an open-plan office environment,” she says.

And she’s not alone. Gillen says many architects are today designing open environments with zoned areas.

“Connectivity is a key aspect of offices of the future,” says Gillen.

She wants to create, in her designs, environments that help people “really come together”.

“Walkability” and “connectivity” may sound like buzzwords, but Gillen says they equate to office design that considers the humans using it.

When office spaces allow for “natural collision” and “serendipitous interaction” – around things like coffee bars or central staircases – people are more likely to “collaborate and communicate much better”, she says.

Gillen says open plan has no place in the offices of the future.

“In 20 years I have never designed an open-plan office environment,” she says.

And she’s not alone. Gillen says many architects are today designing open environments with zoned areas.

Other common areas, like rooftop gardens to eat lunch or exercise in, are becoming more and more common in new office buildings.

Not only do they provide “connectivity”, they are a “light, bright, fresh environment”.

She says there’s an increasing number of studies around the impact of the work environment on people.

“There was a frustrating lack of research up until about five or 10 years ago, but now people are really beginning to get [it],” she says.

Prepare to farewell the hot desk in your office of the future.

Gillen says the practice of not having your own desk in an office, but sitting at any empty desk in the building, is going out of fashion.

“It’s not something we use with the vast majority of the organisations we work with any more,” Gillen says.

It’s being replaced by the “home base”.

Home base is a general area where people go to every day without being chained to a desk.

“So, say you had a marketing department, they would come to the same part of the building every day, but within their home base they would have a variety of spaces,” Gillen says.

There are desks, quiet rooms and areas to come together to work.

“People would not sit at the same desk every day, but they would come to the same part of the building every day and that enables them to easily meet their colleagues, to be able to easily access their stuff,” says Gillen.

She says it’s a design change people are already running with.

Today, at least 50 per cent of office space is now given to collaborative areas, whereas 20 years ago around 90 per cent of space would have been rows of desks, she says.

“The role of the office is about community, bringing people together face to face. It’s about learning and mentoring,” she says.

“So, gone are the days of people coming to the office in order to sit in rows and work silently not communicating to each other – you can do that in lots of locations.

“The purpose of coming to the office is to interact with people.”

Office designs are changing: Five predictions for the workplaces of the future