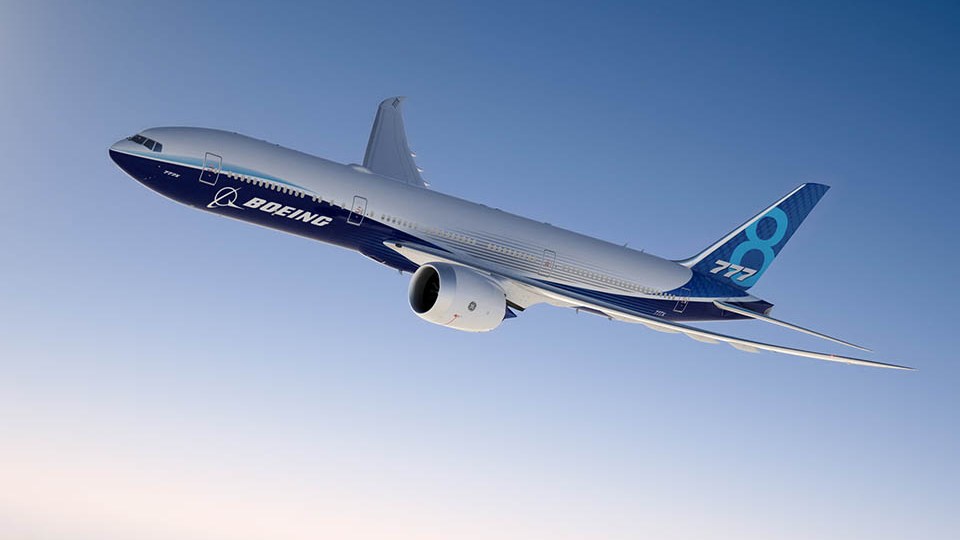 The 777X, described by Boeing as the largest and most efficient twin-engine jet in the world, has a wing span of 72 metres. But when on the ground the aircraft’s distinctive folding wingtips reduce the wingspan to 65 metres.

Airbus announced last week it would end production of the world’s largest passenger plane in 2021, less than 14 years after its maiden flight.

Airbus chief executive Tom Enders and other executives made a stunning yet long-anticipated admission: The A380 was the wrong product at the wrong time, created to feed a demand for 800-seat jets that never materialised.

Emirates will be the first airline to take delivery of the 777X in 2020, with Boeing largely depending on its flagship model to dominate in the wide-body jet category.

This first of the new models of the 777X – the 777-9X – is the larger of two planned versions, and will have three extra rows of seats with the ability to carry 400 to 425 passengers.

The aircraft is also more fuel efficient and flies 400 kilometres further, giving it a 14,080-kilometre range.

One of the most unique features of the 777X is its folding wingtips, which shortens the wingspan on the ground.

This will allow for the aircraft to be accommodated at existing gates, an issue that hindered the growth and popularity of the Airbus A380.

Dr Peter Bruce, airline operations expert at Swinburne University, said the 777X was a close replacement for the super-sized A380.

“The 777X is going to be a superb aircraft and will be excellent in terms of fuel costs,” Dr Bruce told The New Daily.

“It might not have the same luxuries as the A380 but there’s bound to be some highlights on board, especially on long-haul flights.”

Airline Intelligence Research managing director and former Qantas chief economist Dr Tony Webber said the 777X would be a viable alternative as the A380 was too expensive to run.

“When the A380 first came out travellers loved it for its size and comfort. But I think there was a little bit of that new car smell, which eventually wore off,” Dr Webber said.

“You can fly two Boeing 787s between Sydney and Los Angeles with the same fuel consumption as the A380.”

Development talks for the A380 began in 2000. It was intended to be Airbus’s 21st-century answer to rival Boeing’s 1960s-era 747 – and was one of the most ambitious endeavours in aviation.

Its Rolls-Royce engines were quieter than ever, positioned far out on the extra-long wings. Carbon-fibre technology made the massive body lighter and easier to manoeuvre. The double-decker construction offered room for bars, duty-free shops and even showers.

Yet, to detractors, the A380 smacked of hubris, a vanity project by managers who saw bigger as better despite an uncertain market for a plane so huge that airports had to modify runways and gates.

It faced repeated production setbacks and cost overruns. Order cancellations led to a restructuring at Airbus that resulted in thousands of job cuts.

The A380 even fell foul of the Australian Transport Safety Bureau, which found planes landing behind the huge jumbo were more susceptible to wind turbulence.

In a report released this month, the ATSB said there were 179 incidents of wake turbulence between 2012 and 2016, 78 of them at Sydney Airport – and a disproportionate number related to the A380.

As a result, Sydney Airport will change how planes land on its parallel runways.

Boeing’s new 777X a ‘viable alternative’ to failed Airbus A380