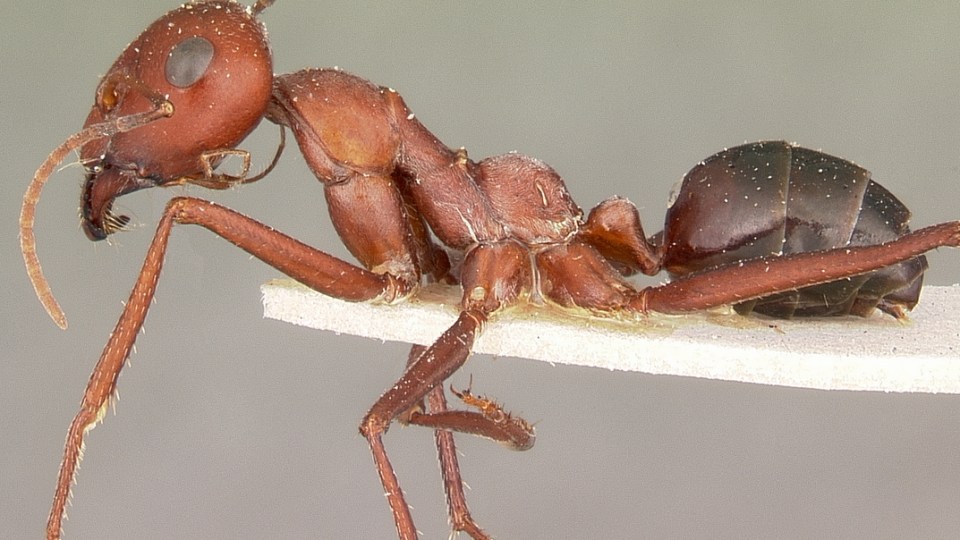 French researchers have built a six-legged robot with a navigation system modelled on that of a clever desert ant – and it has proved more accurate and less prone to collisions than GPS. It also uses much less energy and computing power that simultaneous localisation and mapping (SLAM) methods.

It also appears to offer a more covert method for getting around – because the navigation system doesn’t rely on satellites or is otherwise on the grid.

The somewhat creepy-looking AntBot owes its genius to cataglyphis ants – which have a robot-looking head, by the way – that manage to travel several hundreds of meters in glaring sunlight in the desert to find food, moving in a squiggly, random and often looping fashion, then return in a straight line to the nest, without getting lost.

Ants usually and most famously rely on pheromones – scent trails, in layman’s terms – to communicate with fellow members of their nests, but also to create a lifeline back to the nest. As they go searching for food, ants leave behind tiny droplets of pheromone which they secrete from glands all over their bodies. The droplets are much like the breadcrumbs left behind by Hansel and Gretel, a trail to guide them home.

But desert ants have the problem of extreme heat – which evaporates their pheromones as soon as they’re secreted. So they’ve had to develop an alternative and more complex navigation system.

In short, they use a combination of celestial navigation, following patterns of polarised light – which human eyes can’t discern – and a kind of step-counting.

The mystery of path integration

In their paper, the researchers from the French National Centre for Scientific Research and the Institute of Movement Sciences, Aix-Marseille Université, describe it this way:

“To navigate safely in this hostile environment, desert ants assess their heading from the polarised pattern of skylight and judge the distance travelled based on both a stride-counting method and the optic flow … the rate at which the ground moves across the eye. This process is called path integration (PI).”

Scientists have been trying to work out how path integration works for decades.

The researchers have apparently come up with a no-frills version, having endowed their AntBot with a similar set of tools: two optical sensors that watch the sky, and others that measure optic flow and steps taken.

The scientists note that other methods of endowing mobile robots with outdoor localisation “are still prone to considerable drift and uncertainty”.

They tested several “ant-inspired solutions” to outdoor homing navigation problems on a legged robot using two optical sensors equipped with just 14 pixels, two of which were “dedicated to an insect-inspired compass sensitive to ultraviolet light”.

The other 12 pixels were dedicated to optic-flow measurements.

The mean homing error recorded during the overall trajectory was as small as 0.67 per cent under lighting conditions similar to those encountered by ants.

This work opens up new strategies for navigation in autonomous vehicles and robotics.

Could they take over or go rogue off the grid?

Dr Simon Coghlan is a research fellow in Computing & Information Systems  at the Melbourne School of Engineering, and an ethicist working in robots.

“Like all powerful technologies, robots like the AntBot – which exploits biomimicry to achieve self-navigational possibilities – have the potential for positive and worrying outcomes,” he said.

In the absence of GPS, he said, AntBot may be capable of greater surreptitious movement, including spying, or delivering explosive devices, for potentially good and bad reasons.

“Another biomimetic feature would be the ability to swarm, so a bunch of insect-like robots could together deploy this form of self-navigation to complete tasks together, without as much reliance on positioning or online systems that could be shut down or interrupted,” he said.

And this is where it could go very wrong. Dr Coghlan noted that an episode of the Netflix near-future series Black Mirror “depicts swarms of Autonomous Drone Insects that are supposed to be there to replace the plummeting bee population, but which are hacked and directed to kill people”.

The implication being: AntBot-style technology might be similarly difficult to stop if it went rogue.