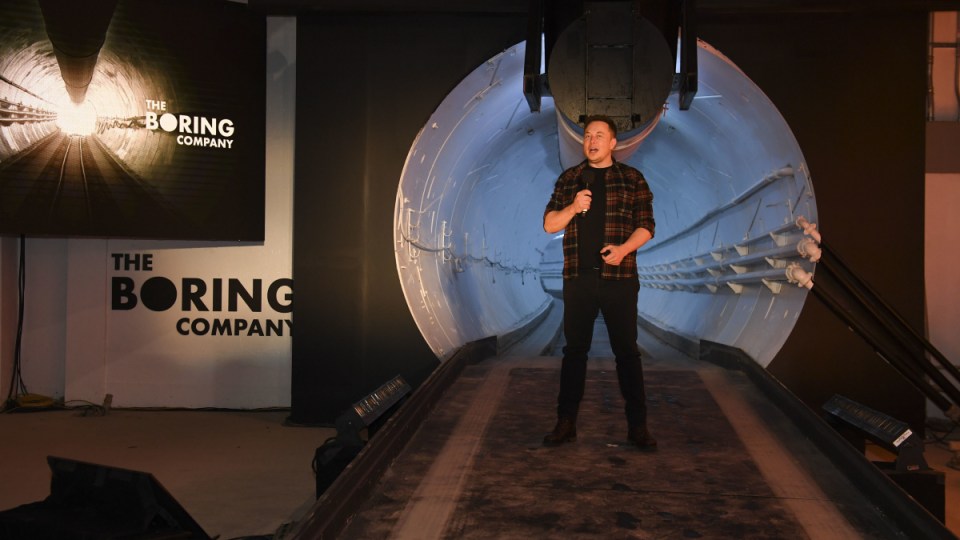 Elon Musk promised in December 2016 to promising then to "build a boring machine and just start digging". Photo: AAP

Elon Musk has unveiled his underground tunnel, allowing reporters to take some of the first rides in the revolutionary albeit bumpy subterranean tube – the tech entrepreneur’s answer to what he calls “soul-destroying traffic”.

The station consists of a wall-less elevator that slowly took the car down a wide shaft, roughly nine metres below the surface.

“We’re clear,” said the driver, who zipped into the tunnel when a red track light turned green, making the tube look like something from space or a dance club.

The ride was bumpy enough to give one reporter motion sickness while another yelled, “Woo!”

“For me it was a eureka moment,” he told a room full of reporters. “I was like, ‘This thing is going to damn well work’.”

He said the rides were bumpy now because “we kind of ran out of time” and there were some problems with the speed of his paving machine.

“It’ll be smooth as glass,” he said of future systems.

“Traffic is soul-destroying. It’s like acid on the soul,” he said.

Traffic is driving me nuts. Am going to build a tunnel boring machine and just start digging…

On Tuesday, he explained for the first time in detail how the system, which he simply calls “loop”, could work on a larger scale beneath cities across the globe.

Autonomous, electric vehicles could be lowered into the system on wall-less elevators, which could be placed almost anywhere cars can go. The cars would have to be fitted with specially designed side wheels that pop out perpendicular to the car’s regular tires and run along the tunnel’s track. The cost for such wheels would be about $US200 or $US300 ($280 to $420) a car, Mr Musk said.

A number of autonomous cars would remain inside the tunnel system just for pedestrians and bicyclists. Once on the main arteries of the system, every car could run at top speed except when entering and exiting.

“It’s much more like an underground highway than it is a subway,” Mr Musk said.

The demo rides were considerably slower – 64km/h – than what Musk says the future system will run at: 241km/h.

Tuesday’s reveal comes almost two years to the day since Musk announced on Twitter that “traffic is driving me nuts” and he was “going to build a tunnel boring machine and just start digging.”

Soon after, he began The Boring Company, tongue in cheek intentional.

For the privately funded test tunnel, Musk acquired a tunnel-boring machine that had been used in a San Francisco Bay Area project and put it down a shaft in a parking lot at the SpaceX headquarters.