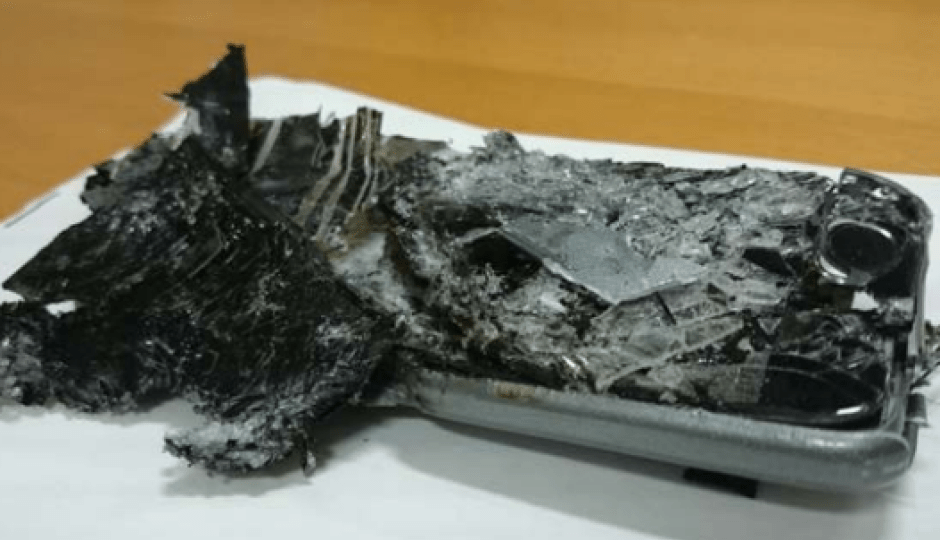 This phone ignited after it was crushed in a similar incident on a Qantas flight in 2016. Photo: ATSB

Ever wondered why the in-flight safety videos tell you not to move your seat if you drop your phone?

A Qantas business class passenger learned the hard way after dropping their phone during a flight on an Airbus 380 from Los Angeles to Melbourne on Wednesday morning.

After their phone became stuck in their seat, they attempted to retrieve it and moved their seat in the process, crushing the device.

A Qantas spokesperson said the phone then began “smoking”, before the cabin crew “contained the situation”.

The captain then spoke to the operations centre before completing the flight into Melbourne.

A phone was destroyed in a similar incident in 2016, when the lithium battery of a passenger’s phone was crushed in a seat mechanism and caught fire.

The incident prompted the airline to issue a reminder to passengers not to attempt to pick up any electronic devices dropped during the flight.

“This incident shows why we ask passengers to seek help from our cabin crew in retrieving their mobile phone,” the Qantas spokesperson said.

In its investigation into the 2016 incident, the Australian Transport Safety Bureau (ATSB) cited the United States Federal Aviation Administration’s guidelines which warn of the risk posed by lithium batteries.

“Lithium batteries are capable of ignition and subsequent explosion due to overheating,” the administration said.

“Overheating results in thermal runaway, which is a chemical reaction within the battery causing the internal temperature and pressure to rise.

“The result is the release of a flammable electrolyte from the battery and, in the case of disposable lithium batteries, the release of molten burning lithium.”