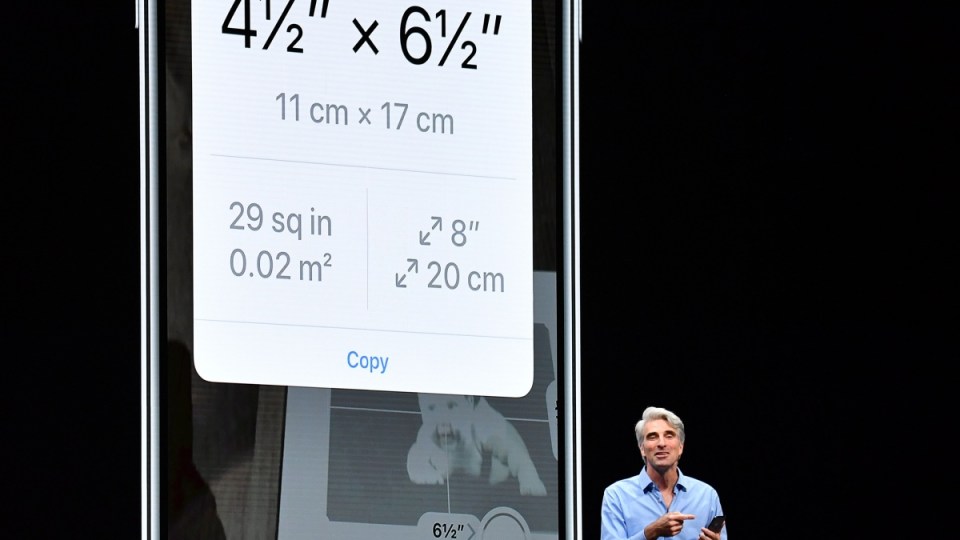 Apple fans are going crazy for the new ‘Measure’ app included in the latest update to the iPhone operating system.

The feature in iOS 12, released in Australia on Tuesday, allows users to measure anything – coffee tables, TV screens and even cats and dogs – with the phone’s camera.

Several users took to social media saying the app was “magic”, “revolutionary” and that “rulers were so last century”.

And plenty amused themselves by posting the measurements of their pets.

iOS 12 is preeeeettttyyyy cool. Lots of people are put this tape measure to good USE. pic.twitter.com/nylbgJi2Om

While there has been similar apps in the App Store for a while, the ‘Measure’ app was designed by Apple specifically for iOS 12.

It is supposed to work better with an iPhone 8, iPhone X and newer models being released on Friday, as those cameras are better optimised for what is known as ‘augmented reality’ – technology that overlays a computer-generated image over a view of the real world.

Other augmented reality features include ARKit 2, which makes it possible for developers to create more immersive experiences for users.

How to use the app

Open the Measure app on iPhone.

Point the camera at the object you want to measure.

A plus button will appear on the screen, along with a circle that has a dot in the middle. Point the dot at the starting point you want to measure, then press the plus button.

The bottom-right photo button allows you to take a picture of the measurement, and the plus button adds points of measurement.

But be warned: When The New Daily used the app on an iPhone 8, it glitched several times – and even temporarily disabled the camera. This may or may not have been an isolated problem.

The new iOS 12 update comes with several new features and a redesign of some of the most commonly used apps.

The update also promises to boost speed, allowing older models including the iPhone 5s and 6, to perform faster.

As The New Daily has previously reported, new features such as Screen Time monitors the amount of time a user spends on a specific app, a category of apps and individual websites, plus the number of notifications received and total hands-on time.

Users can then access daily and weekly reports to help them monitor their digital habits.

They can also set time limits on apps, to display an alert when the limit is reached.

Parents can monitor their child’s usage from their own device, making changes to access accordingly, such as setting a time period when the device can’t be used.

Just as Screen Time gives users more insight into how they use their devices, Instant Tuning gives them new ways to reduce interruptions throughout the day.

Siri also makes intelligent suggestions about alerts based on how users interact with them. While message threads and notification topics are grouped together, so it’s easier to see what’s important at a glance.

Memojis will allow users to create a personal digital self to add to messages and videos. Along with new Animoji options, messaging services will become more personal and creative.

With new group options available in FaceTime, Apple users can set up video calls between various iOS users and even add Animoji animal stickers for a personal touch.

FaceTime will have an update released in March, allowing up to 32 people at once to be part of the group call. The tile of the person speaking gets larger automatically, making it easier to never lose track of the conversation.