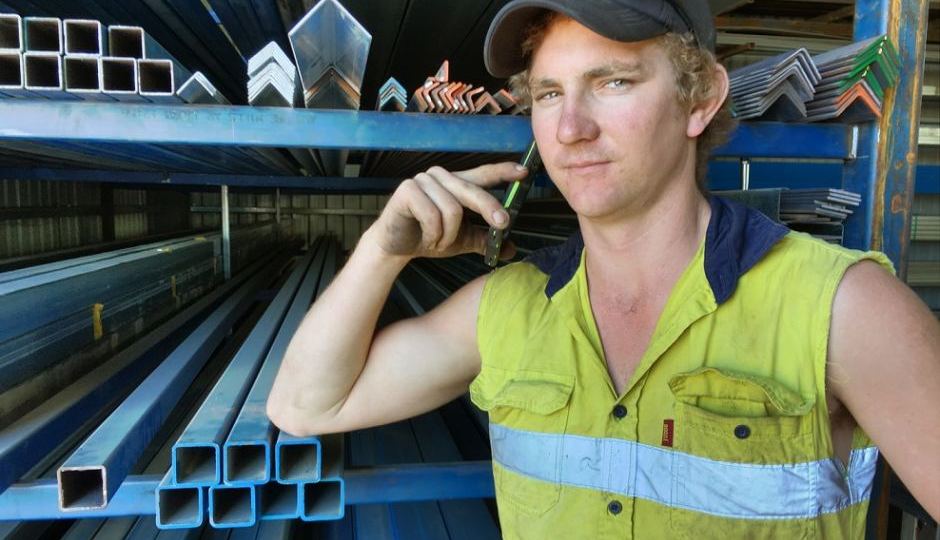 Ethan Fitzgerald's steel and engineering business has been bombarded with calls after his number was spoofed. Photo: ABC / Rachel Carbonell

Do you try to screen your calls for scammers?

Phone scam criminals have a trick to get around that.

It is called phone spoofing.

Phone spoofing is when someone disguises the number they are calling or texting from by changing their caller ID. Some businesses do this legally and for legitimate reasons.

But phone scammers around the world have also cottoned onto it.

They hijack or imitate phone numbers, either to imitate a person, business or department to get money or information. Or to appear like a local or legitimate number to increase their chances of getting through to their victim.

Sometimes they randomly spoof the number of an ordinary person. And then things get really complicated.

As Ethan Fitzgerald can tell you.

One day last month, his phone started ringing off the hook with hundreds of phone calls from around Australia.

They were all saying the same thing — they had missed a call from his number.

“My phone would just jam up — it was unreal.

“I had one bloke, he rang me up and he threatened to go to the coppers.

“My phone number had called him about 25 times in a day. I tried to explain to him that my phone had been hacked.”

The affected number was Mr Fitzgerald’s business landline for his steel and engineering company at Wangaratta in north east Victoria.

Mr Fitzgerald said he was faced with the prospect of having to change his number, not an attractive prospect given he had recently bought the business and all the goodwill that came with its phone number.

“I got clientele that probably have the number written on their shed wall,” Mr Fitzgerald said.

“They ring me up, old farmers, real old-school people, they’ll still have this number in their old diary book … they ring that number for a bit of steel.”

Mr Fitzgerald said he was receiving so many calls his business phone was rendered temporarily useless.

“I probably lost two days and in two days I could make upwards of $10,000 just by sitting in the office organising things,” he said.

Mr Fitzgerald went to Telstra about the problem but was met with a blank.

“When I spoke to Telstra, I was up at the Telstra shop, he actually just stood there and said ‘I can’t see a problem. I don’t think there is one’.”

Professor of cybersecurity at University of the Sunshine Coast, Dave Lacey, said it was more than likely Mr Fitzgerald’s number had been spoofed by a phone scammer.

In this case it appears scammers have randomly picked Mr Fitzgerald’s number to make scam calls from.

“In a way what they’re trying to do is distance themselves from the crime,” he said.

“By choosing any particular number in the community – whether it be just a community member or a small business – they’re already separating themselves from the criminal activity that’s going on when they’re making those telephone scam calls.”

Professor Lacey said while many people probably answered that call, others missed it and called back, only to reach a confused and frustrated Mr Fitzgerald, rather than the phone scammer who called them.

This kind of phone spoofing can be a real problem for the elderly. Let alone those living in the country who are often more reliant on their landline services.

One case involved Joy (not her real name), a 69-year-old woman who lives alone in a small rural town in western Victoria, doesn’t use a mobile phone or the internet and she has had the same landline phone number for more than 30 years.

One day, out of the blue, she too started being bombarded with calls from people all over Australia.

Some of the calls were abusive, from people angry about the call or message they had received from her number.

“I was getting some terrible messages left on them when I didn’t answer, when I wasn’t home,” Joy said.

“I got a couple of swear words from one of them and another one was going to ring the police.”

The phone barrage has left Joy feeling anxious and upset, and it’s affecting her health.

“I don’t want to answer the phone and I’m not eating much. Everyone is telling me I’m losing more weight,” she said.

When she does dare answer the phone, she pretends she is not alone.

Professor Lacey said it looks like Joy has also had her number spoofed.

He said phone spoofing, and the scams that go along with it, could take a particular toll on those in the country.

“There would not be a week that goes by when we don’t have a member of the community in regional Australia that says: ‘I just simply refuse to answer my landline now’,” he said.

“When you are in regional and remote parts of the country, communication is your lifeline.”

Professor Lacey said Joy and Mr Fitzgerald had probably been caught up in an illegal international phone scam.

“I think their landline number has been deliberately stolen by a transnational crime syndicate so that when they make phone calls to scam Australians, the phone number that they look like they’re calling from is actually another victim in the country or a community member,” he said.

“And as a result of that, community members or small businesses are starting to receive many calls from Australians who are quite rightly fed up with transnational organised crime calling their number.”

While deceitful phone spoofing is not explicitly outlawed in Australia, fraudulent use of caller ID is illegal.

Professor Lacey said phone spoofing was not regulated by one body or law in Australia, which could make it hard for consumers affected by phone spoofing to get help.

“There’s no shortage of organisations in government or indeed industry that have a stake,” he said.

“The challenge that we find is that there does not appear to be one absolute owner of that problem.”

And he said phone spoofing was set to get worse in Australia.

“Our expectation is that in the next 12 to 24 months we’ll start to see that grow and that’s based purely on the assumption that that’s what we’re seeing the same criminal groups do in other countries,” he said.

He said it could be a difficult problem to investigate or solve, but phone companies should be educating their staff to at least inform their customers when it appears they have been targeted by phone spoofing.

Telstra said it had been in contact with Joy help resolve the problem and it had tried to get in touch with Mr Fitzgerald.

Telstra said it was not immune from cyber crime and has tips for consumers on its website.