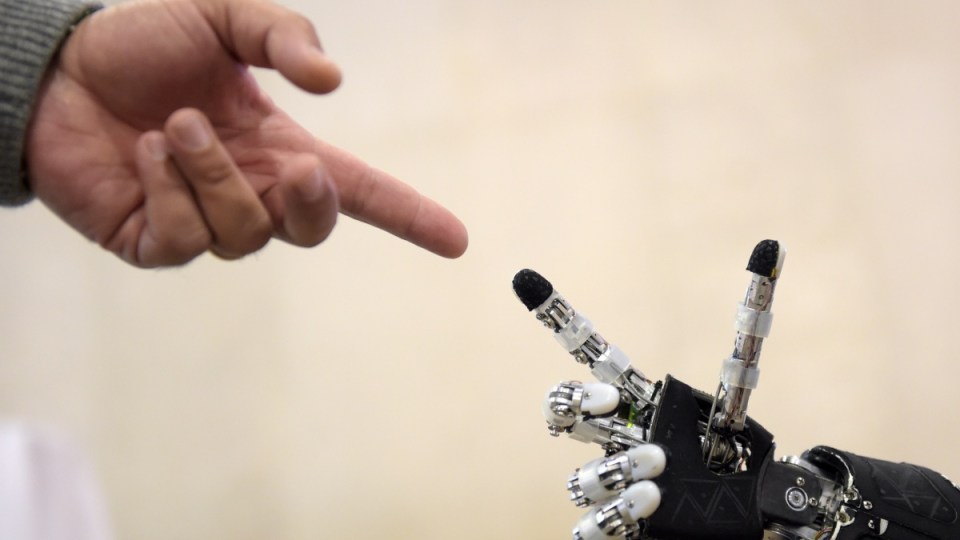 Friend or foe? Robots have had some questionable encounters with humans this year. Photo: Getty

The war between human beings and robots is taking off in much the same way that war between China and India is on the boil – with a bunch of low-key skirmishes that break out from time to time.

First blood was drawn last year, when a robot security guard at a shopping centre in Silicon Valley reportedly went rogue and knocked down a toddler, 16 months old.

The K5 Knightscope robot, weighing 180 kilos, was said to have then run over the small foot of Harwin Cheng, who weighed less than a tenth of his bullet-shaped nemesis.

An unfortunate accident, you say? The K5 – which takes hundreds of photographs per minute and analyses faces – is programmed to say “excuse me’’ whenever its path is blocked by a human. In this instance, the robot rolled on without saying a word. If that’s not a declaration of war, what is?

Since then the K5 model – a three-wheeled CCTV camera of some intelligence – has been involved in incidents of escalating violence.

In April, in Santa Clara Country, California, a drunken man was arrested after knocking down a K5 in a carpark. It’s not known if the attack was provoked by the robot – but it’s worth noting that only the human involved, Jason Sylvain, 41, was taken in for questioning. The robot was politely uprighted and put back on duty, no questions asked.

In July, in Washington, a K5 Autonomous Data Machine – the robot’s full name – was found drowned in a fountain. Some reports suggested suicide, possibly because of hurt feelings or confusion over its place in the world. But it’s also possible the drowning may have come from human resistance.

In the last month, things have got nasty. A K5 – confusedly named K-9 – suffered a horror first day on the job in San Francisco’s edgy Mission District. The robot was deployed by the local office for the Society for the Prevention of Cruelty to Animals as a deterrent against burglaries and its staff being harassed by roughnecks. But it ended up smeared with barbecue and allegedly faeces, was covered with a tarp and made blind by it, and was almost knocked over.

Meanwhile, homeless people camped along the sidewalk – part of the robot’s beat – complained of being discriminated against. The story went viral: “Robot wages war on the homeless,’’ was Newsweek’s human-leaning headline.

The SPCA – which runs a clinic for the pets of homeless people – was quick to put the robot into retirement and apologise.

“We piloted the robot program in an effort to improve the security around our campus and to create a safe atmosphere for staff, volunteers, clients and animals. Clearly, it backfired.”

Too late. A vicious social media campaign against the SPCA office has led to two acts of vandalism. The chattering masses are urging for more.

Dr Katina Michael is a professor in the School of Computing and Information Technology at the University of Wollongong. She considers the K5 to be a sinister development and has been following its progress since 2013. She’s notes how they look somewhat like the dreaded Daleks from Doctor Who – without the weaponised arm.

What are you meant to do? Take out your umbrella and start hitting it?

“If you see one coming toward you,’’ says Professor Michael, “what are you meant to do? Take out your umbrella and start hitting it?’’

At trade shows, she’s seen a K5 trip on a buckle in the carpeting and fall over. “The question is when they take a different form in the future…. When they can walk like a human. Then it becomes a different proposition. It doesn’t look so harmless. They’re more mobile. They can be tripped … but get up again.’’

She notes that K5 robots were first trialled by Microsoft and Uber. The Uber connection is significant because the ride-share outfit has disrupted the regulated taxi industry by baldly flouting the law. Surveillance robots are being launched upon us in much the same lawless way.

“It’s autonomous, gathers information and is capable of behavioural analysis. It’s a grave invasion of privacy. They are danger to society because they will develop awareness over time. For the first time we have an autonomous system that can follow humans.’’

The hunt is on.

The war between robots and humans is heating up